Gate to the future 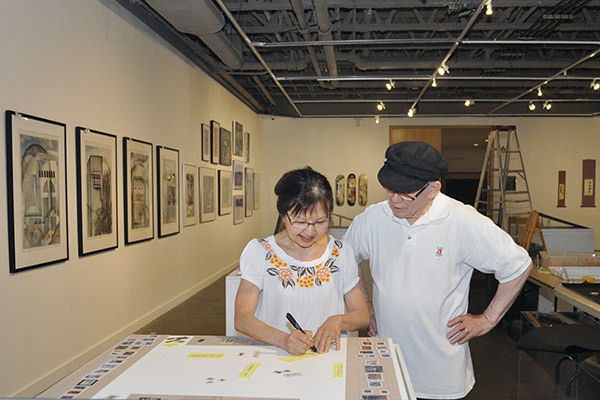 
New Hamburg artist, Gloria Kagawa, sees her new exhibit like walking through a gate into the future. Kagawa and her husband, Martin Holmberg, set up her exhibition, Gate: ink and paint, at the JCCC Gallery in Toronto.

TORONTO — New Hamburg, ON, artist Gloria Kagawa is calling her 13th solo exhibition, Gate: ink and paint, the “first day of the rest of her life.”

Over the past eight months, Kagawa and her husband have been sorting through 35 years of Kagawa’s artwork for her first show in Toronto and largest to date and at the Japanese Canadian Cultural Centre Gallery, Aug. 18 to Oct. 24.

After an unexpected open-heart surgery in May 2017, Kagawa reveals she was feeling finished. The surgery to repair an aortic aneurysm and replace two valves came as a surprise to Kagawa, who thought she was just getting older and feeling tired.

“After that surgery, I felt aimless, like what now, what can I do. I hate to say it, but am I over the hill, or a has been. But when I got this invitation to have a show, that was rejuvenating,” she says. “I had purpose and it gave me a sense of having to continue.”

Kagawa and her husband began to sort through years of paperwork, grants, applications and articles from previous shows as well as artwork, mostly kept in their home. 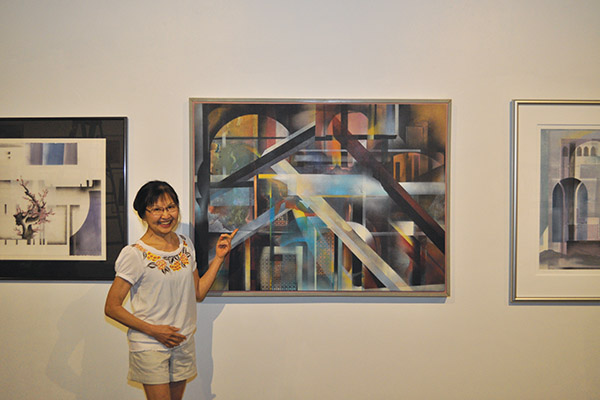 Gloria Kagawa explaining the story behind her piece Contention, which will be at the Japanese Canadian Cultural Centre Gallery from Aug. 18 to Oct. 24.

Initially, Kagawa says she was worried there would not be enough to fill the gallery. Instead she was overwhelmed with the amount of artwork she had stored in her home, not including the hundreds of pieces she has sold and rented over the years.

As a result, the exhibit is completely her. The four walls in the JCCC Gallery are covered with over 60 of Kagawa’s pieces. The work ranges over 35 years. The earliest piece is from 1983, not including a clay relief from 1976, a throwback to Kagawa’s beginnings in clay work.

Her art career started at the University of Waterloo, initially studying languages. Kagawa says she took an elective course in fine arts, and instantly fell in love with doing the exercises, mixing colours and learning the basics. She changed her major to fine arts, and had her first exhibition at the university in 1977.

Kagawa now works out of her home studio in her farmhouse in New Hamburg. In winters when her studio is too drafty, her dining room table becomes her studio. Kagawa’s artwork is diverse, mixed media that explores painting, drawing, photography and printmaking, and she enjoys experimenting in different mediums and materials.

“I have a lot of architectural images in my work as well,” says Kagawa. “I find windows and doors mysterious and intriguing when I used to drive across the country.”

Kagawa, 70, is a third-generation Japanese American from Colorado. She moved to Toronto with the wave of war resisters in 1968. She used to take long drives to visit her home in Denver and found herself intrigued by different architectural elements, especially the tall buildings in Chicago.

“I would think, there are stories behind all of the windows,” Kagawa clarifies. “It tells you something about the people in a way, how they live, and the conditions, I mean; you imagine what life is like.” 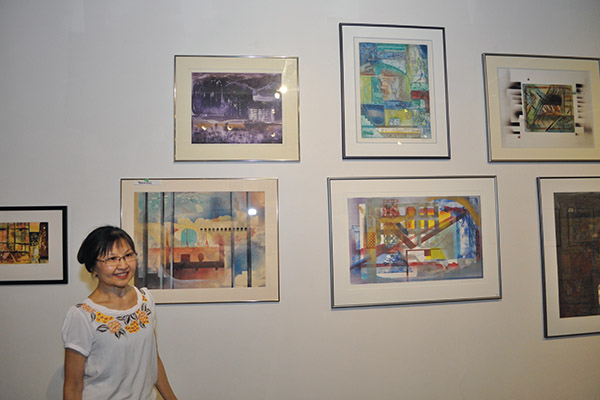 Kagawa explains that each time she starts a new series, she goes through her previous work, but still putting together this exhibit, she was shocked by how much artwork she actually had. Preparing for this show and looking through her old work, she began to see it in a new way, she reveals.

“I did find that some of the pieces that I liked and kept and even named, I put them up and turned them upside down and liked them even better,” she adds.

So don’t be alarmed if her signature appears sideways on certain displayed pieces, it’s intentional.

More than that, Kagawa found she appreciated many of her pieces more than she initially did when she first created them. She found she was often too critical of herself.

“I found that they are good. I have difficulty appreciating myself,” says Kagawa. “Sometimes you learn about yourself, by looking at your art.”

Kagawa says she hopes people who visit the gallery will be impressed and remember something or feel connected to her artwork in some way.

“I know that I have biases,” explains Kagawa’s husband, Martin Holmberg. “But still, this work transcends that, it elevates me, I feel cultured. It can take a dreary day, or a dreary time in your life and brighten it a bit, and I like to think that Gloria tries to make the presentation with an element of hope in there.”

Kagawa says art has helped her grow her self-confidence, and hopes visitors to her exhibition can feel and see that as well.

“Doing the art helped me a lot, it helped me accept myself and express myself,” explains Kagawa.

“I always have trouble speaking, verbally and in writing, I still do. I pause a lot, I can’t think of the right words, and when I write it takes forever.” 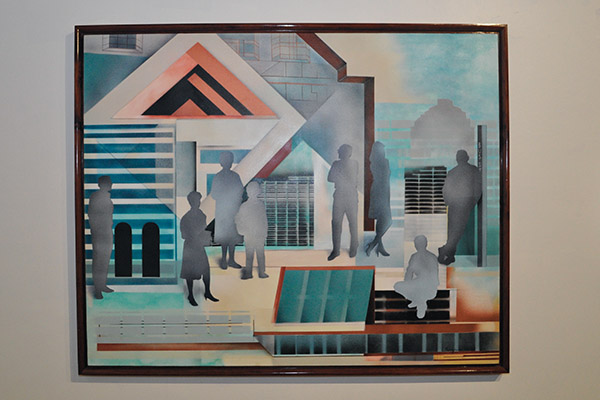 Gloria Kagawa’s Waiting for the bus, which will be on display at the JCCC Gallery.

It is long overdue to have Kagawa’s art on display in Toronto, and a retrospective exhibition at the JCCC is a fitting way to honour her artistic achievement, explains Bryce Kanbara of the art committee at the JCCC.

“On one level, Gloria’s work is really beautiful and technically brilliant,” says Kanbara. “Her words in the [exhibit] brochure interview, however, help us see and feel the strong, emotional undercurrent that’s also there. She’s worked through personal ordeals, along with the varied challenges that are inherent in art making, to rise up.”

Kagawa overcame domestic abuse in her previous marriage to gaining international recognition in art shows around the world. As well, Kagawa was voted Waterloo Region’s Visual Artist of the Year in 2011.

Kagawa says she now has ideas for new projects, and is not planning on stopping anytime soon, and is looking forward to the future now with new excitement.

“I think that’s why the show is called Gate, because gate is not only welcoming everybody to this show and my work, but, I think I’m going through a gate too, into the future. And I’m not sure quite what that holds for me, but maybe I’ll be less…”

After a pause, she says, “Concerned.”


Kelly Fleck has done some fantastic work in the past year, and she deserves more credit for it. Her essay writing has been remarkable, and if more people don’t acknowledge that, I will be quite sad in the coming days.