George Takei on Trump: “Together you can and will defeat him” 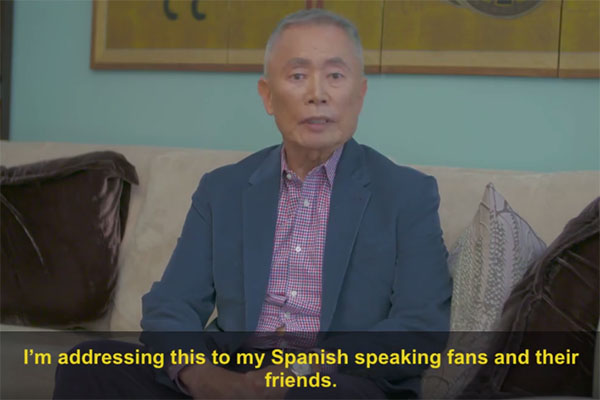 “Back then they simply said, ‘a Jap is a Jap’ and we lost our homes and freedom, even though two thirds of us were U.S. citizens,” George Takei says in his Facebook video.

Japanese American actor and activist George Takei is urging Latinos to vote against Donald Trump in the upcoming presidential election.

In a video posted on his Facebook page, Takei relates Trump’s fear-mongering about Mexicans and Mexican Americans to that of Japanese Americans and Canadians after the bombing of Pearl Harbor.

“He is playing upon the same fears and ignorance that once led this country to intern my family,” Takei says in the video.

Speaking entirely in fluent Spanish, the ‘Star Trek‘ actor shares the history of Japanese American internment on the West Coast in the video.

After Japan attacked Pearl Harbor during the Second World War, the U.S. government forcibly evacuated Japanese-Americans living on the West Coast. Approximately 120,000 Japanese Americans were held in internment camps for the next four years. In Canada, over 20,000 Japanese Canadians were interned; many were Canadian citizens.

“We were targets simply because we happened to look like the people who bombed Pearl Harbor,” Takei says.

“When Trump says Mexicans are rapists and drug dealers, it is his way of similarly dehumanizing whole groups so that he can set his plans in motion,” he says.

Takei also shares his personal experience being interned as a young boy in the video.

“I remember my mother’s tears as we took with us only what we could carry, and lost all we had worked so hard for,” he says.

Takei recounts his family being forced to live in horse stables at the local racetrack. The U.S. government had evicted Japanese Americans before it had finished building the camps where they would be held prisoner for the next four years.

The video, which was posted on Wednesday, already has nearly 8 million views and counting and over 200,000 shares over the web. As well, there are nearly 75,000 comments on the video, mostly supporting Takei, though there are some comments from defenders of Trump.

Takei urges Latinos register to vote, and vote against Trump. Latino voters have enough sway to stop Trump in swing states; Colorado, Nevada and New Mexico, he says in the video.

“Trump is a dangerous man,” he says.” But your votes can ensure he never comes to power and history does not repeat itself.”