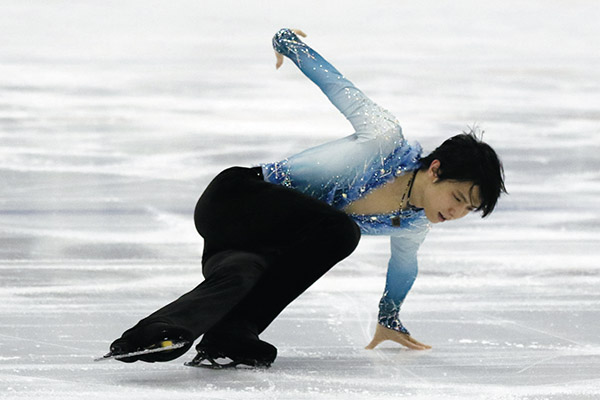 
Yuzuru Hanyu’s signature move, the inside edge hydroblade, also called ‘Shoot the Moon’, where the skater glides on the edge of their blade, with their bodies extended and close to the ice. Photo by: Dr. Jonathan Eto.

As the crowd started to file into the arena, one thing became very clear—they were here to see Hanyu. With homemade banners and posters lining the top of the stands and Japanese flags waving everywhere, fans were in for a treat.

“When I got here at six in the morning, there were over 500 fans lined up around the corner to see the Japanese skater,” said one of the security guards. “They’re not even allowed in until 7, and that’s only for practice.”

The competition didn’t start until noon, but already there were boxes filled with gifts for the ‘Ice Prince’ at the front gate. The 23 year-old from Sendai, Japan is currently one of Japan’s most popular athletes and already on the path to become a figure skating legend. Carrying momentum from his back-to-back Olympic golds in Sochi 2014 and Pyeonchang 2018, Hanyu is the first male singles skater since America’s Dick Button, to accomplish this feat (in 1948 and 1952).

Hanyu holds several world records including the highest score (112.72; 2017 CS) in last year’s Autumn Classic International. He is the first skater to achieve more than 100 points for Short Program, and the highest score (223.20; 2017 World Championships).

He was the first to achieve more than 200 points in a Free Skating event and of course the highest score (330.43; 2015-16 Grand Prix Final) and first to achieve greater than 300 points in combined total scores. He has also maintained the top spot in world rankings over the past five seasons and the first skater to land a quadruple loop in competition. No singles skater has ever won three consecutive Grand Prix Finals, yet Yuzuru has won four (2013-16).

Since 2012, Yuzuru has made Canada his second home, coached by former two-time Canadian Olympic silver medalist, Brian Orser, at the Toronto Cricket, Skating and Curling Club. After skating a nearly perfect short program, earning a score of 97.74, the crowd rose to their feet, some girls crying out of joy, throwing flowers and Winnie-the-Pooh plushies on the ice.

Figure skaters often carry around their own tissue boxes as they blow their noses, from the cold conditions and athletic activity. Since 2010, fans noticed that Hanyu carried around a box with a Winnie-the-Pooh plush cover, and began bringing him the plushies. 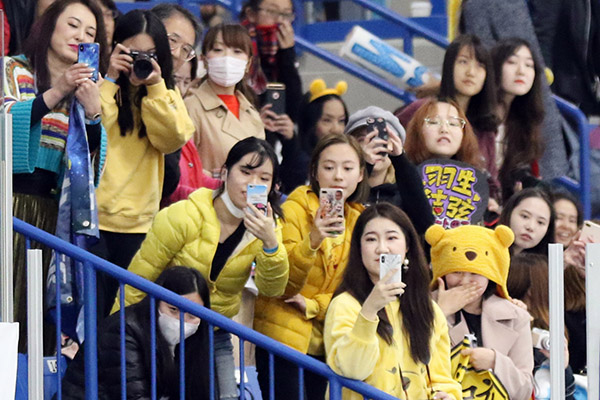 Then as quickly as they rose to cheer, dozens of fans, some even dressed in Winnie-the-Pooh outfits, ran out of the arena to lineup for optimal seats to see him the next day. Fans slept outside overnight to be first in line to get the best seats to see Hanyu the next day. Hanyu’s free skate the next day was not as clean as his previous performance, but secured him the second highest score, and with his combined total, he was still able to earn the gold medal.

Other notable Japanese performances came from Wakaba Higuchi and Yura Matsuda of Japan, who finished fifth and ninth respectively in the ladies division.

A notable absence from the competition was Keegan Messing, Canada’s top figure skater and descendant of the first Japanese immigrant to Canada in 1877. Messing won the gold medal in the men’s event at the Nebelhorn Trophy figure skating competition in Germany a few days later, on Sept. 29. 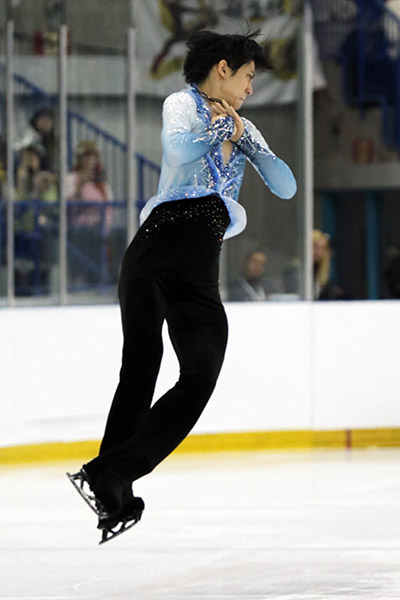 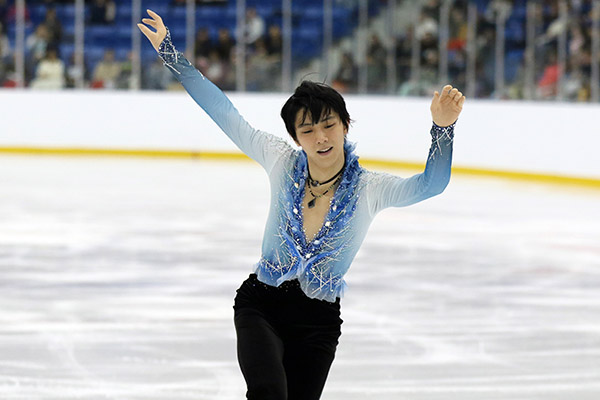 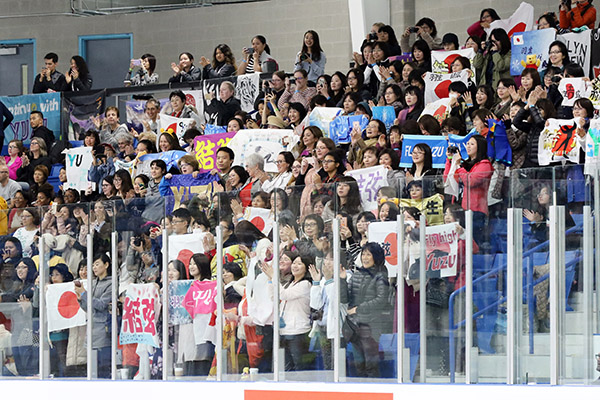 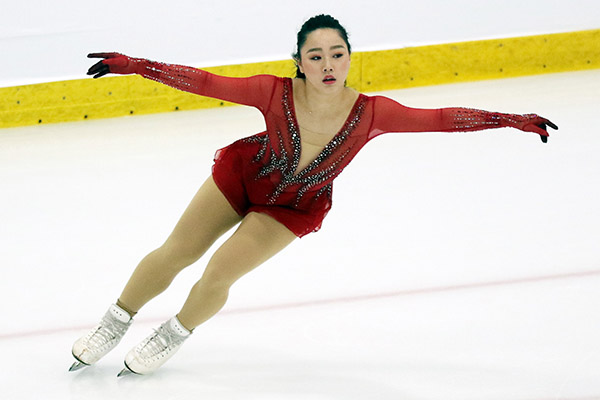 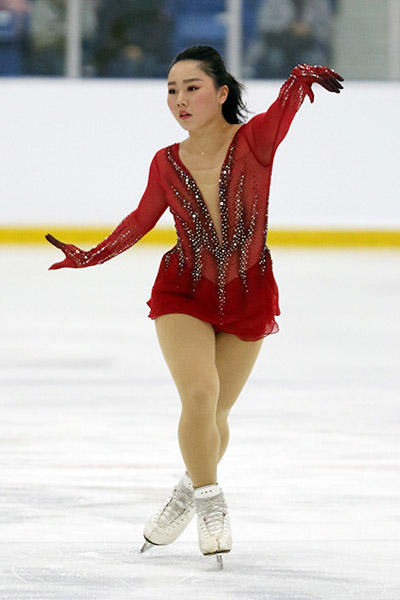 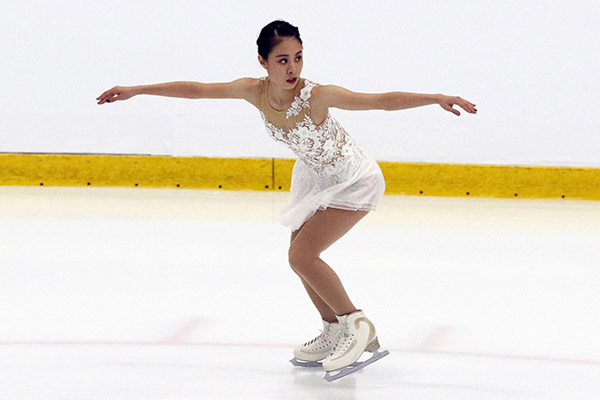 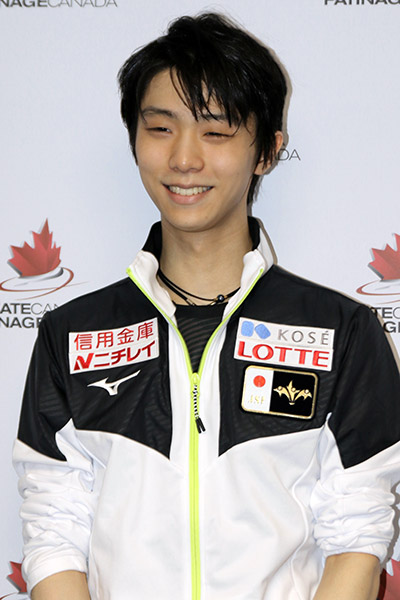 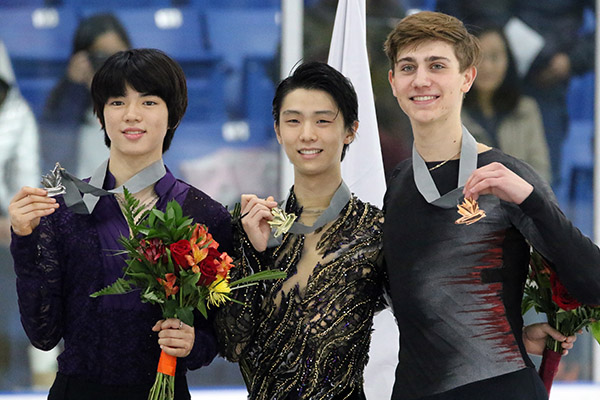 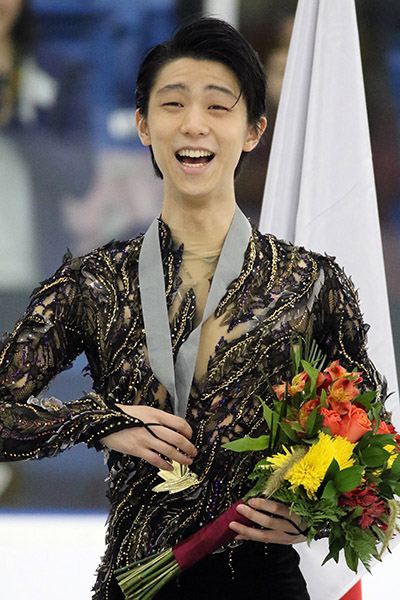