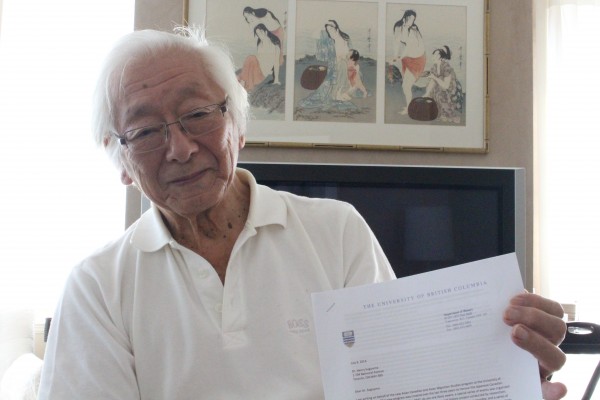 At the age of 88, Henry Sugiyama will finally be able to become a student at The University of British Columbia (UBC).

UBC has offered to pay for Sugiyama and a guest’s flight, while letting him stay at the university, where he will fulfil his official enrolment in the school’s new Asian Canadian Studies program as an honoured guest.

During his visit, he will be a registered student at UBC, where he was unable to receive the scholarship and acceptance that he earned 69 years ago.

“Imagine. I’ll be the oldest freshman in the world. At 88, I’ll be a freshman. I just hope I won’t get hazed,” he said jokingly with a smile on his face.

Sugiyama was born and raised along the Canadian West Coast in the same city that UBC resides in, Vancouver.

They had to choose between either being incarcerated at a Japanese internment camp or to go into exile voluntarily. They were forced to evacuate their home and move to Kamloops.

Just like that, his family had all of the possessions that they had worked their entire lives for taken away and sold. Not one of Sugiyama’s teachers at Templeton Middle School said goodbye to him and none of his friends came to the train station to see him off into exile.

“It was a very sad period of time for me,” Sugiyama said.

While the city of Kamloops refused to allow “enemy aliens” to live in the city, his family found refuge in rural Kamloops.

It was there that Sugiyama was able to attend Kamloops High School, where the principal, Mr. Gurney accepted him.

“In that way, I was very lucky. Unlike those that went to relocation camps, their schooling stopped. I was able continue,” he said.

During his final year at Kamloops High School he was encouraged by his teachers to apply for an entrance scholarship at UBC.

At the time, in 1945, the war was still on and under Canadian law, Japanese-Canadians weren’t allowed within 100 miles of the coast.

“I had no idea what to expect, but I knew that I enjoyed a challenge. This is what prompted me to write for a scholarship back in 1945.”

After his classmate, Dorothy Robertson won, but instead accepted a better scholarship to McGill University; it was Sugiyama who came in second place and was next in line to take the scholarship.

By September, the war was over, but still Sugiyama wasn’t allowed to attend UBC, as all Japanese-Canadians living in British Columbia after the war were forced to relocate east of the Rocky Mountains and were not allowed to move back until 1949.

“After all the racism and discrimination that we suffered up to that point, philosophically you figure ah what the heck, this is just another act of racism. So I didn’t think much more of it than that,” he said.

Being refused even after the war, Sugiyama applied to other Canadian universities hoping to get an education.

He applied to The University of Alberta, but wasn’t accepted, with their justification being that they didn’t accept students out of province.

“I would have thought they would have given some leeway, but they flatly refused,” he said.

He was finally accepted into The University of Manitoba.

“In spite of universities that were crowded with returning veterans, they accepted me, which was a very courageous act, I thought,” Sugiyama said.

It was at The University of Manitoba where he decided to take on a new challenge.

He set his sights on trying to get into medical school.

“There were going to be 500 students applying for 80 seats in the medical college and I said wow! That seems like a challenge. I thought I’d go into medicine on that basis,” he said.

He spent eight years studying medicine at the University of Manitoba where he eventually became a physician.

“I take pride in the fact that I was able to do this, become a physician and be a contributing member to society, I think that’s something my parents and grandparents would be very proud of.”

Now, with help from Mary Kitagawa— who also helped Japanese-Canadian students who had their study disrupted at UBC during the time of the evacuation get honorary degrees— he will finally be able to attend UBC.

On July 9, 2014, Sugiyama received a letter from Henry Yu, a professor at UBC, who invited him to attend one of his classes as a registered student and as an honorary guest, with UBC paying for his flight and his stay.

“I think we are making progress and it’s nice to see this sort of thing going on,” Sugiyama said.

His wife of 63 years, Joanne said, “I think they’re trying to undo and make amends, it’s a nice gesture. Seventy odd years later, but it’s better than nothing.”

“You can’t live your life bitter,” she said.

Sugiyama and his daughter, Constance, will be attending the opening ceremony of UBC’s new program in Vancouver this fall.

As Sugiyama said, “This completes the story.”