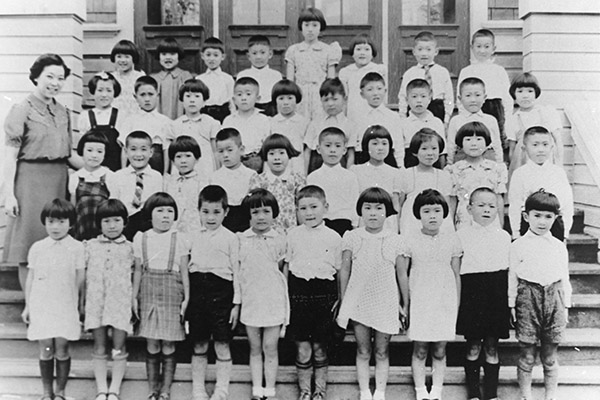 <a href="https://www.thecanadianencyclopedia.ca/en/article/hide-hyodo-shimizu" target="_blank" rel="noopener noreferrer">Hide Hyodo Shimizu, the teacher in the photograph above, was born in Vancouver in 1908. The eldest of eight children, her parents, Hideichi and Toshi Hyodo immigrated to Canada from Ehime-ken, Uwajima.

Hide completed her high school education in South Vancouver. She went on to pursue a degree at the University of British Columbia, when the campus was located around the Fairview neighbourhood. At the time, tuition was affordable and the commute was short. However, during Hide’s second year of study, UBC moved their campus west, to their current Point Grey campus, and more than doubled their tuition fees.

Cognizant of the financial burden she was putting on her family and wary that her siblings were also pursuing secondary and post-secondary educations, Hide withdrew from her program and began looking for work to support her family. By a stroke of luck while searching for secretary work, Hide discovered the Teacher’s Training School,  located near UBC’s old campus at Fairview. Hide enrolled in the school and was able to obtain a post-secondary education at an affordable tuition rate.

In 1926, at the age of 18, Hide received her teaching certificate. At the time, underlying racism made it difficult for Japanese Canadians to find employment in many trades, teaching being one of them. Despite her teaching degree and qualifications, Hide was unable to find work as a teacher in B.C. because schools simply did not want to hire Japanese Canadians.

But she persisted. Eventually, Hide found a position with the Lord Byng Elementary School in Steveston teaching kindergarten to Japanese Canadian children. She was given the position because the students spoke Japanese. However, Hide only spoke English. Classes were undoubtedly a struggle and Hide found herself frustrated with the limitations of the school curriculum, as well as her lack of experience in communicating with the children.

After three years of teaching kindergarten and Grade 1, Hide thought of resigning. During this time, Hide found an ad in the newspaper for a teacher-training summer school focused on teaching English. She jumped at the chance and immediately signed up. The experience would completely change Hide’s outlook on teaching, boosting her confidence immensely and giving Hide a newfound passion for teaching. She never thought of giving up again.

In December of 1941, Japan bombed Pearl Harbor, setting off a chain reaction and leading to the Canadian government calling for all Japanese Canadians to be relocated to the interior of B.C. During this time, Hide continued to work as a teacher at Lord Byng Elementary School to the best of her abilities.

When she and her family were sent to Hastings Park, Hide continued to prepare daily lessons for her students, taking the tram from Hastings Park down to Steveston in the morning, and back in the evening in time for the 9 p.m. curfew.

She did this  while setting up another school at Hastings Park for the children who were being brought there. Her classroom at Lord Byng began to dwindle as her students, most of whom were Japanese Canadian children, were slowly sent to Hastings Park and then to the interior of B.C. with their families. In June of 1942, Hide made the decision to leave her position at Lord Byng in order to teach at the school in Hastings Park.

Under Section 93 of the British North America Act, education was a provincial responsibility that lay with the B.C. Government and the Department of Education. The B.C. Securities Commission had also stated that students, despite their “evacuee” status, were simply being moved to the interior of B.C. and the government was still responsible for providing suitable education for them. Working with the Securities Commission, Hide Hyodo supervised a staff of volunteer Nisei teachers comprised of university and high school graduates. She was assisted by Teruko Hidaka, the only other woman besides Hide to obtain a teaching certificate.

Together they trained over 50 young Nisei volunteers, nearly all girls, to teach the students of Hastings Park in various grades and capacities. However, their efforts were severely complicated in the summer of 1943, when the B.C. Government announced its decision to relieve itself of all responsibilities associated with the education of Japanese Canadian children.

For the next three years, until 1945, Hide assisted the B.C. Securities Commission in all manners of education and teacher-training, making every effort to ensure an education for all 2,348 children enrolled.

With Teruko Hidaka, Hide set up week-long teacher-training seminars for Nisei volunteers. Students from UBC, and staff members at the teacher-training schools in Vancouver came to the camps to lend a hand when they heard of the provincial legislature’s decision to renege its responsibilities. Through their combined efforts, schools were set up in all seven internment camps in B.C. and suitable a curriculum was established.

On June 21, 1982, Hide Hyodo Shimizu was appointed to the Order of Canada for the critical role she played in ensuring the education of Japanese Canadian children in British Columbia.


2018 the City of Vancouver renamed the Commercial Drive Bridge, after Hide.In 2019 a plaque will be installed on the bridge naming it the Hide Hyodo Shimizu bridge.