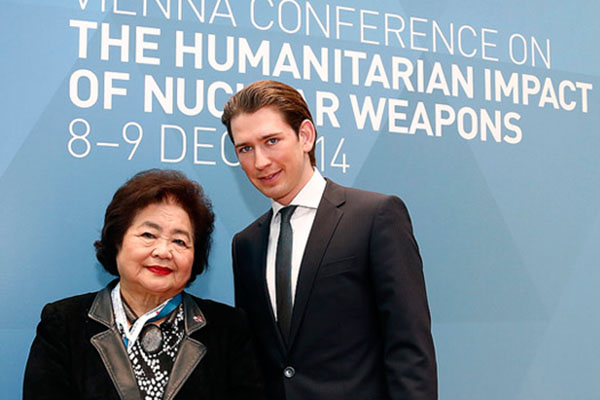 Setsuko Thurlow, a Hiroshima atomic bomb survivor and Hiroshima Peace ambassador received the Ahmadiyya Muslim Prize for peace in March. Photo: Setsuko Thurlow with the Austrian Foreign Minister at the 2014 Vienna Conference for the Humanitarian Impact of Nuclear Weapons.

LONDON — Hiroshima atomic bomb survivor Setsuko Thurlow was honoured with the Ahmadiyya Muslim Prize for the Advancement of Peace in London, England, on March 25.

The Ahmadiyya community, established in 206 countries, spearheads international efforts to promote global peace and respect and human rights for all.

Thurlow was cited for a lifetime of service to her community as a social worker, helping fellow immigrants in Toronto and as a disarmament educator and global advocate for the prevention of nuclear war.

Accepting the peace award in one of the largest mosques in Western Europe, Thurlow stated, “This recognition and prize signifies your support and encouragement for the decades long efforts of millions of people around the world who desire nothing less than the prohibition and elimination of nuclear weapons to ensure real human security to the people of the world.”

Through her decades-long advocacy, Thurlow became a major voice in the global effort to establish a UN convention that would outlaw the manufacturing and possession of nuclear weapons.

As a hibakusha (Japanese for atomic bomb survivor), she spoke at international conferences in Geneva, Mexico and Austria about the humanitarian impact of nuclear weapons that led to the current UN ‘Ban the Bomb’ negotiations in New York.

Ms. Thurlow addressed an audience of 10,000 at an International Conference Against Atomic and Hydrogen Bombs in Hiroshima and has also spoken in Norway, Sweden, Austria, Germany, Ireland, Scotland, England and in Washington, D.C. and other U.S. cities.

Ms. Thurlow will address members of parliament, followed by a press conference, in Ottawa at the beginning of June and then travel to New York for the final vote on the UN agreement to ban nuclear weapons in July.

NHK in Japan is producing a 50-minute documentary on Thurlow’s peace work. She was appointed a Hiroshima Peace Ambassador in 2015.

Accepting the Ahmadiyya Peace Award, Thurlow declared, “As one who experienced the catastrophic and indiscriminate atomic bombing of Hiroshima as a child, and who has been speaking out against such inhumane, immoral and cruel atomic bombings for the past 72 years, I rejoice that at long last the world is making significant progress to establish a legally binding treaty for the prohibition of nuclear weapons.”

Much to Ms. Thurlow’s dismay, Canada regrettably is not participating in the UN ban the bomb negotiations because of pressure from the U.S. and other NATO allies. Along with her late husband Jim, Ms. Thurlow was one of the founders of the Hiroshima Nagasaki Relived Peace Education group, founded in Toronto in 1975.

An active member of its successor organization, the Hiroshima Nagasaki Day Coalition, Ms. Thurlow will read this year’s Hiroshima Peace Declaration at the annual Hiroshima and Nagasaki commemoration at the Toronto City Hall Peace Garden on August 6.

Further information on the commemoration can be found on the HNDC website: www.hiroshimadaycoalition.ca

Click below to watch Setsuko Thurlow receive the Ahmaddiyya Muslim Prize for the Advancement of Peace in London:


Good article about an amazing person and a faith organization bringing hope for a peaceful world..