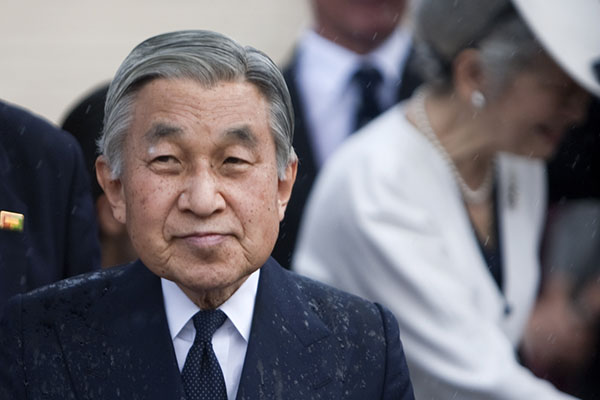 The bill was passed by the Japanese government on May 26, and was widely expected to pass. The bill states that when the emperor abdicates, he will be succeeded by his eldest son, Crown Prince Naruhito.

Chief Cabinet Secretary Yoshihide Suga told reporters on May 26, that the government “hopes for the smooth passage of the legislation.”

Before today, the Japanese constitution did not have any provisions for abdication. This current bill is only a one-off, which only Emperor Akihito will be able to use to abdicate. Crown Prince Naruhito and his successors will not be able to abdicate under the same law.

Last August, the emperor made a rare statement to the public, expressing his wish to abdicate. He shared how his age and health have made it difficult to complete his official duties as emperor.

In Japan’s constitution, the emperor is not permitted to comment on politics, so he could not explicitly state his wish to abdicate in his speech.

The 83 year-old emperor has had heart surgery and prostate cancer in the last 15 years. He is a widely loved figure by the Japanese public since he succeed his father, Hirohito, in 1989.

A poll conducted by Kyodo News last summer found that 85 per cent of Japanese people supported the emperor’s wish to step down.

When the emperor abdicates, he will be the first emperor in Japan to do so in 200 years. The last emperor to abdicate the thrown was Emperor Kokaku in 1817. Before 1866, emperors were allowed to retire. During the Meiji Restoration in 1866, the throne was moved from Kyoto to Tokyo, and the emperor was declared a god-emperor who served for life. As well, women were longer allowed to ascend to the throne.

In 1947, Japan under American occupation changed the constitution again. The emperor was no longer a god-emperor and had no political power, but would still serve for life. Any royal woman who married a commoner would have to leave the imperial household. These are the rules that still run the imperial household today.

Another development in the imperial household recently has shone a light on these rules. Princess Mako, the eldest grandchild, announced her engagement to Kei Komuro, a paralegal and graduate student, and former classmate of the princess.

When the princess marries, she will have to leave the royal household, renounce her title and will not succeed the throne. As well, eventually Princess Kako and Princess Aiko will have to do the same. Since women cannot ascend the throne, the only heir left is Akihito’s youngest grandchild, 10 year-old Prince Hisahito, to carry on the 2,500 imperial line.

Japan has not had an imperial abdication in two centuries and there was no law to deal with Emperor Akihito's surprise retirement request pic.twitter.com/DVjhGNO83R

The Japanese government will set Emperor Akihito’s abdication date, which is expected to be December 2018.

Watch below Emperor Akihito’s address to the Japanese public this last summer, carefully expressing his wish to step down:


Is it in Japan, where are there explanations about dynasties and work procedures for tourists?