INTERROGATION: Lives and Trials of the Kamloops Kid playing at the JCCC 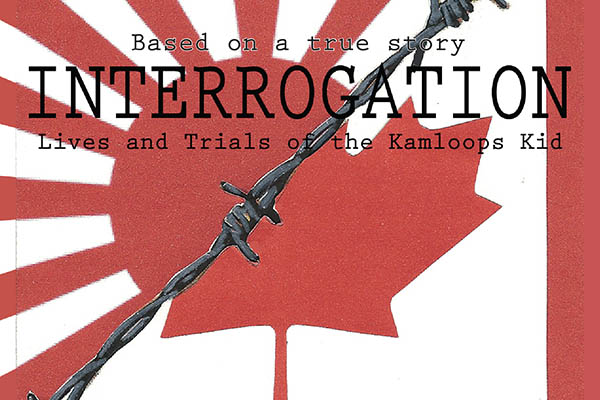 After its premiere at the Toronto Fringe Festival, INTERROGATION: Lives and Trials of the Kamloops Kid will receive two encore performances at the Japanese Canadian Cultural Centre on Wednesday, November 18. Nikkei Voice is the proud media sponsor for the event and present the following Q&A with its creators.

Nikkei Voice: How was Interrogation received during its first run?

Evan Mackay: Audience members who have spoken to us have been appreciative of the perspective we brought, but there is much room for discussion and debate about many sensitive issues this material explores. Hopefully people will not hesitate to come forward and tell us what they think. It likely would help us to make the piece even better for future productions.

NV: Did invoking the Kamloops Kid stir any discussion and debate?

EM: Not like I expected. When CBC Kamloops broadcast our radio interview they followed it, appropriately, with a clip of an interview with a Canadian Hong Kong veteran who remembered, grimly, seeing the Kamloops Kid in action.

NV: Since Fringe, how has Interrogation changed as a play?

EM: Apart from modifying just a few words of dialogue to make it more appropriate to the period, the only change is that we won’t need to squeeze it into a 60 minute time block like we had to for fringe. So we have the freedom to ease up on the pace in some parts and let the ideas and implications sink in. This should make it a better experience for the audience and the cast.

NV: Some say that family is the harshest critics how did they react?

Karri Yano: Ninety-nine percent of my family have been supportive (and a few have even been part of the production); there was one member who phoned me up at work and said my Grandmother had been very upset by the internment and her brother’s execution and would have preferred the matter to be forgotten. It’s an upsetting topic, but it’s important part of our past and part of Canadian history.

INTERROGATION: The Lives and Trials of the Kamloops Kid is set to play on November 18 at 1 p.m. and 7 p.m. at the Japanese Canadian Cultural Centre. Nikkei Voice is the proud media sponsor for the show.