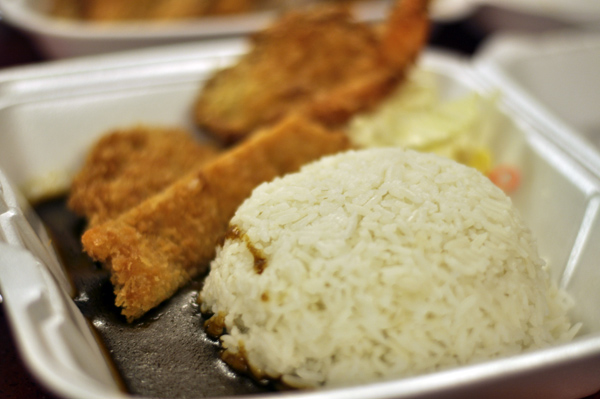 Deep inside of the Aura condo near Dundas and Yonge lays a hidden gem.

Descending down the stairs and into a sparsely populated food court, Kaiju’s red and white sign makes an immediate impression and so too does owner Siak Khoon Chen.

The take-out restaurant has a great variety of Japanese and Malaysian food, but the main attraction is its Japanese curry. Offering different levels of spiciness, from Mild to Kaiju, I went with my better judgment and decided to start out slow.

Chen asked us – I was with a friend – to find a seat somewhere in the food court and he would bring the food out to us. What he brought were three huge containers, two filled with rice, curry, and coleslaw, and the other filled with a variety of deep fried fish, shrimp, and pork (Kaiju Jumbo Combo for two $18.00). 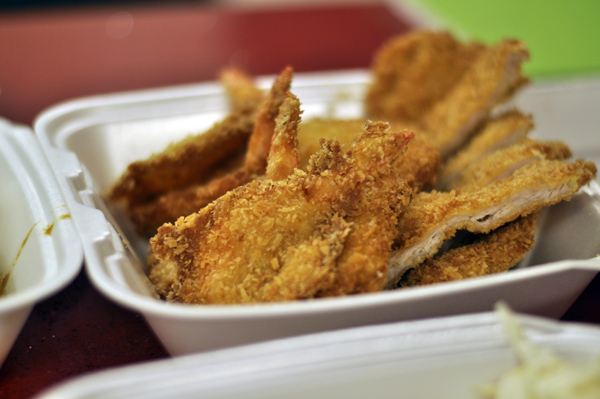 Look at this monster-sized box of katsu.

The cuts of deep fried fish, chicken, and pork were as large as any other Japanese restaurant that has katsu curry on offer. The fish was moist and flaky, the pork was savoury and crunchy, and the shrimp was fried to perfection. There’s a huge selection of meals available ranging from $6-$10, but for two people the jumbo combo might prove to be too much.

While deep-fried, the katsu given to us was lightly-breaded and not drenched in oil. Usually, I prefer the latter to the former, but after a long winter the last thing anyone wants to eat is an oil-drenched piece of katsu.

However, what struck me as entirely different was the taste of the curry itself.

Cooked for over two days at a low temperature, according to a review in the Torontoist, this curry has spice and nuance. 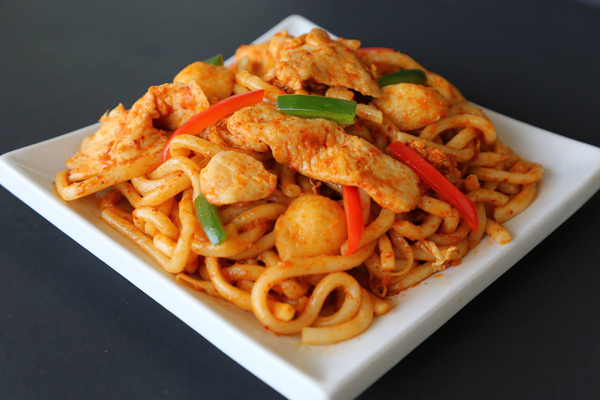 Kaiju also has a large selection of Pan-Asian food.

Most Japanese curry Canadians are used to having come inside of pouches or are cooked from cubes. What Kaiju offers is a new take on curry that’s a little thinner and a little spicier than almost anything else you can have in the city.

However, it’s unmistakably Japanese with the same variety and tastes found at any small, locally-owned curry huts you can find in Japan.

Restaurants in Japan like CoCo Curry offer restaurant goers the ability to select their spice level, and the further up you go the closer the curry gets to the real taste experience.

Kaiju’s curry starts off tasting more like real curry than what most who eat varieties like Glico or S&B Golden Curry. Pre-made curry can even be a little sweet, but this restaurant in Toronto’s downtown cores offers something rarely found in the city.

As well, the restaurant’s location is much easier to reach for people close to the downtown core or for anyone along a subway line. It’s certainly worth checking out and I can’t wait to go back to try out the Kaiju-level spicy curry.