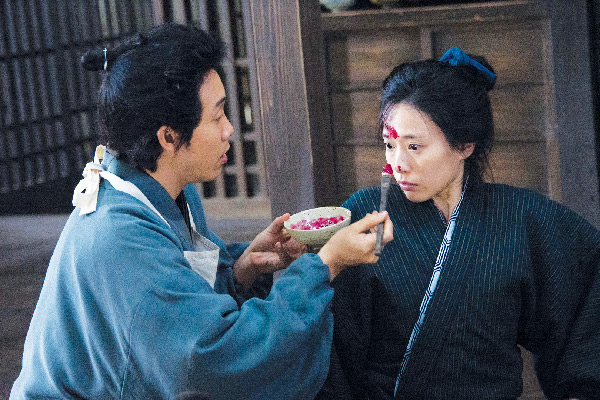 Yo Oizumi, left, and Erika Toda, right, star in this film about a doctor who helps divorced women in Japan start life anew. Photo courtesy: JCCC

Prolific and award-winning director Masato Harada (Chronicle of My Mother, Kamikaze Taxi, Climber’s High) is probably most recognizable to Western audiences for his performance as the sinister, moustachioed villain Mr. Omura in Tom Cruise’s The Last Samurai.

2015 has been a busy year for the director; he releases his war drama The Emperor in August this summer while the light-hearted historical drama Kakekomi is released in May.

The film could as easily be titled “Divorce – Samurai Style” and deftly mixes romance, action and intrigue with historical fact.

In old Edo, women seeking divorce or escaping bad marriages would flee to Tokeiji Temple in Kamakura. Once through the temple gates they became “kakekomi” and would spend two years pursuing a monastic existence. In the meantime, the wise divorce arbitrator Genbei (Kiki Kirin) makes preparations for them to restart their lives. Her new intake of kakekomi includes the beautiful but tragic concubine O-Gin (Hikari Mitsushima), expert iron-worker Jogo (Erika Toda), and the vengeful female samurai Yu (Rina Uchiyama).

At the same time Genbei’s nephew Shinjiro, a novice doctor and aspiring novelist, returns home to find he must struggle to balance his duty to help save these women with his own hopelessly romantic impulses. For all the order and tranquility within the temple, Tokeiji finds itself under constant siege, defending itself from disapproving local magistrates, yakuza gangsters and the many jilted husbands and lovers.

Among these are the wealthy merchant Horikiri (Shinichi Tsutsumi) who is O-Gin’s lover, Jogo’s worthless but repentant husband and the drunken swordsman who killed Yu’s father and forced her into marriage.

The great Tsutomu Yamazaki is also on hand casting a wry and benevolent eye on the proceedings as the famous Edo writer Bakin Kyokutei.

Kakekomi is a rousing entertainment built around the constant push-pull between Oizumi’s charming, oddly handsome and verbally dexterous Shinjiro and the emotionally scarred beauty and determination of Toda’s Jogo.

Based on the acclaimed novel by Yasushi Inoue, the film is packed with story, incident and action. So much in fact, that Harada found himself having to edit the film down from four hours to its final two hour 25 minute length. The effort shows and the film can at times be challenging to follow as it bounces between the multiple subplots and characters.

Kakekomi makes its international premiere with Harada-san in attendance as the opening night feature at this year’s Toronto Japanese Film Festival on Thursday, June 11.