The Musical Life Together 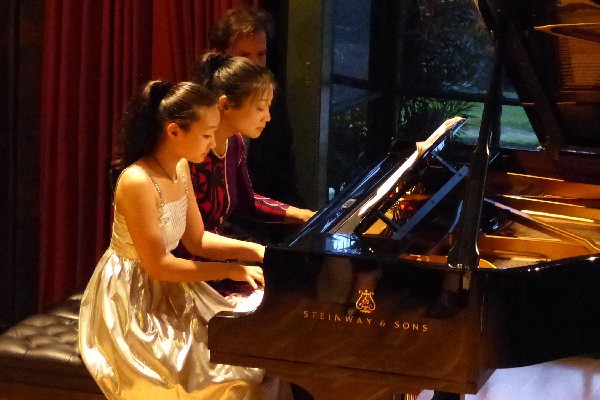 
Karin Kei Nagano, left, and Mari Kodama, right, say playing together on stage felt only natural after living a life of music together. Photos by: Vincent Garnier

Pianists Mari Kodama and Karin Kei Nagano feel at home performing together. During their first international tour, the duet played in Paris, Mont Tremblant, and Niagara-on-the-Lake. It was a wonderful experience for the mother and daughter as they worked to master the push and pull of their performance on stage.

And in April this year, the two will be playing at Bravo Niagara! Festival of the Arts on their second tour. Inside the intimate venue at the Stratus Vineyard.

It’s experiences like these, they say, that have helped deepen their musical connection.

Kodama was born in Osaka, Japan and studied piano at the Conservatoire National de Paris. She’s an internationally renowned performer and her daughter is following in her footsteps.

Being surrounded by music her entire life, Nagano, 16, was bound to have a natural flair on the piano, but every musician needs a teacher. And she found her first mentor in her grandmother and her teachings.

“My grandmother was a piano teacher,” Nagano said in an interview with Nikkei Voice.

“She taught me the basics of how to play on a keyboard and it was quite inspiring, and since we were family it was also quite a nice connection,” she said.

Another musical connection was her father, Kent Nagano, who is currently the music director of the Orchestre Symphonique de Montreal and also works with the Bavarian State Opera.

“I just grew up in this environment and it seemed normal for me to follow the path of my parents and my grandparents,” Nagano said.

She also spent time in various opera houses and concert halls being surrounded by musicians within the industry giving her worldly experience few other young pianists could say they’ve had in their initial years.

These achievements are only amplified by the many international tours she’s had across Europe and Canada, but for Nagano the key to success comes from understanding the music’s cultural background.

“It’s extremely important to follow the composer’s style and instructions, but that is just the basis of interpreting a piece,” Nagano says. “But another extremely important factor is to be involved in what we are playing and simply enjoying the music.”

She believes that really savouring the various pieces you take on is an important part of a performance that brings an audience into the experience, and her mother agrees.

“One of the most important parts is to learn the language of the repertoire,” Kodama says. “German, French, Russian, Austrian… you really have to know the language of those people and music. In addition, you have to develop your own personality, which is very important.”

And for Nagano, her parents have given her the chance to study abroad and work closely with some of the great European piano masters like Germaine Mounier, Igor Lazko, Vadim Suhanov, Colette Zerah, and Alexander Paley.

Collectively, it’s experience and emotion that makes a pianist great, the two agree, and for the duet there’s nothing that inspires them more than their family connection. Of course, it can be a bit nerve wracking playing with one of your mentors up on stage.

“I have a little more experience than my daughter,” Kodama says.

“In some sense it is quite a lot of pressure because my mother is there to judge me,” Nagano jokes.

“I was going to say, I wasn’t sure it was a pleasure,” Kodoma laughed.

“It is also extremely fun to duet with her because it’s so comfortable and I’m extremely free to express myself,” Nagano says.

And it’s this push and pull of the mother and daughter performing together that makes their performance such an intimate and fun experience for audiences.

After Bravo Niagara!, Mari Kodama will be going back to Japan for a short while and Karin Kei Nagano will be returning to school after Spring Break to complete her finals and SATs.

After that she will be taking on more concerts in the States, Japan, and Europe. She will also undertake a recording project. It’s an exciting time for the young pianist who is forging her own path as a musician inspired by a life filled with music.