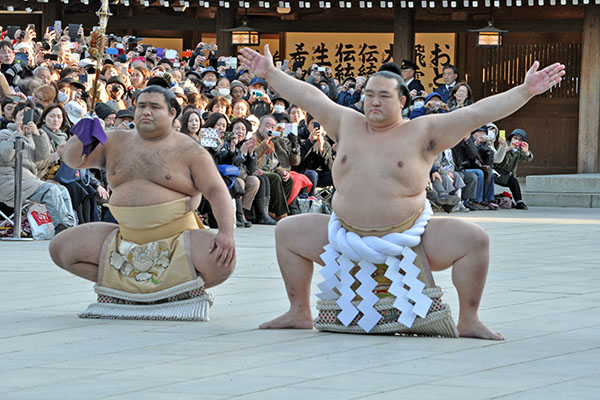 Kisenosato (right) performs his first duty as yokozuna, a ring entry at the Meiji Shrine, to a crowd of 18,000 people on Jan. 27. Photo courtesy: Wikimedia Commons.

The 30 year-old Yutaka Hagiwara, whose sumo name is Kisenosato, has created a buzz in Japan after winning the Emperor’s Cup in the New Year Grand Sumo Tournament on Jan. 22. During the 15 day tournament, Kisenosato made headlines after winning 14 matches and losing just one.

Three days after the tournament, the governing body of sumo wrestling, the Japan Sumo Association (JSA), unanimously voted to promote Kisenosato as the 72nd yokozuna.

“I would like to respectfully accept it. I will devote myself to not disgrace the name of yokozuna,” Kisenosato told a group of reporters after receiving the promotion.

While sumo wrestling is Japan’s national sport, it has been dominated by sumo champions born outside of Japan. There has not been a Japan-born yokozuna since Wakanohana, who came from a famous family of sumo, and was trained by his retired sumo father, Takanohana I (his brother also went by the name Takanohana while wrestling, while Wakanohana took his uncle’s sumo name).

Kisenosato joins the current yokozunas, Hakuho, Harumafuji and Kakuryu, who are all born in Mongolia.

Many foreign-born sumo become Japanese citizens, because a Japanese citizenship is required by the JSA for retired sumos to become trainers, or toshiyori, and have a stable of sumo to train.

In Japan’s ancient and national sport, sumo ascend and descend through a ranking hierarchy, known as banzuke. Losses can also get sumos demoted. The highest and most prestigious rank is yokozuna, which must be approved by the JSA. Unlike other rankings, yokozunas cannot be demoted from their rank, but are expected to retire once they start losing more matches than they win.

The yokozuna rank is the pinnacle of the sport, and represents its greatest athletes, who in part of their role are expected to promote and represent sumo wrestling. Scandal has followed the yokozuna over the last few years, with allegations of fraud, drug use and assault within the group. Asashoryu, a sumo considered the third best in the sport’s 2,000 year history was forced to retire following a drunken assault of another man in 2010.

“A yokozuna is considered to be the strongest man,” Kisenosato told reporters. “I will certainly be in the spotlight when I’m in the ring and my attitude will be under scrutiny when I’m not in the ring as well. So I would like to grow more as a human, so I will earn respect.”

Kisenosato performed his first duty as yokozuna, performing the ring entry at the Meiji Shrine on Jan. 27. A crowd of 18,000 people saw the athlete for the first time in his new ranking, including his parents.

“There has never been a week as full as this in the past 15 years,” Kisenosato told Japan Times after the ceremony. “I won’t forget it the rest of my life.”

Watch below as Kisenosato wins his final match on Day 15 of the New Year Grand Sumo Tournament: