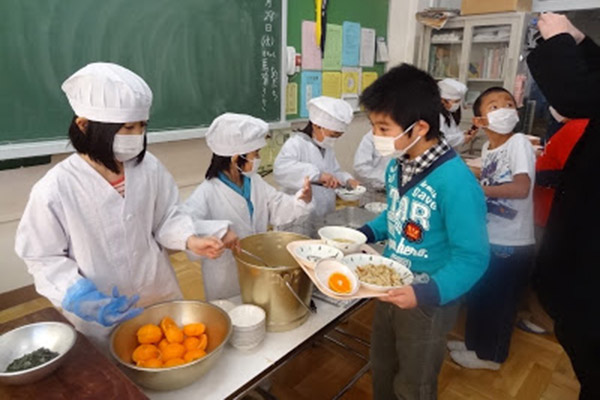 
Healthy food practices are taught in Japan at a young age. School children take turns serving each other lunch in Japan.

I realized this may not always be the case. It’s like when someone asks me about Japan after being away for a year. What can you say without sitting down with them for a few hours? Instead, I give an elevator pitch. It was great, I learned a lot, I loved Shikoku island. I know this is not enough for me, but the other person is satisfied. It is hard to sum up what you love and why.

That’s what happened when I spoke about my time in Japan during the Virtual Communal Table I hosted on Zoom for World Food Day on Oct. 16. Before the event, guests picked up or were delivered a Japanese-inspired five-course meal.

The table was set for me to speak, but I was hesitant about what to say about food and Japan. Why? First, for me, food is more than food. It is about nourishment, beauty, excitement, adventure, learning, and much more. Most of all, it’s about love.

Living in Japan, I realized that my approach to food was not as unique as I thought. It’s part of the Japanese culture and people. Food for the Japanese is not just something you must do along the way to something else. It is the journey and the destination, an important part of daily life.

Before Japanese people begin their meals, they bow slightly, with palms together and eyes closed, and say, itadakimasu. This means, “I will humbly eat this food served to me.” It is about respect, sincerity, and gratitude for all that went into the meal. From everything it took for the food to be grown, harvested, prepared, and brought to you.

Following a meal, saying gochisousama is a way to express that you are done eating and enjoyed the food. It is also a way to further show appreciation toward the feast and everything it took to create it.

Healthy food practices are taught in Japan at a young age. School children take turns serving each other lunch in Japan.

Respect for food is taught at a young age. In the elementary and junior high schools where I worked as an assistant language teacher with the Japan Exchange and Teaching Program (JET), school lunches, called kyuushoku, are more than just a meal.

The lunches are planned by the school nutritionist and cooked onsite in a commercial kitchen by paid staff. There are no cafeterias, and instead, students eat lunch together in their homeroom classroom. The schools have a highly efficient operation for serving lunch. Each class receives a big trolley from the kitchen, stacked with large metal bins of food, along with dishes, cutlery, and glass jars of milk.

During the lunch period, the classroom turns into a mini cafeteria with long tables. Some of the students are designated as the chefs for the day. They wear special outfits of cloth gowns, masks, and chef hats to serve their peers. It’s hard for us to imagine six-year-old children serving each other. Still, they do it in Japan with incredible focus and care, that I watched in amazement. The homeroom teacher reminds the students to take only the portion they want to eat, and they must eat everything they take.

After they finish, each student is responsible for clearing their tray, putting everything back in a neat pile of dishes, cutlery, and trays. They scrape their dishes, throw away the trash, and wash out their milk bottles, so everything is in orderly and clean piles as they came in. They clean their desks with a damp cloth and then grab their toothbrushes with their names on it in an assigned covered holder and brush their teeth. And all this, they do on their own without prompting, which fascinated me to no end.

Japan’s school lunch system began in 1889 in Tsuruoka, Yamagata prefecture. An elementary school began serving lunch to students who couldn’t afford to bring lunch. Schools across the nation began to follow suit. School lunches in Japan are taken very seriously, like a course in the educational curriculum. It teaches students etiquette, serving and cleaning skills, healthy food choices, and lifelong eating habits, and introduces them to a variety of food. Most importantly, the lunch system creates a bond between schoolmates in sharing a meal.

For the school office staff and teachers, lunch is served by the assistant in a separate room from the office. She lets the staff know when the trays of food are ready. Even with the announcement, they do not rush in to eat. There is a slow meandering to sit at the table, and often staff encourage each other to go first.

Was anyone hungry? I’m sure they were, but in Japan, it’s always “you before me,” which makes it awkward to be the first to begin without a little embarrassment or guilt. Some teachers supervise the student lunch service in classrooms and eat with them. Sometimes I ate with the students at the elementary school. I learned so much about Japanese culture and how children are taught mindfulness at an early age. It was a year of observation, where I began reflecting on my thoughts and actions. 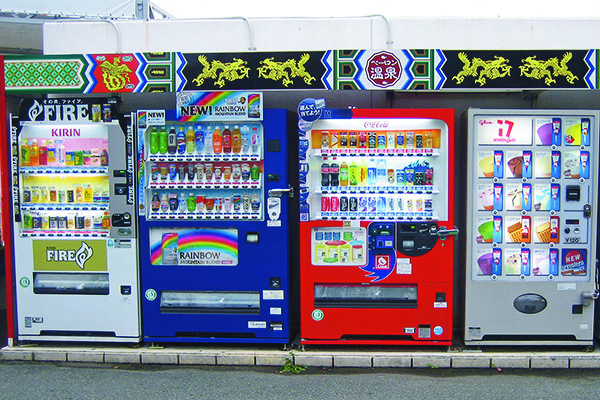 I may look Japanese on the outside. However, the more I lived in my town, the more I realized how Canadian I was. Town residents would always treat me as a foreigner, which reinforced this. However, at the same time, I was expected to follow Japanese traditions and school rules that were often unspoken. I would often find out about them if I crossed any invisible lines.

My colleague or boss would whisper words to me in Japanese about what I did wrong. Their words would seem kind enough initially because the tone was soft and gentle. However, as I heard the words, a knot would form in my stomach. I could feel the sting of their words intended to discipline and ensure I stay in line with the others. I felt like a scolded child and guilty about something that I hadn’t even known about.

Rules about food and eating and just about everything in Japanese life encouraged me to be more mindful of my actions. At times, this was challenging, being a Canadian girl at heart and wanting to be the feisty, independent, and free spirit I am. It was a fine balance. I found out over time that it’s not just me. When speaking to my Japanese friends, they said sometimes it can be a burden to always act in the right way at the right time, especially for women, when if you don’t, you are frowned upon and shunned.

That’s why I heard vending machines, called jidohanbaiki, became extremely popular in Japan. They sell everything from hot meals, sake, and cold beer to cigarettes, costumes, and hilarious festive headgear for your cat. Instead of entering a store and going through the exchange and formalities that are part of the culture, you can pay and get what you need quickly and privately. 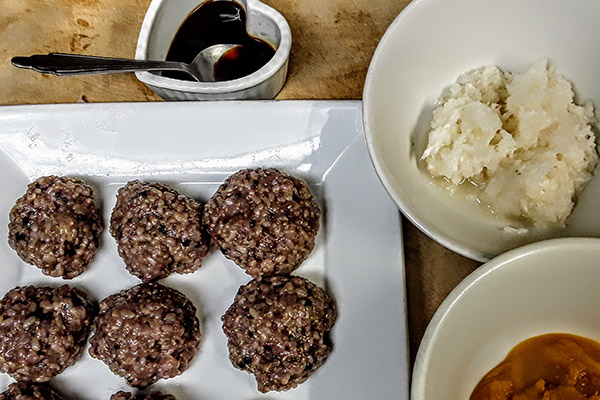 The god in your onigiri

Part of Japanese culture and tradition is making a conscious effort to be mindful of food. Food, like most things in Japanese life, is spiritual. Some believe there is a god in everything, including food. So, if there is a god in food, might we treat it more carefully?

It’s about being mindful of what you eat, how much you eat, and how you eat it. I never witnessed any quick, messy, or haphazard eating. It was all about intention and focus on whatever you are doing, including eating. That’s why it’s frowned upon to eat or drink while you are moving. It’s disrespectful to the food. You wouldn’t want to offend your onigiri, would you?

Often you see people at vending machines drinking what they just purchased or standing at counters to eat their ramen or tempura. You seldom see people walking while eating and drinking. 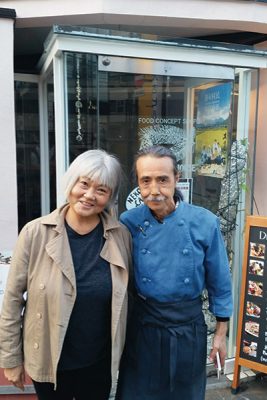 I hate wasting food. I learned this growing up, putting even the smallest portions of leftovers in the fridge for later. In coming to Japan, I learned that not wasting is part of the Japanese approach to food and life. The word mottainai refers to both physical waste and wasteful action.

When I trained in Japanese cooking at a macrobiotic, organic restaurant called Mominoko in Tokyo, the chef would use all parts of the organic vegetables. Nothing was thrown out. He wasn’t afraid to show customers on their plates parts of vegetables often thrown away in traditional restaurants. In Chef Yamada-san’s cooking, you would see the ends and tops of carrots made into a pickle or added to a salad. If there were any discards, they were put into the miso soup. Each part was used, and the customers appreciated this. I thought this was smart, and why not? Who taught us that we should only use certain parts of any food?

In the supermarkets, prices are lowered in the evening, so almost all the food is gone by the time the store closes. Those who are looking for bargain food items for future meals come during this period. I couldn’t resist the meals, snacks, and sweets at reduced prices.

The Japanese use mottainai not only for food. It also refers to respecting the short time we have on this earth, and for me, this always includes good food shared with others.