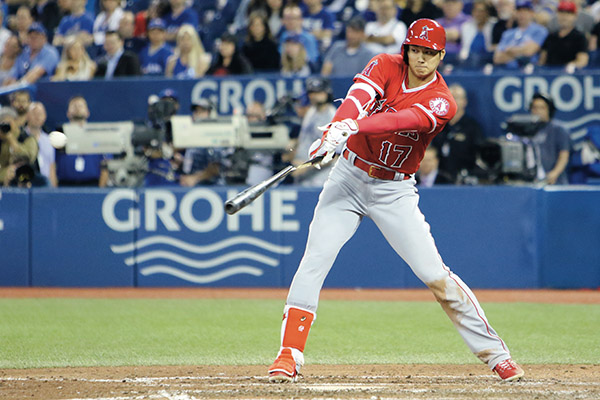 Shohei Ohtani’s first hit in Canada: Top of the 9th, with bases loaded and a broken bat single (you can see the shaft snap in this photo). Photo credit: Dr. Jonathan Eto.

TORONTO — With Major League Baseball’s favourite Japanese player, Ichiro Suzuki, in the twilight of his career, a new sun is on the rise.

After being courted by over two dozen MLB teams, two-way sensation Shohei Ohtani from Oshu, Japan, signed with the Los Angeles Angels to a minor league contract Dec. 9, 2017.

The 6’4”, 23-year-old, has become one of the most talked-about players in baseball this year. He has the potential to become the first starting pitcher and regular batter to play in the league in nearly 100 years. The last player to do so was Babe Ruth in 1919, in his last season with the Boston Red Sox. 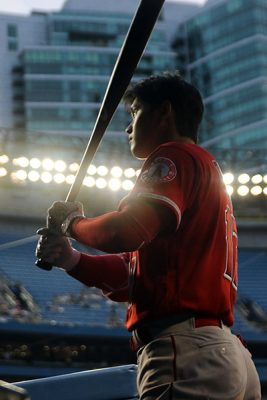 Ohtani in the Angels dugout on the May 23rd game.

Despite a slow spring season start, Ohtani silenced his critics with his first ten games in the majors. Opening Day, in Oakland, Calif. on March 29, his debut in the league, on the very first pitch he hit a single to right field. Three days later in his first start on the mound, he beat the Oakland Athletics 7-4, earning his first MLB win.

In the first inning of his Los Angeles debut, on April 3, with bases loaded, two out, he worked the count to 1-2 when a wild pitch scored a run and advanced the runners to second and third. Then, the crowd erupted as he hit his first MLB home run and finished the game 3-4 at the plate, with 2 runs scored.

The cameras kept rolling as Ohtani would go on to hit a home run in the next two consecutive games before facing the Oakland A’s again for his second pitching start. Even stronger than the first, Ohtani went 7 innings, retiring the first 19 batters he saw in succession. Finishing with 12 strikeouts, and allowing just one hit and one walk. Combined with his first start, Ohtani retired 27 Oakland batters in a row.

Unfortunately, since then Ohtani has already had a couple minor injuries which have hurt his performance. A blister on the middle finger of his pitching hand caused him to have an early exit on his third start the Boston Red Sox, and his first loss.

April 27 versus the NY Yankees, Ohtani hit a homerun in his first at bat. In his next plate appearance, while trying to leg out another broken bat hit, to avoid a collision with the first baseman, he hit the bag awkwardly and twisted his left ankle (the ankle that he lands on for pitching) leading to his second early exit.

Unlike most pitchers and designated hitters (DH) who are often the slowest baserunners, according to Statcast Sprint Speed Leaderboard, Ohtani’s average speed is 28.1 ft/s. (just under 31 km/h) which is the fastest speed for a DH this season. He is the second fastest on the Angels, trailing only Superstar CF Mike Trout with 29.3 ft/s.

In case that isn’t impressive enough, on April 24, 2018, Ohtani threw two pitches at 101.0 mph which is the fastest by any starting pitcher this season.

With a scene change, Shohei continued his quest for excellence in Canada, facing the Toronto Blue Jays, May 22 to 24.

With only one walk in four plate appearances in his first game, all eyes were on Ohtani during game two. At the top of the ninth inning, with bases loaded, Ohtani had a broken bat hitting a single into centrefield that scored two runs to tie the game at 3-3. Then, he was given the green light to steal his first base in the majors which eventually led to him scoring the game winning run. 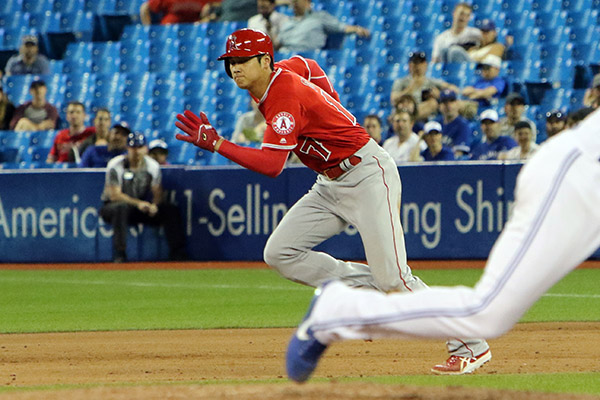 After his heroics, Nikkei Voice asked Ohtani, “What does it mean to you for your first hit in Canada to be such an important one?”

Through his translator, “Since this is my first time in Canada, I’m not sure if it’s going to matter at all, but we won the game today so I’ll remember this tonight.”

Since his debut at the end of March, Ohtani was awarded the American League Player of the Week for April 8, 2018 and American League Rookie of the Month for April. Looks like the curtain is a long ways from closing for this young phenomenon.

Watch below to see Shohei Otani hit a three-run homerun in his first time at bat in Anaheim, Calif.