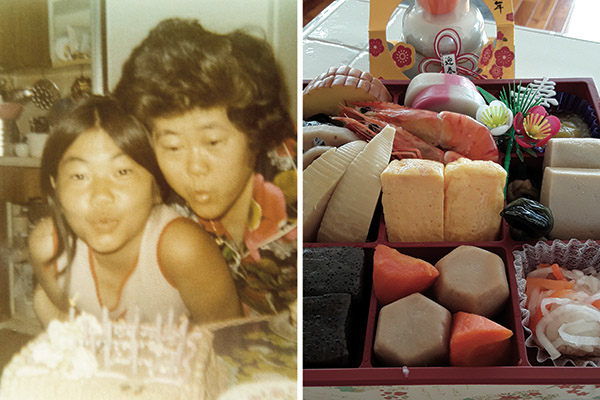 OTTAWA — The invasion of Ukraine by Russian troops is shocking and heartbreaking. I’ve been reflecting on my time working in the former Soviet Union (FSU) and Ukraine as an International Red Cross relief worker from 1993 to 1994.

With the collapse of the FSU in 1991, Ukraine became an independent state, and the population’s needs were significant. I was on a humanitarian mission to support the delivery of medical supplies to the elderly, children in orphanages, and women and babies in maternity hospitals.

I loved the Ukrainian people I met while there. They had a strong entrepreneurial and independent spirit, were proud of their culture, and made great food. Maybe I felt close to them because I grew up with Ukrainian students in my high school in Toronto. You could even study the Ukrainian language at my school. 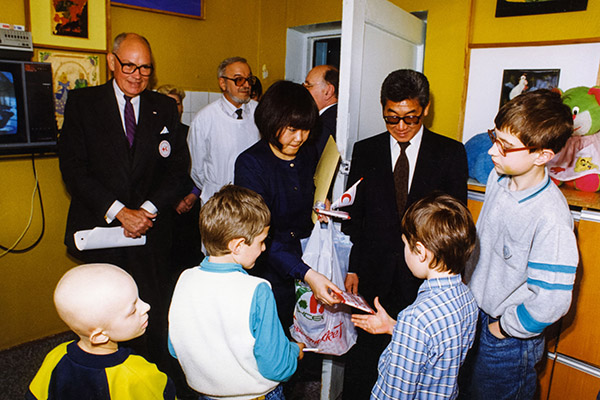 Columnist Caroline Ishii working as an International Red Cross relief worker in Ukraine from 1993 to 94.

The promise of freedom and free land

Ukrainians first came to Canada in the 19th century, and today Canada has the world’s third-largest Ukrainian population behind Ukraine and Russia. In 2016, 1.36 million people in Canada identified as having Ukrainian ancestry, about four per cent of the population, with over half living in the Prairies. Ivan Pylypiw and Wasyl Eleniak were the first Ukrainian settlers to arrive in 1891. They came to Canada for the promise of freedom, much like my grandparents from Japan. When the Ukrainian settlers came to Canada, they worked hard to preserve their language and culture because they could.

Before the independence of Ukraine, children had to learn the Russian language and culture at school, and Ukrainian could only be spoken at home. During my travels in the 90s, the Ukrainians I met were excited to use their language and celebrate their culture openly with their new independence. A whole generation has grown up in an independent Ukraine. And now, this freedom is threatened by the attack from Russian forces. My heart breaks for them and for those in Canada with loved ones in Ukraine. It reinforces that we can never take our freedom and rights for granted.

In spending time in Ukraine, I understood why preserving Japanese culture was critical to my mom, although she wasn’t in Japan anymore.

My mother, Suyeko Ishii (nee Inouye), was born in Richmond, B.C., and was sent to Japan as a young child after her parents died. The rest of her four siblings dispersed in different directions in Canada. After the Second World War, her brother Yosh found her and wanted her to return to Canada. I don’t think my mother wanted to leave Japan and her friends, but she missed her siblings and desperately wanted to reunite with them after twenty years. Growing up, my mother made us go to Japanese language school every Saturday, and she taught us about Japanese culture and food. In doing this, she wanted to keep alive the memories of a Japan she deeply missed.

I noticed a significant difference between Japanese people in Japan and Canada in recent visits to Japan.  While Japan is a homogeneous society and most of the population is Japanese, a Japanese Canadian is identified as different, visible, and not part of the norm, especially when my grandparents immigrated to Canada. We are all grouped as “Japanese” or “Asian,” no matter where we are born. When I went to Japan, people were surprised that I knew so much about Japanese culture and food. Moreover, they were astonished that I was familiar with most Japanese traditions and could cook Japanese food from scratch.

In Japan, you can pick up ready-made Japanese meals quickly and cheaply in supermarkets or the basics to base a dinner around, like yakitori, tonkatsu, or tempura. My mom didn’t have that choice. If she wanted to eat Japanese food and share this with us, she needed to buy the ingredients and make it. I imagine she thought if she didn’t teach us about Japanese culture, who would? You take learning about the Japanese culture for granted in Japan because it’s part of your upbringing living in a homogeneous society. 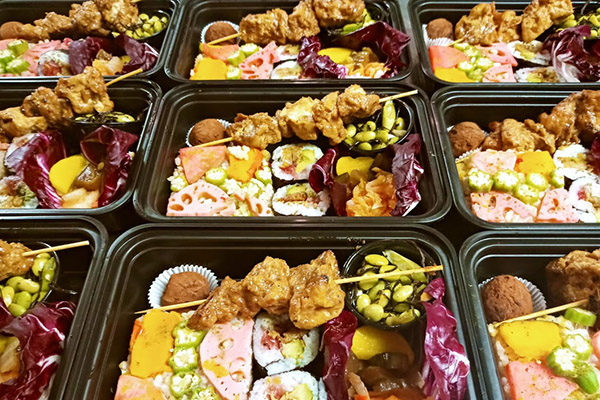 My mom’s way of preserving the culture was through food. Growing up, my mother made Japanese dishes almost every night. At dinner, we said the obligatory itadakimasu, meaning, “I am grateful for this food,” before we ate, and after, gochisousama, meaning, “thank you for the delicious meal.” And then we took off quickly.

For us, the meal satisfied our hunger. For my mother, the dinner fed something deeper. She would often stay at the table after we left to slowly finish her meal and tea as if she was savouring her past in doing so. 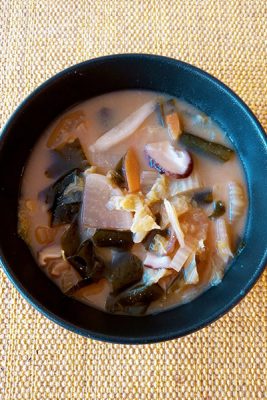 My mother kept many Japanese traditions in Canada, such as cooking special food on New Year’s Day, the most important holiday for the Japanese. She would do frequent shopping excursions to Sanko and Furuya stores downtown and have her friends in Japan send her ingredients to create osechi ryori, a complex array of dishes, each with a special meaning.

I love Japanese food. This love runs through our family. We still celebrate New Year’s Day with Japanese food, but with much less cooking. However, as we did with my mother, we always start the morning with ozoni, a soup with mochi rice cakes for good luck.

I often feel my mother close when I eat and cook Japanese food, even though she passed away over 30 years ago. Her life focused on eating, cooking, and sharing Japanese food. This thread continues through her daughters, the next generation, and the friends and clients I share my love of Japanese cuisine.

Food is powerful. It brings us together, shapes our memories, and brings us comfort. To honour the Ukrainian people, I share an excerpt from my memoir, The Accidental Chef: Lessons Learned In and Out of the Kitchen. It includes a recipe for dumplings that the Ukrainians call varenyky and Russians call pelmeni. Each culture has a dumpling of sorts. In Japanese cuisine, it is called gyoza.

May it provide some comfort in uncomfortable times.

Find Caroline Ishii’s recipe for Sauerkraut Dumplings with Cashew-Based Sour Cream from The Accidental Chef: Lessons Learned In and Out of the Kitchen below.

Excerpt from The Accidental Chef: Lessons Learned In and Out of the Kitchen (pp 78-80).

In Ukraine, while en route from Kyiv to the other side of the country by car, the driver said he wanted to make a short detour to say hello to his babushka (grandmother) in her dacha, a small cottage in the country. She was very happy when she saw us and insisted we eat some of her borscht, which was made with the vegetables from her dacha garden.

It was a simple soup, nothing special if you looked at it, but when I tasted it with her watching me intensely, I could feel the love she put in it. The deliciousness of the soup and the love between her and her grandson touched my heart deeply and made me cry joyfully. I looked at her and said in my broken Russian, “o-cheen’fkoos-ni,” to which she smiled and nodded. She looked back at her grandson eating, from whom she wanted the ultimate approval.

I also remember gatherings fondly in the Russian Red Cross office for a birthday or graduation celebration. We ate lots of food with shampanskoye, a local sparkling wine. When I sat down at one party, the table was filled with bowls of pelmeni, fresh dumplings, served with sour cream. Those dumplings are one of my favourite foods, and I was in heaven.

At ZenKitchen, my memories of being in Ukraine and Russia inspired me to create a vegan version of the dumpling filled with sauerkraut and a cashew-based sour cream. 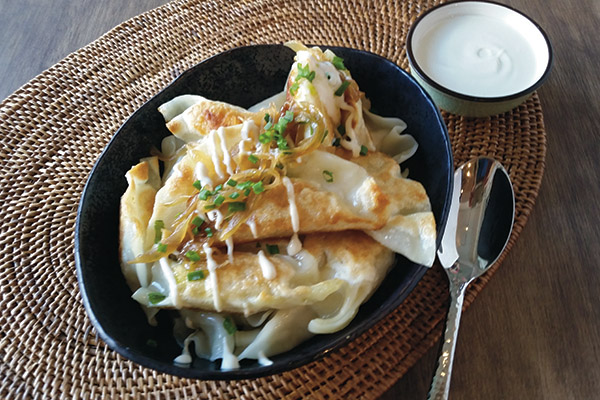 Place about a teaspoon of the sauerkraut filling in the centre of each dumpling skin. Dab a little water around the edge of the skin.

Fold over to make a half-moon shape and use the thumb and inside finger of one hand to press edges together firmly to make a tight seal. Ensure each dumpling is completely closed.

Place the finished dumplings on a baking sheet lined with parchment paper. In a large pot, heat water until there is a gentle boil.

Add some dumplings and, when they pop to the surface, remove with a slotted spoon and arrange on a serving platter. Serve with sour cream sprinkled with minced chives.

Notes: To freeze the dumplings for later use, lay them on a tray, and place them in a freezer for a couple of hours or overnight. When they are frozen solid, you can put them in freezer bags. When ready to cook, remove as many as needed and drop them into the boiling water without defrosting.

Soak the cashews overnight or for a few hours. Drain.

In a blender, combine cashews, apple cider vinegar, and ½ cup of water at high speed. Slowly add the remaining water until it becomes creamy. Season with salt to taste.