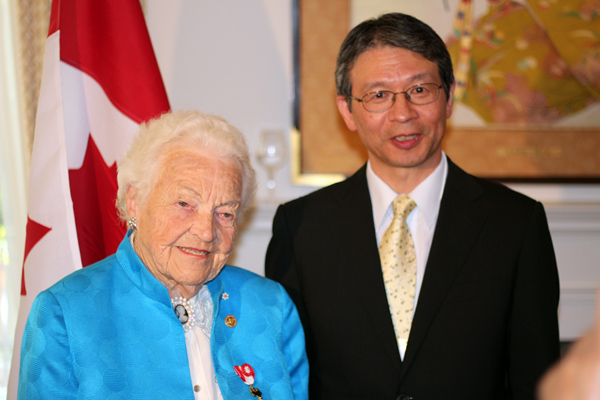 Canada’s longest running mayor was honoured tonight by one of the world’s oldest civilization.

Mississauga mayor Hazel McCallion was given the Order of the Rising Sun in recognition of her efforts to build relations between Canada and Japan.

The award, a sun surrounded by rays and a rosette, is Japan’s fourth highest honour with the likes of actor George Takei as recipients. Some 80 Japanese businesses now call the Ontario city their home including companies like Canon and Toshiba, and the award recognizes her contributions to helping those businesses take off.

“They look after their employees and we value their contribution to our economic base and communities,” she said. “And we welcome any number of businesses.”

The award also commemorated McCallion’s long-lasting relationship with Japan and her long-time participation in a sister city initiative.

Since 1981, Mississauga has been the sister city of Kariya, Japan. Located in the Aichi prefecture, Kariya is a bustling city home to thousands and quite a few businesses most notably Toyota.

“When I look back on it, I just feel the Japanese business community in Mississauga has been very much a part of life in Mississauga and very much part of my life as mayor,” McCallion said. “I thank them for their contributions and it’s a beautiful relationship and we only have one sister city in the world. We’ve remained with one and that has been Japan.”

Both locations have parks named in honour of their sister cities, but horticulture aside the relationship has been mutually beneficial helping bring Japanese business to the Great North and Canadian business to Japan.

“This is a true friend of Japan,” said Consul General Eiji Yamamoto. “I have been impressed time and again by your boundless energy. I must quote the great Canadian singer Neil Young and say that indeed you are like a hurricane.”


[…] June, Mississauga mayor Hazel McCallion, 93, was given the Order of the Rising Sun in recognition for building strong relations between Canada and […]