Moment in History: “The Ferry to Kaslo” 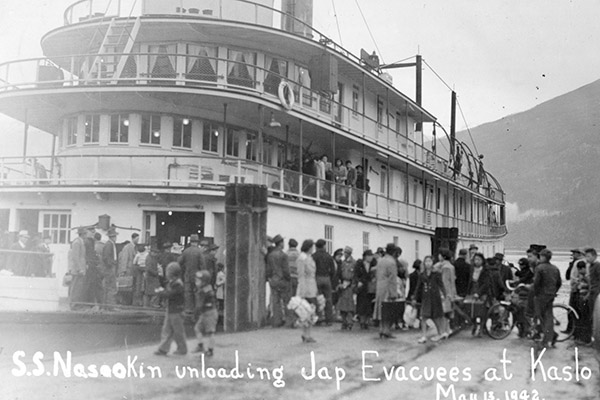 During the Second World War, over 22,000 men, women and children of Japanese descent were forcefully relocated by the Canadian government, despite many of them being Canadian citizens by birth or by right.

Of the 22,000, approximately 1,100 Japanese Canadians were interned in Kaslo, B.C.  Kaslo was a ghost town and home to less than 500 residents before the Japanese Canadians. Many of the buildings were unoccupied and dilapidated.

The B.C. Securities Commission leased out 52 o`f these buildings as housing complexes as part of the relocation plan for the Lower Mainland. Perhaps the most notable of these buildings was a hotel called the Langham Building. A hotel at the time, it became home to over 80 Japanese Canadians arrived. The rooms were small and cramped, yet six to eight family members were assigned to a single room. The B.C. Government began sending Japanese Canadians in the Lower Mainland to Kaslo in May of 1942.

This photograph depicts the first wave of Japanese Canadian arrivals to Kaslo on May 13. They had travelled on the SS Nasookin, a ferry once used by the Canadian Pacific Railway Company to transport workers across the Kootenay Lake and surrounding waters. Between May and October of 1942, nearly 1,000 Japanese Canadians were ferried over from Hastings Park to Kaslo. They were interned until 1946—a year after the war ended.

— By Nathan Yeo and edited by Kara Isozaki

Title: The Ferry to Kaslo