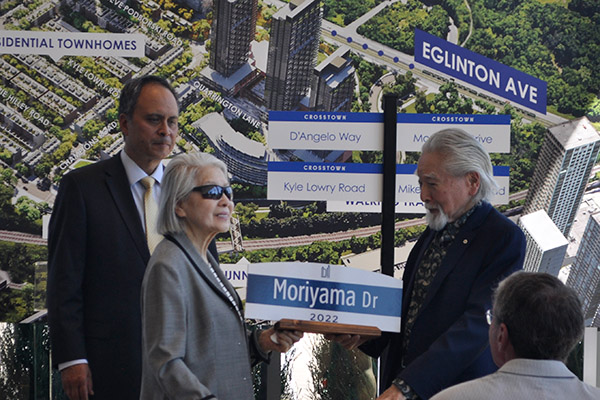 Toronto Deputy Mayor Denzil Minnan-Wong with Sachi and Raymond Moriyama during a road naming ceremony on June 13. Moriyama Drive is one of eight streets honouring individuals who have made a significant impact on the Don Mills neighbourhood. Photo credit: Kelly Fleck.

TORONTO — World-renowned architect Raymond Moriyama‘s buildings are used by thousands of people around the world every day, from the Canadian War Museum in Ottawa to the Toronto Reference Library, the 83-acre Centennial King Abdul Aziz Historical Centre in Central Riyadh, and the Canadian Embassy in Tokyo.

Soon, a new Toronto road with Moriyama’s name will also be used by thousands of people every day. Nestled near the Japanese Canadian Cultural Centre, Moriyama Drive is one of eight new roads honouring outstanding Canadians (and one American) who have made a significant impact on Toronto’s Don Mills community.

All eight streets are part of the new Don Mills Crossing development, located on the corner of Don Mills and Eglinton. The massive 60-acre site will be an entire neighbourhood, featuring residential, office, and retail buildings, community housing, parks, open spaces, and, what will be, the city’s largest community centre.

Moriyama Drive, and the seven other new street names, were unveiled at a road naming ceremony hosted by the City of Toronto and Deputy Mayor Denzil Minnan-Wong on June 13. 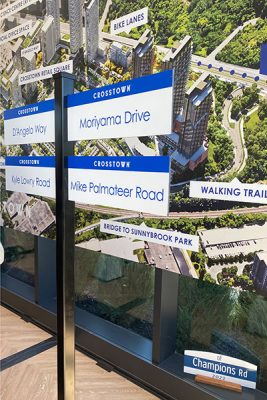 Moriyama Drive will be part of a new neighbourhood at Don Mills and Eglinton in Toronto.

“Raymond hasn’t lived in Don Mills, but Don Mills would look very different without him,” said Deputy Mayor Minnan-Wong during the dedication ceremony.

“It is particularly fitting that the road we are naming after Raymond Moriyama starts at Wynford Drive, the home of the Aga Khan Museum and Japanese Canadian Cultural Centre; it wraps around the whole of this community and ends just south of Eglinton Avenue, tucked in behind the Science Centre, connecting some of his most loved works.”

In just the Don Mills area, Moriyama’s projects include the Ontario Science Centre, the first Global TV headquarters, the City Garden Centre and Pavilion at Toronto Botanical Gardens, and the original Japanese Canadian Cultural Centre on Wynford Drive. Also on Wynford Drive is the Aga Khan Museum and Ismaili Centre and Garden, for which Moriyama & Teshima Architects was the architect of record.

Moriyama’s designs are revered not only for their striking physical beauty, often connecting the architecture with its surrounding nature and landscape, but his attention and consideration for how people will use and experience the building in everyday life.

Opened in 1963, the Ontario Science Centre was Moriyama’s largest project as an independent architect before partnering with architect Ted Teshima. The centre’s trailblazing design marked Moriyama as a leader in innovation and design in the architectural world. The design invited people to learn through hands-on interaction, which was unheard of in museums at the time. The centre changed how people thought about museums and how they could be designed and used. Today, over 130 museums around the world have been inspired by Moriyama’s design.

At 28 years old, Moriyama designed the original Japanese Canadian Cultural Centre at 123 Wynford Dr. in Toronto. The building evokes the image of a pagoda nestled in the trees, recalling one of Moriyama’s first architectural projects, a treehouse he built at 13, while interned in Slocan Valley with his mother and siblings; his father arrested and sent to a prison of war camp in Ontario. 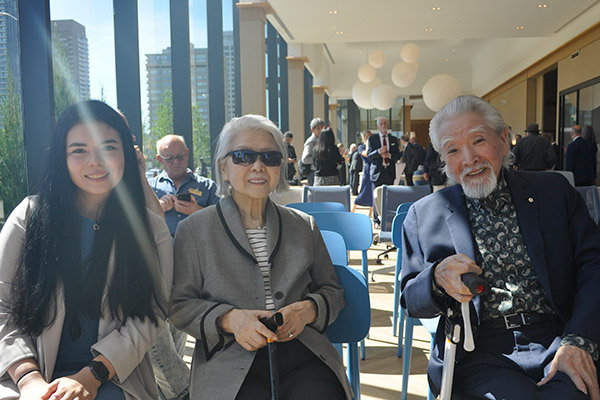 Raymond (right) with his granddaughter Jacqui and wife Sachi during the road naming ceremony on June 13.

Opened in 1964, when the Japanese Canadian community was still rebuilding after the forced uprooting, dispossession, and internment during the Second World War, the centre was a way for Japanese Canadians to re-establish themselves in Canadian society. To build it, 75 families mortgaged their homes to secure funding for the centre, and Moriyama was tasked to design the centre on a budget of $14 per square foot.

“The Sansei grew up in Toronto before the city became a culturally diverse metropolis. We were a visible minority just trying to fit in. It was not common or easy for the Nisei to breakthrough and be heralded by the broader population in a profession, and the Sansei paid attention,” says Japanese Canadian Cultural Centre President Gary Kawaguchi. “Raymond’s success inspired confidence in the Sansei to reach higher than just fitting in. This lasting impact on the Sansei generation, combined with his achievements in architecture, resulted in Raymond being one of the early recipients of the Sakura Award. This JCCC award recognizes exceptional contributions made by individuals to the promotion and exchange of Japanese culture and enhancing awareness of Nikkei heritage within Canada and abroad. Raymond is a very deserving sempai for generations to follow.”

The community eventually outgrew the original centre and moved down the street to where it stands today on Garamond Court. The two ends of Moriyama Drive will connect the Ontario Science Centre and the original and current Japanese Canadian Cultural Centre.

“All the new streets in this community have a strong link to Don Mills, and when people ask about Moriyama Drive, they will be made aware of the Ontario Science Centre and the JCCC amongst his many achievements,” says Kawaguchi. 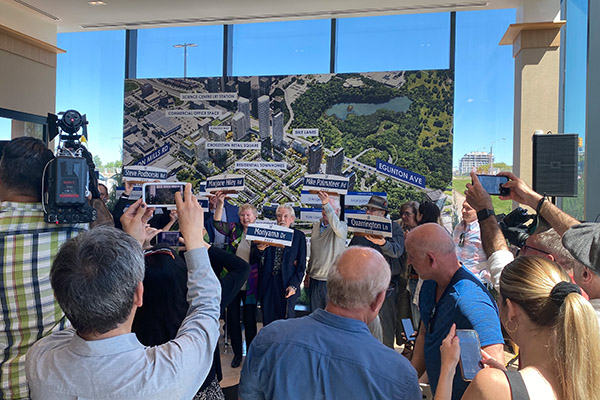 As the Don Mills neighbourhood continues to grow and change over the next couple of decades, Moriyama Drive will endure as a lasting and permanent symbol of Moriyama’s achievements.

“I believe that Raymond Moriyama Drive will continue to remind Japanese Canadians to confidently reach higher and be proud of our heritage,” says Kawaguchi. 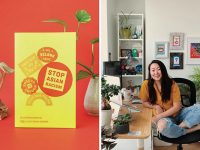