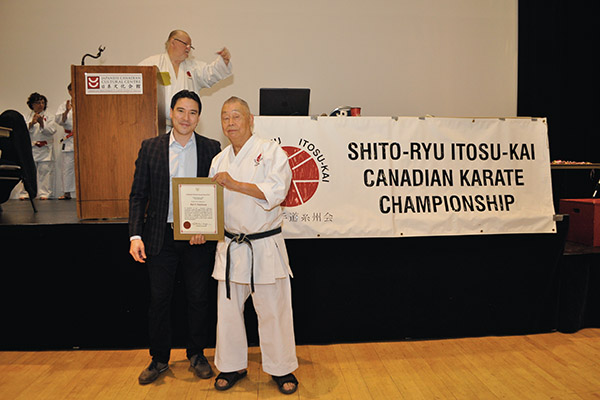 TORONTO — On April 21, Shihan Kei Tsumura, founder of the Japanese Canadian Cultural Centre Karate Club in Toronto was presented with the Don Valley West Community Service Award for outstanding volunteer contributions in the city of Toronto. The award marks Tsumura’s 55th anniversary as the founder and Master Sensei of the club.

Shihan Tsumura is one of the highest ranked practitioners of Shito-ryu Itosu-kai Karate in the world. 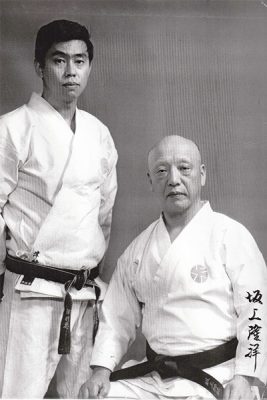 A photo of Shihan with O’Sensei Ryusho Sakagami around the time that he started the JCCC Karate Club. Photo courtesy: Shihan Tsumura.

For more than half a century he has shared his passion for the art with generations of students as a volunteer at the JCCC. He has overseen the establishment of Shito-ryu Itosu-kai Karate clubs across Canada and around the world.

The Nikkei Voice caught up with Shihan Tsumura and asked him to share a few words on the eve of his anniversary.

This is what he said.

“I’d like to begin by taking this opportunity to thank all those students from all around the world who made this possible. After 55 years, it is easy to enter into a world of nostalgia and let my mind journey back to those days, through the Golden Age of Karate, when we were kings, rock stars and life was fine as wine.

The ships that passed us nightly through the years included the full spectrum of people: dedicated, talented, kind, generous, and loving. As well, there were unbelievable egomaniacs. Racists, thieves, bullies, who often shocked us with a ménage a trois of emotion: arrogance, insolence, ignorance, and more. But we prevailed. It was fun.

They come from all walks of life. We’ve had soldiers, singers and scientists. We’ve had doctors, dancers and druggists (remember the 60’s and 70’s). There were judges, janitors and journalists. We’ve had our share of lawyers, labourers and low lifes. Not to forget priests, politicians and policemen. They come from everywhere. There have been many bright lights in the firmament of eternity. 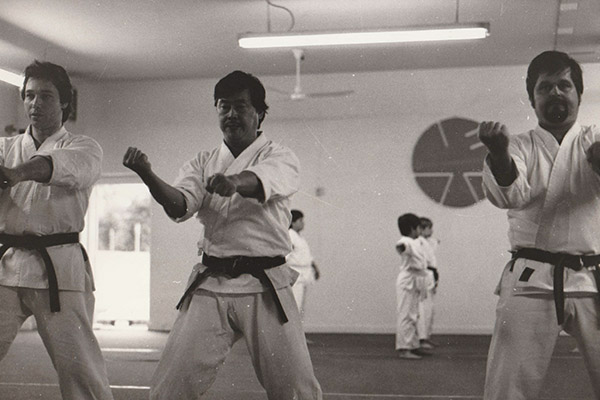 Not much has disturbed the even tenor of our lives. Especially, when we’ve always had karate to point out a new trail ahead.

I don’t have enough space here, or the urge, to indulge in anecdotal reminiscences, except perhaps to shout out some country’s name and hear the resounding echoes that bring me happiness: Japan, Holland, France, Germany, Austria, Argentina, Switzerland, Luxembourg, Italy, America and Chile. I’ll always remember Ireland. It took only 13 visits.

Sometimes, you catch yourself remembering things.

One time landing in a plane, loaded with some Argentinean politicians. Rows of crowded fans shouting and waving flags lined the airport. The suits deplaned first. Quiet response. We went next and the noise was deafening! The politicians turned their heads to us in amazement. It was brilliant.

A group of us eating in a street restaurant in South America and watching ourselves performing on the television news. Hey, everybody deserves their 15 minutes on life’s stage.

How about the kvetching night in our guesthouse, where we noticed a student, tip-toeing to the fridge for a midnight snack. He lost his shorts on the fridge door, but held on to his turkey leg before crashing to the floor. That was priceless. 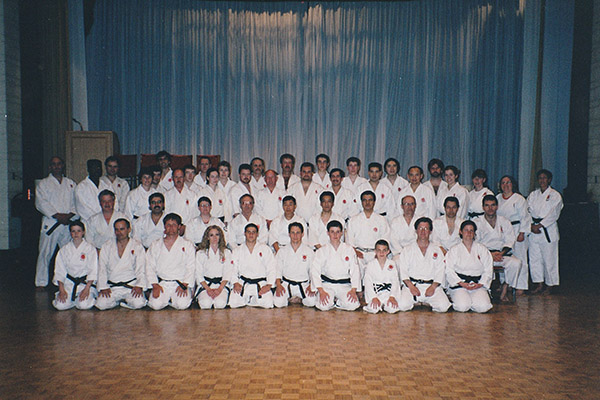 Alright. I’m becoming anecdotal. But 55 years has been a long karate road. There is no last chapter to karate, perhaps only the rowing of Mabuni’s boat splashing to the island of Budo. As with today, we all struggle against chaos and unpredictability. All we can do is try to put a delusional order to everything and hope for the best.

Memory often is an unreliable territory and the mists of time blur it further. Sometimes just when you thought you had all the answers, and carefully placed yourself in the right direction, life starts asking all the wrong questions. So much for Feng Shui. But that’s all right, too. I suppose there is never an ending to karate. The memory of everyone who has lived it differs from that of the other. That is the way it should be.

Before I run out of puff, to everyone that has come out over the years, and to all of our sponsors, thank you again for making the last 55 years possible. I am truly privileged to have had the opportunity to spend some time on that ship with you.

Our doors are open, and more are always welcome aboard!”