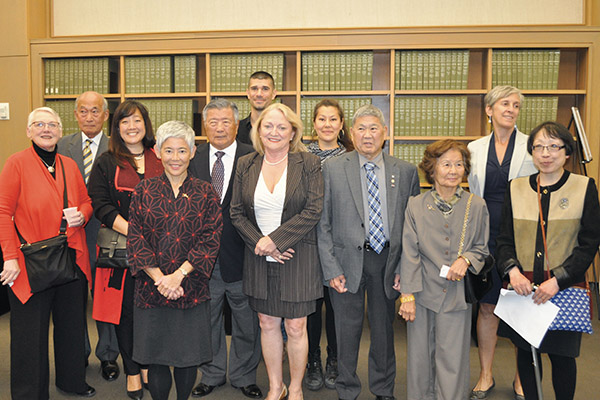 OTTAWA — The conference, “Revisiting Japanese Canadian Redress” examined the pivotal role of archival records in the achievement of the historic settlement on its 30th anniversary, on Sept. 20.

The conference was a collaboration between the Ottawa Japanese Cultural Association (OJCA) and  Library and Archives Canada (LAC) in Ottawa. There could not have been a more appropriate place to discuss, celebrate and reflect on the historic moment in Canadian human rights history.

“It is a reflection on the power of archival records when coupled with citizen activism,” said co-MC Sachiko Okuda, president of the OJCA.

The conference was a homecoming for some, who were involved in the redress movement 30 years ago, and for others, there were experiencing these stories for the first time.

The conference was MCed by Sachiko Okuda, OJCA president and Dr. Henry Shibata, a surgical oncologist and former internee.

Two moderated discussions, the first between Art Miki, who led the redress negotiations as NAJC president and Ann Scotton, the first executive direction of the Japanese Canadian Redress Secretariat. The second discussion looked at the future after redress, and included Ted Itani, a former internee, retired military officer and humanitarian and Andrew Cardozo, former executive director of the Canadian Ethnocultural Council. Both discussions were moderated by Melisa Kamibayashi-Staples, an OJCA board member, who draws inspiration for her community involvement from her parents involvement in the redress movement.

The discussions were coupled with excerpts of the play, The Tashme Project: The Living Archives, performed by co-creators Matt Miwa and Julie Tamiko Manning. 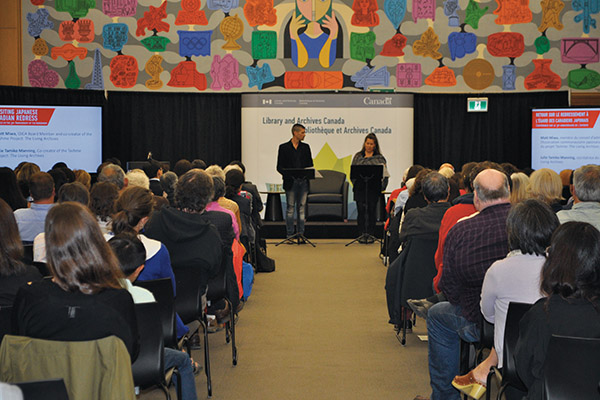 Matt Miwa and Julie Tamiko Manning perform excepts of their play, The Tashme Project: The Living Archives at the conference.

It was in this very building where, in the 1970s when the 30 year ban was lifted on Second World War archival material, researcher Ann Sunahara found government documents that shaped the course of redress negotiations.

During her research, Sunahara found government documents that proved racist motivations were present in both active and passive forms in the treatment of Japanese Canadians. Ultimately discovering the RCMP and military had determined Japanese Canadians were never a threat to national security.

“It was that kind of information that many people did not know about, but by revealing some of the actions by the government that today would seem unjust, I think it is through research that we were able to develop our position,” said Miki.

This kind of information helped sway public opinion, and was an example of how archival information can hold governments accountable, said Kamibayashi-Staples. She added that documentation can only get social change to a certain point, a movement needs people who are willing to find that information and then take action.

The LAC was also where the Price-Waterhouse study took place. The study found that the Japanese Canadian community had lost $330 million in revenue and $110 million in property, calculated in 1986 dollars.

This information was important, because it was a way to quantify what the Japanese Canadian community had lost.

“Canadians understand the value of money, and this is absolutely clear evidence that [$330 million] that’s big, big money. In current dollars, what that could have grown to, and what people could have invested and how their lives could have been different if their homes and their business hadn’t been sold,” said Scotton.

Volunteers and staff poured through microfiche and the meticulous internment records to put together  the study. A bulk of the records were from 1942, when every Japanese Canadian 15 years or older was forced to declare all of their financial assets to the office of the custodian of enemy property.

“When there is government wrongdoing, the government’s own documents can play a pivotal role in holding it accountable and protecting human rights,” said Gabrielle Nishiguchi, LAC archivist from the government archives division.

Nishiguchi explained that 15,000 surviving case files were statistically sampled, and in the final sampling, 1,482 case files were reviewed. She recalls the dedication of Akira and Molly Watanabe, who spent 20 nights in the public archives after full days of work to complete the sampling. They are just two of the many hardworking volunteers who helped collect this valuable information.

“It was grueling. It was painstaking work,” says Nishiguchi. “Some researchers were unable to continue because of nausea and eye strain induced by moving film and many poor quality images.”

While going through custodian files, Nishiguchi said she still has a crystal clear memory of  finding a case file of an elderly man who had died in one of the camps. In the custodian file, under his possessions, the bureaucrat had included: undershirt, used.

“I remember feeling immensely angry, then pain, then a sense of responsibility to remember this man’s passing,” says Nishiguchi in a powerful speech. “To share it, to help us come to terms with universally condemned government actions, all of which would eventually lead to healing. These emotions were born from a few tight written words.” 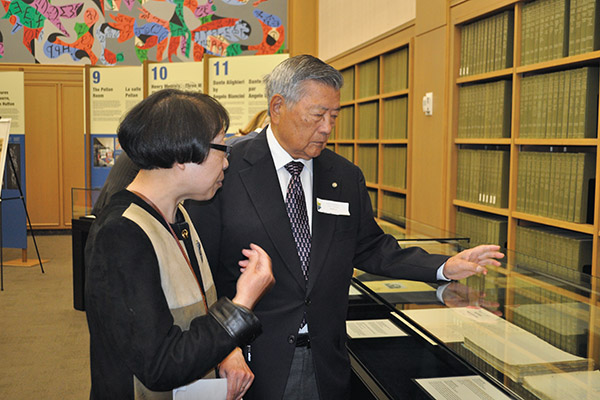 Gabrielle Nishiguchi and Dr. Henry Shibata discuss the ledger with the names of 3,964 Japanese Canadians who were deported in 1946, nearly half were the Canadian born children, including Dr. Shibata.

The evening in such a fitting location, recognized the importance of archival information and the power in those quiet rooms of Library and Archives Canada. But without citizen activism to seek out those documents, hold governments accountable and evoke social change, redress could not have happened. The archival records were just one part of a culmination of citizen activism, actions, protests, writings, speeches, lobbying, people, organizations, support and negotiations that made redress possible.

Co-MC Dr. Henry Shibata echoed these sentiments and closed the evening with these remarks:

“I believe the significance of observing this anniversary event in this wonderfully informative manner is to allow all of us, and all Canadians of any background to review what really happened and to pledge that such overt discrimination of any type should not be repeated or tolerated and aspire to the best of our abilities to make this world a better and safer place.”