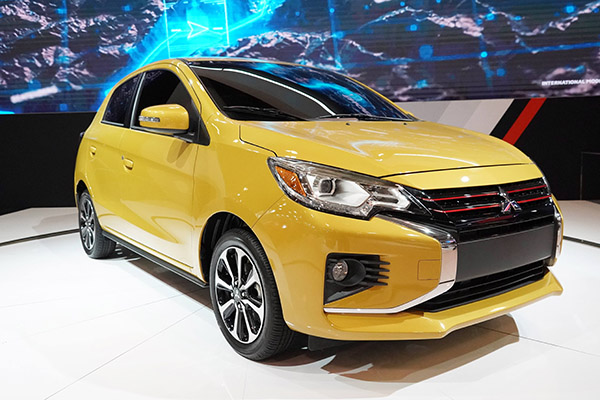 TORONTO — Japanese automobiles were polished up and on full display at the Canadian International Auto Show in Toronto, Feb. 14 to 23. Included was Mitsubishi Canada, who celebrated the company’s 100th anniversary by going through brand transformation, stepping away from a full lineup of vehicles, to focusing on SUVs.

“There’s naturally a transition of consumers that are just gravitating out of cars, from compact cars or subcompact cars, to SUVs,” Steve Carter, marketing director of Mitsubishi Canada told Nikkei Voice in an interview at the auto show. “We’re fortunate that our lineup really fulfils that need that consumers are looking for.”

Subcompact SUVs and compact SUVs are the fastest growing segments in Canada, says Carter. Included in Mitsubishi’s SUV lineup is the Outlander PHEV, which is Canada’s top selling plug-in hybrid and 2020 Family Green Car of the Year. 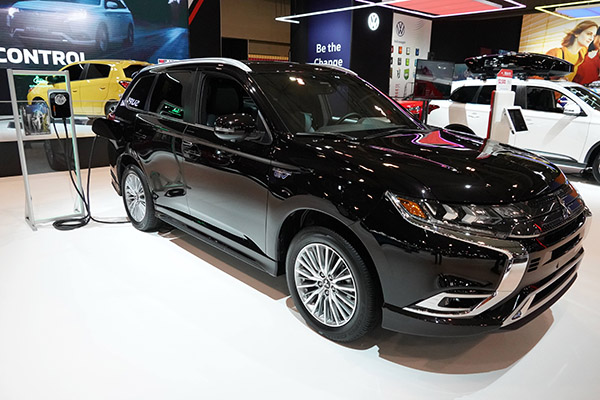 The only vehicle in Mitsubishi’s lineup that is not an SUV, is the Mirage. The 2021 model, like the Mitsubishi brand, has had a refresh and upgrade and was centre stage in the Mitsubishi booth at the Toronto auto show. The 2021 Mirage will hit Canadian dealerships in the late summer. The redesigned Mirage was debuted at Montreal auto show in January. The Mirage has been popular in Quebec, where consumers prefer more European-style, smaller vehicles. Quebec accounted for nearly 40 per cent of all Mirages sold in Canada last year, says Carter.

The new features in the restyled subcompact hatchback, include new safety features and designs, including front and rear design.

“For the vehicle, we have not only changed the exterior look of the vehicle, you look at the front end of the vehicle and now it has the dynamic shield, which is one of the key characteristics in all of our vehicles, right across the lineup,” says Carter.

The Mirage is one of the most affordable cars in Canada, the 2020 model starts at $12,298. It is also the most fuel-efficient, non-hybrid car in the Canadian car market, and that fuel efficiency means lower fuel bills.

“I think [fuel-efficiency] has always been something that is important, we are a very pragmatic buyer, when you look at the purchase reasons, people are looking for something that provides quality and reliability, they want to get good fuel economy,” says Carter.

The Mirage is an entry vehicle to the brand and looking to appeal to young couples and first time car buyers. The average age of Mirage buyers is 40, whereas other compact hatchbacks is around 52, says Carter. The new features of the Mirage are designed to appeal to younger drivers. Most noticeably is the 7 inch “infortainment” display, which is compatible with Apple Carplay and Android Auto. Drivers can safely drive with both hands on the steering wheel while still having the features of their phone, like music, voice calls and voice-to-text capabilities. 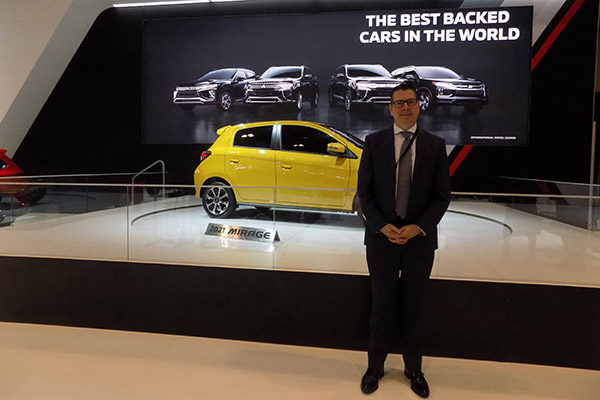 “Everybody has their phone today and its constantly in their hands,” says Carter. “How do you make it as easy for me, when I climb into the car, to still do those things?”

The Mirage also boasts new safety features like front end collision mitigation and pedestrian protection, meaning the car will stop itself if a pedestrian steps out in front of it. Other safety features include auto high beam, turning off the high beams when it senses an oncoming car and lane departure detection, which warns the driver if the car drifts out of its lane.

“It’s a good introduction to consumers to the Mitsubishi brand, especially if you were looking for a vehicle that’s very affordable, provides great fuel economy and provides great reliability from a quality perspective,” says Carter. “We are a Japanese brand, Japanese automotive brands have always been known for their quality, and that’s not any different for Mitsubishi.”