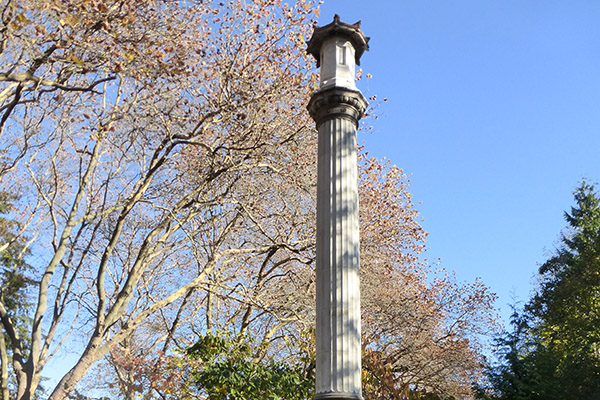 Through the photos included with this article, it becomes clear that the cenotaph has undergone many changes in its nearly 100 year history, each with significant stories behind them. How did the site change over the years? This is a question that could be answered by referring to certain events in history following the establishment of the cenotaph. 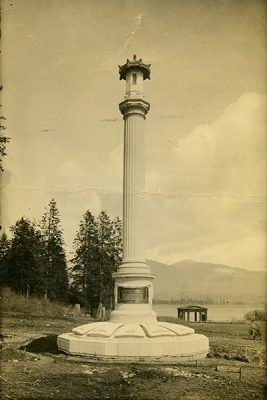 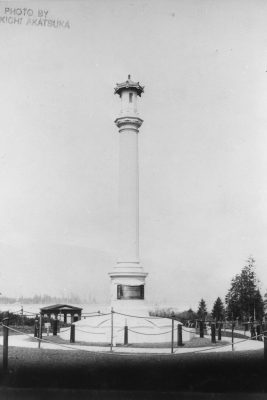 The Japanese Canadian War Memorial was built by the Canadian Japanese Association (CJA) in 1920, placed in an open field with no trees around it. On the cenotaph are names of Japanese Canadian soldiers who fought for Canada during the First World War, including men who had survived, as well as men who were killed while defending the country through various battles, in particular: Vimy Ridge and Arras Front in 1917.  On top of the cenotaph is a Japanese lantern, which symbolized unification between Canada and Japan.

Although the plaques remained unchanged, there were a few changes made to the cenotaph as a whole. The first change, just a few years after the erection of the cenotaph, was the planting of cherry trees, including the Shirofugen in 1920, Ojochin in 1925, and the Shirotae cherry trees in 1932. These cherry trees would come to serve many symbolic interpretations, many relating to the fallen soldiers. During the Second World War, the monument’s lantern was extinguished, as Canada had declared war on Japan and established Japanese Canadians as enemy aliens of the state.

The lantern was not relit until 1985. In a ceremony, 98 year old Sergeant Masumi Mitsui, who served in the First World War and fought in the Battle of Vimy Ridge and Battle for Hill 70, relit the lantern. The monument was restored and a fence was built around the monument.

Following this restoration, the monument underwent two more recent phases of refurbishment. The first phase began in October 2014 and included the remodeling of the cenotaph. The limestone was polished white and the petals on the base were cleaned.

Following this, with funding from Heritage BC’s Heritage Legacy Fund, a second phase of refurbishment was established in February 2015. This included filling in cracks on the marble lantern on the top of the cenotaph, as well as replacing the glass windows on the cenotaph with custom made panes to match the design of their originally established era.

Through the photos included here from 1920 to 2014,  the Japanese Canadian War Memorial had changed in that time. In the first photo, the cenotaph stands on gravel, and is surrounded by barren land. 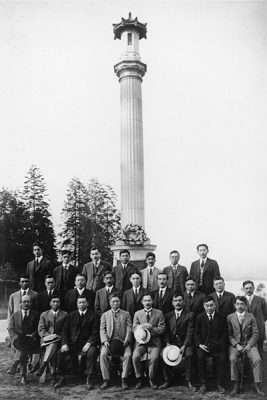 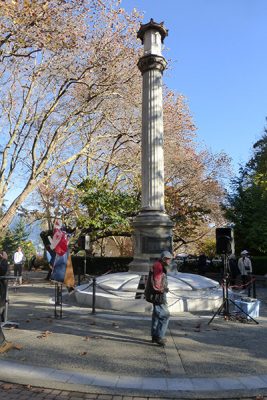 In the next photo, a fence now surrounds the cenotaph. In the third photo, a wreath is included, as well a group of people posing in front of it, including Tadasu Ide and Kochiro Sanmiya, the president of the CJA.

The final photo shows what the cenotaph looks like today,  the cherry blossom trees have grown out and the monument is enclosed by a fence and a tidy, cement flooring.

When we look at the memorial across its history, we reflect on all the changes that have been implemented to it, to preserve and remember the stories, the hopes, and the sacrifices of those who fought, lest we forget.

—Written by Stefanie Petrovich and edited by Nathan Yeo

“The History of the Cenotaph”


Thank you for this article. But where is the cenotaph?

The cenotaph is in Stanley Park in Vancouver, on the south side of the Lumbermens’ Arch Park Picnic Area and the back of the Vancouver Aquarium.


The horrors of what Canada did to the Japanese still haunts me. This is a great reminder what they did for Canadians…..lest we forget.
Where is it?