The legend of Taro comes to life on the ice 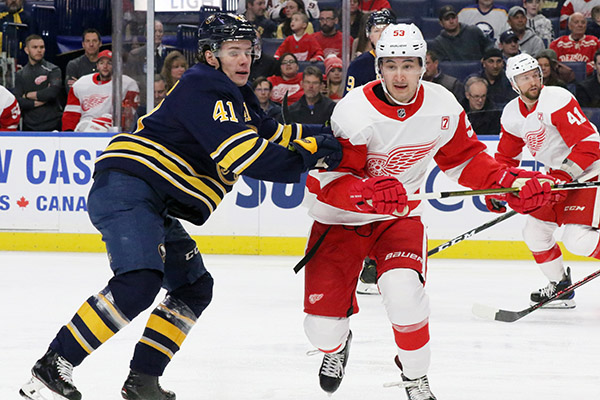 Taro Hirose of the Detroit Red Wings versus the Buffalo Sabres Victor Olofsson, during their game on March 27 at the KeyBank Center in Buffalo, N.Y. Photo credits: Dr. Jonathan Eto.

With his idle time, he thought it would be funny to draft a fictitious player and enlisted the help of Sabres’ PR Director Paul Wieland. As the excitement of this idea grew, Wieland developed the outlandish character of Taro Tsujimoto. He decided to make him Japanese so fact-checking would be difficult and with that, the layers of joke thickened. He chose the name from Tsujimoto Oriental Arts, Goods and Foods store, which he frequently drove by. Wieland called the owner, Joshua Tsujimoto, asking for popular Japanese boy’s names.

So with the 183rd pick overall in the eleventh round, Taro Tsujimoto from the Tokyo Katana’s was drafted. Only after training camp opened did Imlach reveal the hoax. There was tremendous media coverage as Imlach kept up the ruse with reporters. A stall was even set up for him. Not even the team’s owner knew. For years, fans embraced the ‘legend of Taro‘ and would chant, “We want Taro,” when the Sabres would fall behind.

Now there is a real Taro in the NHL, Taro Scott Hirose, who signed a two-year entry level contract with the Detroit Red Wings in March after finishing his third season with the Michigan State Spartans. 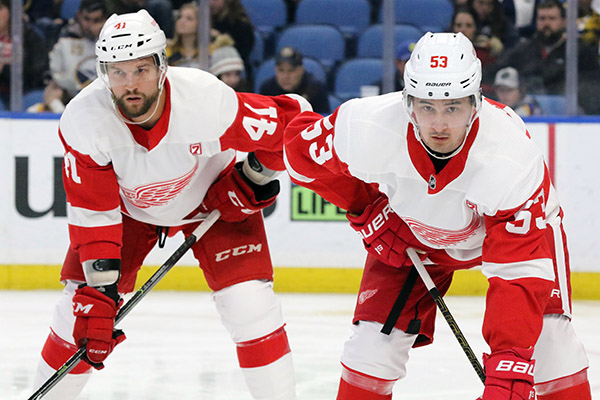 Luke Glendening and Taro Hirose of the Detroit Red Wings during their game against the Buffalo Sabres at the KeyBank Centre in Buffalo on Mar. 27. Photo credit: Dr. Jonathan Eto.

The 23 year old was born in Winnipeg and raised in Calgary, where he started his hockey career playing for the Calgary Northstars Sabres AAA Program and winning the 2011 Alberta Cup. He joined the prestigious Edge School for Athletes and played in the BC Hockey League with the Salmon Arm Silverbacks. He won the club’s Rookie of the Year honours in 2014-15 and in his second season, he was elected alternate captain. He became a Michigan State Spartan in 2016 and garnered several awards including; Outstanding Rookie Award and named to the Big Ten (NCAA) First All-Star Team, Player of the Year.

Despite attending two NHL summer development camps, he tendered a contract only a week before making his NHL debut this March. In the previous ten games leading up to his debut, the Red Wings had only won two games of their previous ten and were among the NHL’s worst teams.

In his first game, versus the New York Rangers, their fortune changed as Hirose scored an assist on the first goal of the game in a 3-2 win. The skilled playmaker has made a seamless transition to the NHL, continuing his solid play with an assist in each of next four games. His fifth assist came in the overtime frame in Buffalo. Though the Taro chants were not coming from Buffalo fans of old, a new hero was emerging. 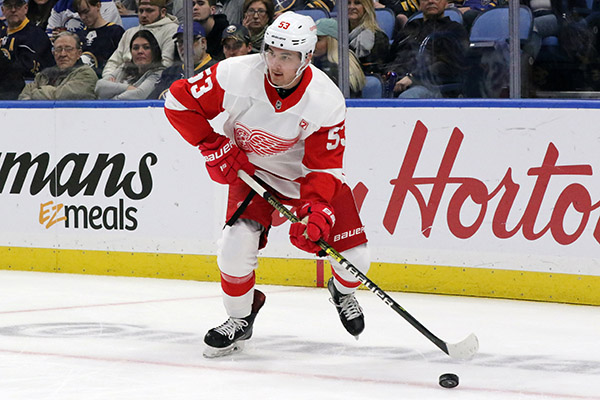 Taro Hirose of the Detroit Red Wings during their game against the Buffalo Sabres at the KeyBank Centre in Buffalo on Mar. 27. Photo credit: Dr. Jonathan Eto.

Nikkei Voice caught up with Hirose after the game and asked how it felt to be on a five game point streak.

“It feels good, it’s awesome. I think it definitely has a lot to do with my teammates getting open and just really making it easy,” he replied. “I’m definitely more of a distributor so I just try to get them the puck in good areas where they can make plays.”

Taro plays on the third line, and this was his first opportunity to play in overtime.

“For the coach to have enough faith in me to throw me out there on a 3-on-3 situation is really awesome,” he says. “And that’s what you want to work toward, is being able to be put in those defensive and offensive situations.”

Though his scoring streak ended at five games, his early success should not be overlooked. The last first overall draft pick in NHL history to score a point in each of his first five games was Sidney Crosby during the 2005-06 season. Hirose finished the season, playing the final ten games of the season amassing one goal and six assists. His first goal was the game-winner in a 6-3 win over the Boston Bruins on March 31. Detroit finished 28th in NHL standings but won seven of their final ten games after Hirose joined the team. Competing at the top level is always a challenge and Hirose will have to compete for a spot on the team despite his recent success.

We hope to see him start next season with Detroit but he has also expressed that he is going to finish his degree in finance. Hirose was told about the Tsujimoto story when he reached MSU and found it quite humorous. Let’s hope for a much more successful tale for this Taro.