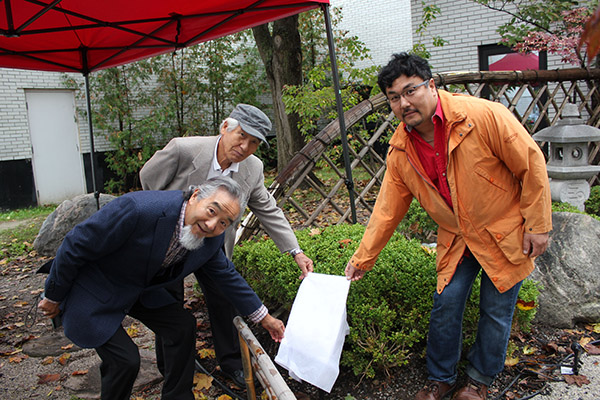 TORONTO — When the construction concludes on a landscape project, the work only just begins. While a building architect works with steel, wood, and brick, landscape architects work with plants, trees, shrubs, and flowers, which requires maintenance and care, explains Scott Fujita, the landscape designer behind much of the garden space at the Japanese Canadian Cultural Centre.

“Usually for a building architect, after the construction finishes, that’s it. But landscape [design] is different. After the construction is finished, that’s the beginning of the garden,” Fujita tells Nikkei Voice in an interview. “Because [you’re] using live material, plants are growing, and everything is growing. That’s why we need maintenance.” 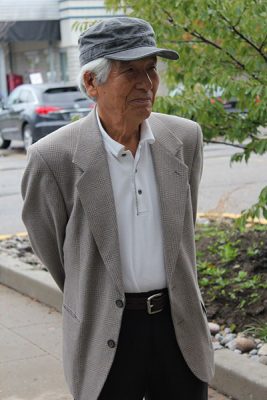 Scott Fujita at a small dedication ceremony at the JCCC on Oct. 16. Photo credit: Cary Rothbart.

Fujita’s work designing and quietly caring for the garden was recognized with a ceremony unveiling a plaque by the front entrance of the JCCC on Oct. 16.

The dedication was to commemorate Fujita’s many years of service in designing and maintaining the Japanese garden by the front entrance, Kobayashi Court, and surrounding landscape at the JCCC. When property manager Nao Seko started looking after the JCCC building two years ago, he learned Fujita was ready to retire. Seko asked Fujita to show him what needs to be done in the garden. He quickly realized that Fujita and his friend Ben Nishitoba were going above and beyond when caring for the garden, Seko said during the dedication ceremony.

“Scott started to show me how to take care of all these trees, and so after working about an hour and a half to two hours on one tree, I said, how can one [person] do all this work,” says Seko. “All the work that goes on in the garden, no one ever sees the actual work being done. The garden that we all appreciate, Scott is the mastermind [behind it], and together with Ben, they put all of this together so we can enjoy it.”

Fujita began designing the garden in 1998, introduced to the project by architect Bruce Kuwabara. Kuwabara was looking for a Japanese landscape architect to design the garden of the newly purchased JCCC building. Kuwabara and KPMB Architects were behind the redesigns and renovations of the new building.

The new JCCC building was originally an office and plant occupied by legal and accounting publisher CCH Canadian. The loading dock was converted into the front entrance of the building, explains Fujita. While he saw challenges, he also saw potential when designing the garden. When the centre officially opened, Japanese Prince and Princess Hitachi were there for the ribbon-cutting ceremony in the garden on June 11, 1999. 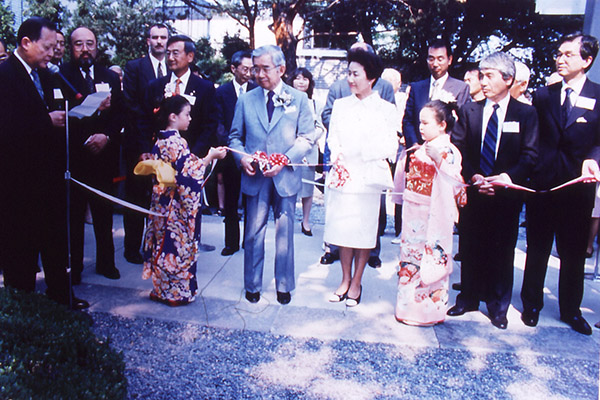 Japanese Prince and Princess Hitachi at the ribbon cutting in the garden of the new JCCC on June 11, 1999. Photo courtesy: Scott Fujita.

Fujita took over the garden’s maintenance two years after the centre opened when the garden’s original caretaker passed away. In 2007, Fujita asked his friend Ben Nishitoba to help, and over the next decade, they cared for the garden together.

Fujita has worked as a landscape designer his entire career. After immigrating to Canada in 1973, he worked for a Japanese garden construction company. Wanting to learn about North American landscape design, Fujita studied at Ryerson University.

Fujita was also part of the Sakura Committee, a group of volunteers promoting friendship between Japan and Canada by planting sakura trees in Ontario. During the 12 year project, the committee planted over 3,000 sakura trees across 58 locations in Ontario, like public parks, universities, and community centres, including the JCCC. During the reception commemorating the end of the project in 2012, Fujita was conferred a commendation by the Consul-General of Japan and Sakura Committee Chair, Eiji Yamamoto. 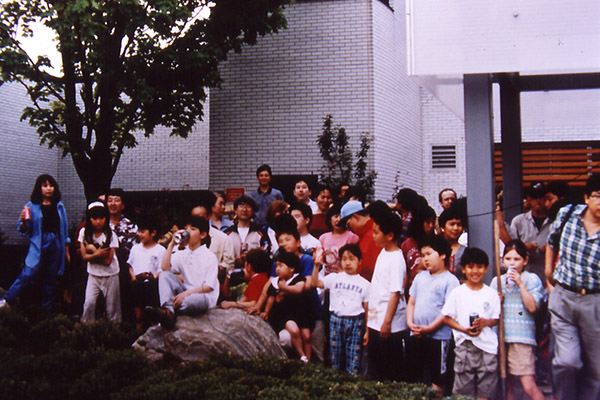 Around 50 children from three different Japanese-language schools planted 500 boxwood shrubs in the garden. Boxwood shrubs are dense and hearty evergreens, and many still grow in the garden today. Fujita hoped it would be a lasting way to bring the community together.

“Those kids are already grown up and are 35 or 40. They also have kids now, and so they bring their kids to kendo [and other activities at the centre],” he says.

Now 82, Fujita has passed the torch to the Toronto Japanese Garden Club. During the pandemic, Fujita offered advice and design tips for the garden over the phone and by email. During the dedication ceremony, the garden club and Fujita reunited in person, for the first time since the pandemic. After the ceremony, the group got to work on the garden, with Fujita there to answer questions and offer advice. 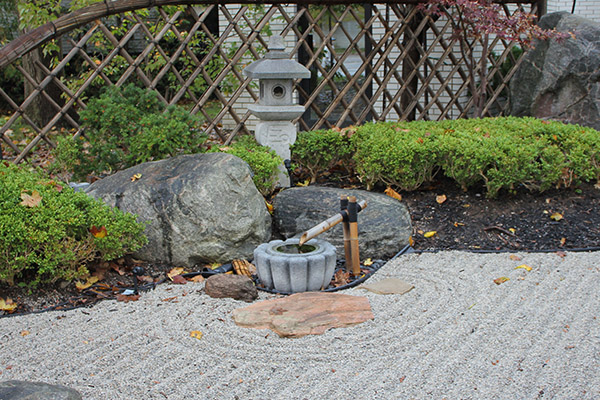 The tsukubai installed near the entrance of the JCCC. Photo credit: Cary Rothbart.

Along with the plaque, which includes a haiku written by Toronto Japanese Garden Club president Irene Foulkes, the centre installed a tsukubai last summer. A tsukubai is a stone water basin, a feature in many Japanese gardens, meant to supply water for cleansing and in a tea ceremony, explained Foulkes.

With elements and features of traditional Japanese gardens, Fujita hopes people who visit the JCCC and see the garden feel a sense of Japanese culture while being in Canada.