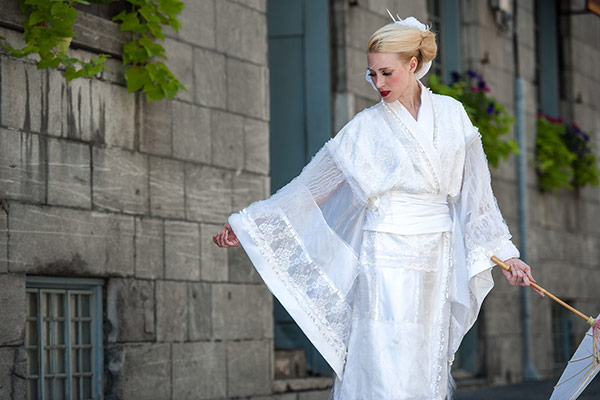 Liisa Savinov-Mountain has worn a kimono at a variety of events, but says she was concerned about showing respect to Japan’s culture. Photo by Susan Paige.

Curators at the Museum of Fine Arts in Boston never expected to be running for the hills when the museum unveiled its new attraction “Kimono Wednesdays”.

Visitors at the exhibit were given the chance to pose beside Claude Monet’s Impressionist oil painting La Japonaise while wearing full kimono.

Outrage at the exhibition soon followed with protesters citing its lack of cultural sensitivity.

“The MFA is all about cultural experiences,” reads one of the signs held by a protester. “Try on the kimono [and] learn what it’s like to be a racist Imperialist today!”

“It’s not racist if you look cute / exotic in it. Besides, the MFA supports this,” reads another sign.

After the protests, the MFA closed the exhibition and issued an apology.

Some protesters said that the museum could have avoided the controversy had they simply employed models to wear the kimonos instead of inviting the general public to wear them without any of the historical context made available to them.

“When the MFA’s painting, La Japonaise by Claude Monet, travelled throughout Japan for an exhibition, historically accurate reproduction kimonos were made for visitors to try on,” reads the apology.

“When the painting returned to Boston and a similar program was introduced at the MFA, we heard concerns from some members of our community, and as a result, we’ve decided to change our programming.”

The apology also states that the museum will endeavour to introduce more talks on Japonisme, a term used to describe the Japanese influence on European art.

There were some who supported the museum’s exhibition like Ikuko Burns, 79, who told the Boston Globe that she was disappointed by the protesters and chalked their protest up to their youth.

Burns has lived in Boston for 53 years and taught introductory lessons on Japan by bringing kimonos to local schools for kids to try on.

The controversy has sparked a much deeper conversation about the kimono.

Liisa Savinov-Mountain is an Ottawa-based model and has participated in a number of events that involved wearing a kimono.

One of her first events was at the Pointe-à-Callière Museum of Archaeology and History in Montreal.

The exhibition involved 20 models of varying ethnicity with kimonos on loan from the Japanese consulate and items from designer Anne De Shalla.

“At first I was admittedly concerned about wearing the kimono in respect to the culture, although all models were non-Asians selected for the show,” Savinov-Mountain said in an interview with Nikkei Voice.

“In fashion modeling, you are expected to wear a wide range of clothing. I have worn clothing for shows by designers that were inspired by different cultures and, of course, have been in attendance to shows where we have worn traditional garb,” Savinov-Mountain said.

One of the events she’s taken part in was the Kimono Fashion show at Otakuthon, an annual convention held in Montreal to celebrate anime, manga, and various aspects of Japanese culture.

And while she was there, she was introduced to an entirely different side of Japanese culture.

A big part of those conventions are often the cosplayers who wear costumes to look like their favourite characters.

People who cosplay almost always do it to show their appreciation for the characters, so could the same be said for the people who dressed up in front of the Monet painting?

Savinov-Mountain feels that the Boston museum did not intended the kimono event to be insensitive, but says a nuanced understanding of the history of the kimono should have been on display as part of the program.

“It certainly is important to understand a culture before stepping into its shoes,” Savinov-Mountain said. “But sometimes if one does not have the chance to learn, embracing through experience like these is part of the discovery.”

To wear or not to wear a kimono is the question, and many are still looking for an answer.


Well, the lady in the photo messed up! Pulling right over left means that you are dead!