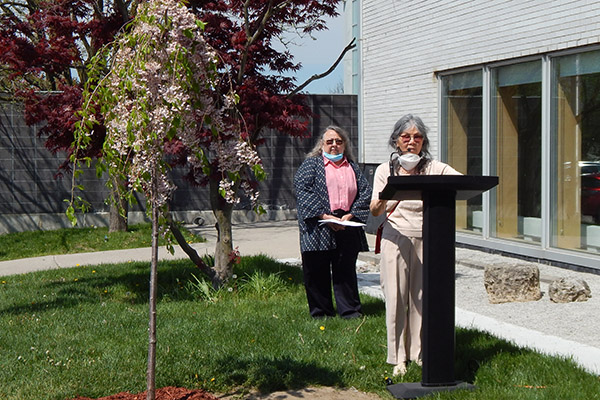 
Chris Kurata and Irene Foulkes of the Toronto Japanese Garden Club speaking during the dedication next to the newly planted weeping cherry tree on May 15. Photo credit: Kelly Fleck.

TORONTO — In 1952, a group of Toronto Buddhist Church members gathered with the idea to start a garden club. The club would be a way to preserve and share traditional Japanese arts like ikebana, cultivating morning glories and chrysanthemums, landscape gardening, and bonsai. But the club also had a bold vision, introduce Toronto to the rich Japanese culture, and through that, the newly settled Japanese Canadian community, who were exiled from B.C. after the Second World War.

This meeting was the beginning of the Toronto Japanese Garden Club, which celebrated its 70th anniversary with a bento luncheon at the Japanese Canadian Cultural Centre on May 15. The day was also celebrated with the planting of a shidarezakura or weeping cherry tree, honouring the founding members, as well as, past and current members who are survivors of the internment era. 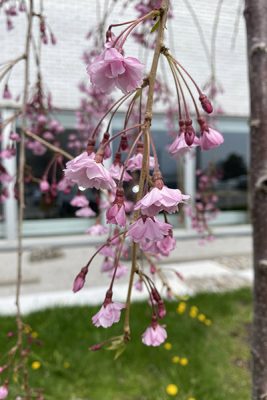 A close up of the shidarezakura or weeping cherry blossom in bloom.

In the 1950s, Toronto was not the multicultural hub it is today, explains Foulkes. There were only a few Chinese and Italian restaurants, no Greektown, Little India, or Koreatown, and the Japanese Canadian Cultural Centre would not open until a decade later. Few Canadians had ever heard of ikebana or bonsai.

“The atmosphere [in Toronto] wasn’t exactly welcoming, and in some cases hostile. And so it was brave to try to present Japanese culture when Japanese culture wasn’t truly appreciated or known,” Foulkes tells Nikkei Voice. “I think the garden club was quite instrumental in opening doors and perhaps, opening minds.”

The club held its first show at Canadian Legion Hall in October 1953. The club showcased Japanese culture, such as ikebana and chrysanthemum displays, embroidery, and kimono-clad dolls, the show was a huge success, drawing in over 600 people.

The club continued to grow, hosting a show at the CNE in 1954, inviting an ikebana teacher from Japan; meanwhile continuing its regular activities, such as meetings, garden tours, and classes. Over its 70 years, club members have been involved in various projects to enhance the city, often quietly and without expecting recognition, says Foulkes.

Projects like consulting on the sakura tree planting in High Park, the former Japanese rooftop garden atop the University of Toronto’s OISE building, and the garden at the Japanese Canadian Cultural Centre, along with, consulting and designing various private and public gardens across Toronto and the GTA.

“Through art and nature—because these are aspects of Japanese culture that I think are universally respected and admired—it was a way of reaching out to people,” says Foulkes.

Foulkes joined the garden club through her involvement with ikebana and the Toronto chapter of Ikebana International. A master of ikenobo, a school of ikebana, Foulkes first took a class through the garden club, taught by Sachi Kawaguchi at the Buddhist church in 1964.

When the garden club was researching its history for the anniversary celebrations, Foulkes realized her roots linked to the club’s beginnings. Her aunt, Sakae Ogaki (nee Goto), and uncle, Tak Yoshida, were among the club’s founding members. Her uncle Tak chaired one of the club’s early meetings, determining its constitution, and her aunt Sakae taught the first ikebana classes out of her home. Sakae passed away earlier this year, but Foulkes had the chance to hear her stories of the club’s early days. 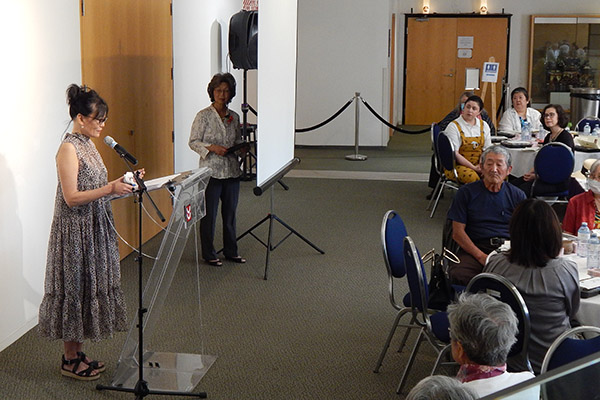 Award-winning author Kerri Sakamoto was the guest speaker at the luncheon.

During the club’s platinum celebration, they presented chrysanthemums to founders’ families, hoping they could also feel a connection to the club’s origins, says Foulkes. To host the 70th anniversary, the club applied for and received a grant from the Japanese Canadian Survivors Health & Wellness Fund. The celebrations included a bento lunch, ikebana and bonsai displays, a presentation on the club’s history, and a speech by award-winning novelist Kerri Sakamoto. The event was free for members who were survivors of the internment era.

“We wanted this luncheon to celebrate not just the survivors but the founding members, who coincidentally were all survivors, except John Bradshaw [former Toronto Star garden editor and honorary club president and advisor]. Throughout the club’s history, all of the presidents have been survivors, including myself,” says Foulkes.

The celebrations began with a dedication for the newly planted weeping cherry tree, honouring the roots the founders planted in Toronto through the garden club. A weeping cherry tree felt like the perfect symbol, says Foulkes. Sakura have always been a symbol of Japan. But they are also a reminder of life’s impermanence. The blossoms are beautiful but only last a few days before they fall, a reminder to enjoy our lives while we can. 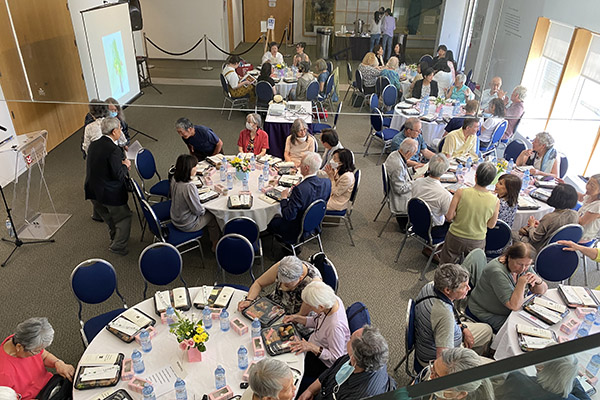 “With sakura, there is always the aspect of bittersweetness because the blossoms are so short-lived. With the weeping aspect of the tree, there’s a slight connotation of sadness too. But for me, I don’t think of it as sadness, as much as, [the branches] embracing like arms, enfolding and protecting,” says Foulkes. “I’m hoping the tree will grow and be a symbol of the Toronto Japanese Garden Club for years to come and for everyone to enjoy it. It’s the embodiment of our motto, for the betterment of our community through the advancement of art and culture.”

Today, the garden club continues to be driven by that original motto. The club hosts annual garden shows, plant sales, and classes. At the club’s annual summer show in August, they always include a cultural table, highlighting a different part of Japanese culture, like table settings and dishware, woodblock prints, everyday kimono, and more. The club also took on stewardship of the gardens at the JCCC when volunteer Scott Fujita, who tirelessly and quietly cared for the gardens for decades, retired. Foulkes hopes to see the club continue to flourish from the roots planted by the founders 70 years ago and encourages anyone interested to join.

“I want the younger generation to come out and start taking over and also be proud of their heritage,” says Foulkes. “Don’t be afraid that you don’t know how or you’re not a gardener, that’s not a part of it. You learn as you go. Especially at our volunteer sessions at the JCCC, I always say that we’re all amateurs. We’re teaching each other. We just have fun and enjoy getting out in the fresh air.”

To more about the Toronto Japanese Garden Club and club membership here.