Victory against nuclear weapons in Toronto 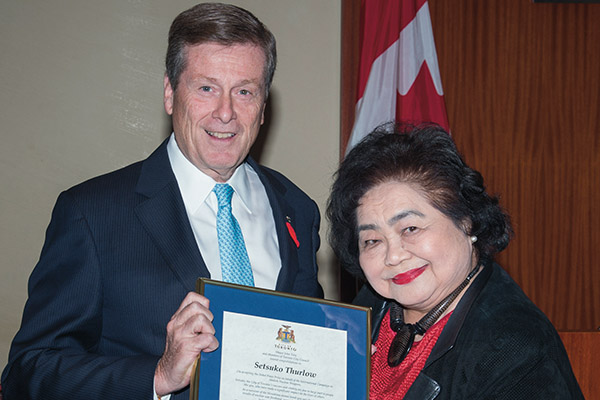 TORONTO — The Toronto Board of Health voted unanimously to support the city council’s reaffirmation of Toronto as a nuclear weapons-free zone after a public hearing on the dangers of nuclear weapons and radiation fallout on April 16.

The 13-member board also voted “that city council and the Board of Health request the Government of Canada to sign the United Nations Treaty on the prohibition of nuclear weapons.”

The Board of Health hearing came at the request of Toronto City Council which honoured Ms. Thurlow in November for her peace activism in the global nuclear weapons abolition movement. Ms. Thurlow reminded the public hearing that the atom bomb which destroyed Hiroshima was fuelled by uranium from Great Bear Lake in the Northwest Territories and refined in Port Hope, Ont.

“Thus, my beloved city of Hiroshima was wiped from the face of the earth with the heat of 4,000 degrees Celsius,” said Ms. Thurlow.

She urged the board to recommend the city accept an ongoing responsibility to deal with the issue of nuclear weapons and nuclear war, that the city participate actively in “Mayors for Peace,” an international organization formed by the mayor of Hiroshima. As well that city council urge the federal government to sign the UN Treaty on the Prohibition of Nuclear Weapons. Ms. Thurlow accepted the Nobel Peace Prize on behalf of the International Campaign to Abolish Nuclear Weapons in Oslo, Norway in December. 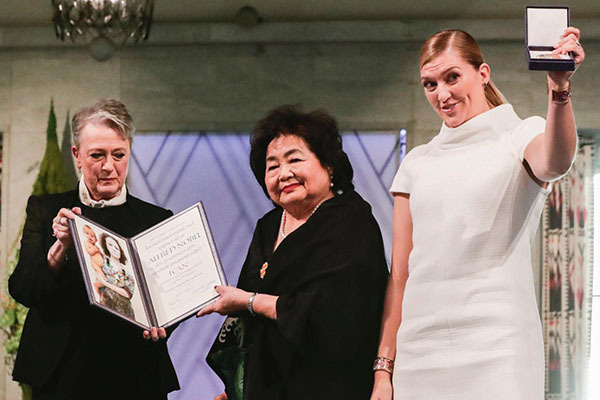 The push has been supported by organizations and institutions across Toronto, the GTA and Canada. Project Ploughshares, the Canadian Coalition for Nuclear Responsibility, Durham Nuclear Awareness, Ryerson University, Greenpeace, Peace Magazine, the Provincial Council of Women of Ontario, Les Artistes pour la paix in Quebec, and the Canadian Red Cross submitted written statements to the Board of Health. Two dozen individuals, including Douglas Roche, Canada’s former Ambassador for Disarmament, also sent written texts.

“There is no room for nuclear weapons here on earth,” Sid Ikeda, former president of the Japanese Canadian Cultural Centre, submitted. “The sooner we abolish them the safer we will be.” 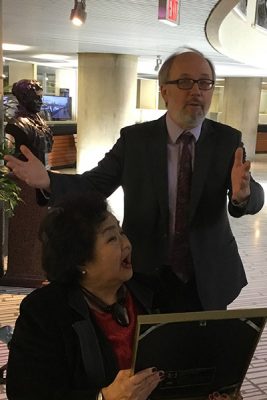 Setsuko Thurlow and chair of the Toronto Health Board, Joe Mihevc, after the public hearing at Toronto City Hall on April 16. Photo credit: Anton Wagner.

Taro Shibahara, a retired professor from Fukushima University, described his and his family’s experiences following the atomic bombing of Nagasaki at the public hearing.

“We must end the use of any and all forms of nuclear weapons, as they increase the risk of accidental or even deliberate nuclear holocaust around the globe, and the end of all life as we know it,” Shibahara wrote to the board.

Presenter Zach Ruiter urged that the board to investigate the purchase of the General Electric-Hitachi uranium pellet plant in Lansdowne by the U.S. based nuclear weapons manufacturer BWX Technologies. The board agreed to further investigate the health consequences of the Lansdowne plant.

All of the presentations before the board were videotaped and can be viewed at on the city of Toronto’s website here.

After the unanimous approval of his motion, Councillor Joe Mihevc, chair of the board, expressed the hope that his motion would encourage other city councils to pressure the federal government to ratify the Treaty on the Prohibition of Nuclear Weapons.

His motion then went back to Toronto city council. City Council approved Mihevc’s motion on April 24.

The entirety of the Board of Health public meeting were recorded and can be watched below. Ms. Thurlow’s remarks begin at the 14:12 mark.