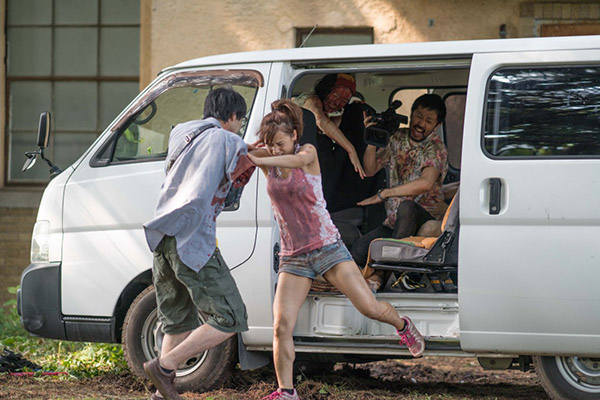 
One Cut of the Dead will have it’s Toronto premiere on Thursday, Nov. 15 at 7pm at the Japanese Canadian Cultural Centre, in Japanese with English subtitles. Photos courtesy: Reel Asian.

In Japan, the low-budget indie film, One Cut of the Dead, was a phenomenon.

Made by relatively unknown director, Shinichiro Ueda, with an unknown cast, including many non-professionals, it opened in two tiny theatres in Japan. Entirely through positive word of mouth the film took off. Tickets were impossible to get and eventually this “little film that could” found itself at the top of the Japanese box-office.

At the most recent Toronto Japanese Film Festival, two visiting A-list directors asked if we had seen the film and recommended it highly. We can heartily echo that recommendation.

The structure is reminiscent of Michael Frayne’s hit comedy, Noises Off, which opened in London’s West End in 1982. The first of its three acts was a typical British sex farce. The remainder of the play revisits that first act, but from back stage and we are treated to a riot of clashing egos, petty squabbling, technical disasters and general chaos. Take Noises Off, graft a grade-Z Japanese zombie movie and a heartfelt celebration of resourcefulness and the bonds of family, and you have a rare and joyous thing called One Cut of the Dead.

The first 35 minutes of the film present us with the final product: a marginally entertaining zombie flick, amazingly shot entirely in one long, single take.

A film crew enters an abandoned military test facility to make a zombie film, only to come under attack from actual zombies. The director decides to keep shooting and the requisite blood-soaked mayhem ensues.

It is an amateurish slice of undead pandemonium, punctuated by all manner of technical flubs, stilted dialogue and general randomness culminating, in a triumphant crane shot of the heroine standing in a bloody pentangle raising her gory axe. The final credits roll and then the film begins in earnest. 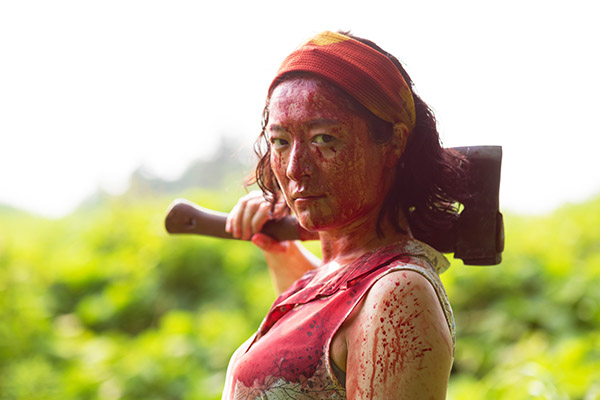 We find ourselves one month earlier as sad-sack karaoke director Higurashi (his motto: “I’m fast, cheap, but average”) is offered a once-in-a-lifetime chance: the near impossible task of making a live-to-air zombie movie in a single cut.

Returning home we meet his distracted, ex-actress wife and rebellious film-school daughter. We also meet his crew, which include a pop singer-turned-actress and a pompous lead actor convinced he is too good for the material.

Family and professional relations are strained and deteriorate as the broadcast date approaches but Higurashi soldiers on, driven by mild ambition and a kind of panicked inertia.

The film’s final section presents the actual filming of the movie we saw in the first act, and it is an ingeniously constructed symphony of clockwork hilarity and chaos: actors and crew arrive black-out drunk or suffering from explosive diarrhea, last second cast changes must be made and a vital piece of equipment is catastrophically damaged mid-shoot.

Ueda defines his characters nicely and economically in the second act and the repetition on the first injects the final mayhem with a clear spatial coherence.  It is an exhilarating and sophisticated piece of cinema brilliantly dressed up as shoddy DIY.

One Cut of the Dead is a laugh-out-loud hilarious and a gleefully heartfelt reminder of why we love movies and the resourceful spirit of low-budget film making. It is unmissable but be warned: that big goofy grin on your face as you leave the theatre may be permanent.

Portions of this review are a reprint of an article published earlier in BENTO BOX magazine.