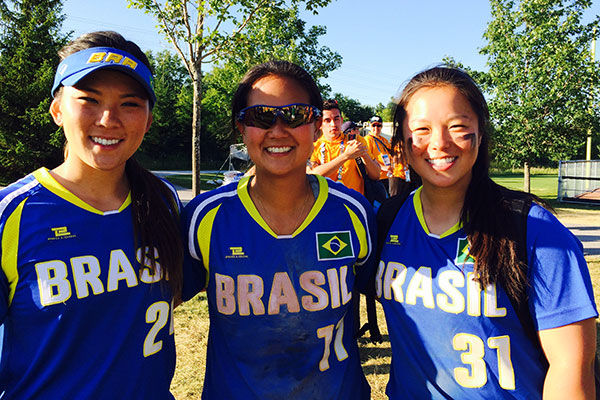 TORONTO – Visiting the PanAm games in Toronto this summer provided some great entertainment, but none more interesting than seeing Brazilian Sanseis playing prominent roles for their country.

The biggest surprise was on the baseball diamond where the Brazilian national womens’ team was entered to play in the very competitive softball division against the elite teams from Canada and the United States.

It’s called softball for official purposes, but around these parts it’s known as fastball because pitchers can wing the ball across the plate at speeds of 55 to 60 miles per hour from just 46 feet away.

The Brazilians wound up in the top four, making it to the semi-finals with a team made of nine Japanese Brazilians on a roster of 15.  That’s 60 per cent of the team.

I emphasize this because I had never heard of baseball or softball being popular in Brazil. I have two children who were brought up there, and visiting them over the years I found no one who knew about the game.

Their sport is soccer, as most everyone knows.  It’s so popular that kids there play street soccer, like kids in Canada play street hockey.

It turns out the Brazilian women took to the game, despite the fact there are no leagues or teams in the country. They get to play tournaments with a rep or travel team occasionally.

Shortstop Simone Suetsugu says 12 of the 15 members on the Brazilian squad played fastball at US colleges. Suetsugu gave herself as an example. She says after high school in São Paulo she played for Miami Dade College in Florida then transferred to play for Division 1 University of Tennessee.

Catcher Veronica Fukunishi is her team-mate at Tennessee. Suetsugu stands only about 5’3”, like most of her Nikkei team-mates, compared to players from Canada, the US and South American teams, who average 5’6” to 6 feet.  But they’re equal or better than most in fielding skills and smart base running.

The areas they’re lacking in are size and power.  They reminded me of the pre-war Vancouver Asahi team. In the game, I saw the Brazilians out hit the Dominican Republic 11 to 2.  The DR had gone ahead 1-0 in the first inning on a home run.

But the Brazilians kept chipping away with singles until they hustled across the winning run in the 10th inning for a thrilling 2-1 win.

In the end, the Brazilians never made it to the medal round.  Canada won the gold in a big upset over the US.

Elsewhere, Brazilians were well represented in table tennis with Sanseis, again, playing key roles.  Gustavo Tsuboi, ranked 35th in the world, got a silver medal in an upset loss to team-mate Hugo Calderano.