Brig-Gen Moritsugu appointed Officer of the Order of Military Merit 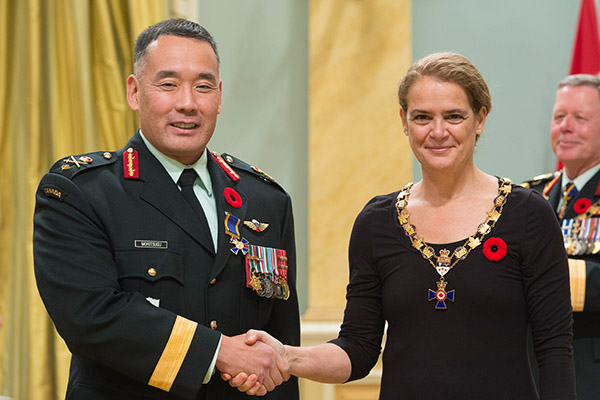 OTTAWA — On Friday, Nov. 10, Brigadier-General Steven Moritsugu was presented with the insignia of Officer of the Order of Military Merit (OMM) at the investiture ceremony held at the Governor-General’s residence in Ottawa, Rideau Hall.

Her Excellency the Right Honourable Julie Payette, Governor-General and Commander-in-Chief of Canada invested two Commanders, seven Officers and 36 Members into the Order of Military Merit.

Created in 1972, the Order of Military Merit recognizes meritorious service and devotion to duty by members of the Canadian Armed Forces.

The Order honours them for their commitment to Canada, according to the following three levels of membership: Commander (CMM), Officer (OMM) and Member (MMM).

At the time of his appointment, Moritsugu held the rank of Colonel and was being recognized for his outstanding meritorious service in duties of responsibility.

The July 2016 issue of Nikkei Voice included a profile of Moritsugu upon his promotion to Brigadier-General.

This Order ranks second, after the Order of Canada, among awards bestowed by the Governor-General, to recognize achievements by Canadians, other than in the field of battle. About 1/10 of 1 per cent of military personnel can be inducted in any year.

Chief of Defence Staff, General Jonathan Vance, hosted a reception for the new Members of the Order as well as their guests the evening prior to the investiture ceremony.

Moritsugu’s daughter, Sarah, and his parents, Nancy and Ted Moritsugu, attended both events. Moritsugu and Vance have known each other since they attended Royal Roads Military College in Victoria, B.C.


Hey there just wanted to give you a quick heads up and let you know a few of the pictures aren’t loading properly. I’m not sure why but I think its a linking issue. I’ve tried it in two different browsers and both show the same outcome.


Steve was my CWO at 778 sqn, Air Cadets before joining the Forces He retired from active duty 2 years ago now. Wicked sharp and funnier than hell. Professional to the core. A leader.