Canadians sail across the Pacific in an adventure of a lifetime 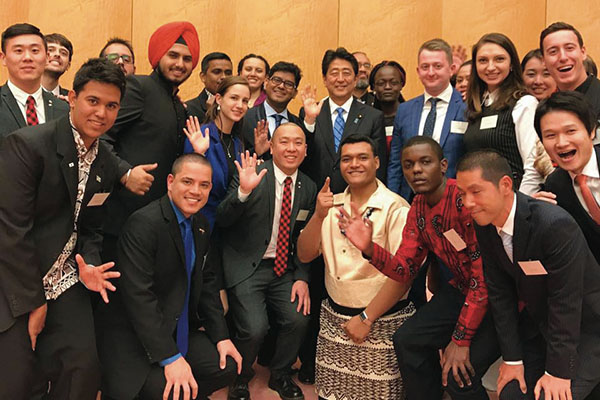 Twelve Canadian youth sail the Pacific Ocean on a leadership program organized by the Japanese government, along with 240 international and Japanese youth. Photo courtesy Kevin Kobayashi.

TOKYO – Twenty-six year-old Kevin Kobayashi and 19 year-old Sareema Husain embarked on the adventure of a lifetime on Jan. 17.

The two, along with 10 other Canadian youth will be representing Canada on a ship travelling across the Pacific Ocean in a project called Ship for World Youth (SWY), run by the Government of Japan’s ministry of foreign affairs. It brings together 120 Japanese youth, between the ages of 18 to 30, with  120 international youth from 10 different countries.

An international, cross-cultural exchange program, SWY is meant to bring the world’s youth together, where they can network and build leadership and management skills. Participants discuss global issues in an increasingly globalized world.

“The entire program is a safe venue for everybody to exchange points of views on some tough world topics,” says Kevin Kobayashi. “They’re hoping that through the program they can bridge the gaps between international countries and also kind of have a way to have global harmony and global peace.”

The program, which is currently embarking on its 29th voyage, first set sail in 1989. Each year, the Japanese government invites 10 countries to board the ship, and the countries vary year to year. Each country chooses its participants. This will be Canada’s 13th time participating in the project, travelling alongside youth from Ukraine, Costa Rica, Brazil, India, Tonga, Kenya, Egypt, Fiji and New Zealand.

During their five weeks at sea, participants will take part in expert-led seminars, discussion groups, cultural exchanges as well as national celebrations, hosted by each of the participating countries.

“In true Japanese style, pretty much every second of our entire trip is planned out,” Kobayashi laughs. 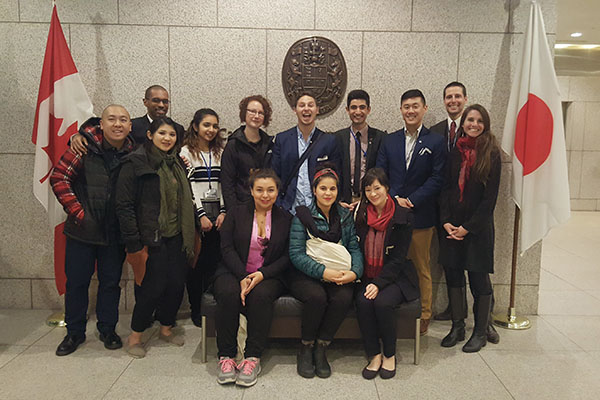 As well each country is expected to do a national presentation, to teach the rest of the participants about the culture, heritage and history of their country.

It’s a task that is easier said than done, says Sareema Husain. “Finding a way to educate and make [the presentation] entertaining, but also easy to digest, and Canada is such a complex country because there are all these different parts of it,” says Husain.

Husain and Kobayashi are from Richmond Hill and Toronto, but their group members come from all over the country, from Vancouver to Montreal, Saskatchewan to Charlottetown and Iqaluit. Each part of Canada has its own distinct flavour, and it was a challenge to boil that down to a short presentation, says Husain.

“I never really thought about what it means to be Canadian, I’m a first generation Canadian, so I have that typical story of immigrant parents,” says Husain.

Husain’s parents emigrated from Pakistan in the 1990s while Kobayashi is a yonsei, and his great-grandparents emigrated from Japan nearly a hundred years earlier around the 1890s. The ten other Canadian delegates come not only from all over Canada, but they all come from a variety of cultural backgrounds. Aside from Husain and Kobayashi, the group includes; Inuit, hapa, Romanian and French-Canadian heritages to name a few.

“I think just combining that and showing that every person, though very different, is also very Canadian, that can be very difficult to wrap your head around if you’re born and raised in a country like Japan,” adds Kobayashi. “When you have so many people that visually look mix-matched, but at the end of the day we are all very much from the same place, I think that’s difficult to put into words and a presentation.”

The group starts their trip by flying to Tokyo on Jan. 17. From there, the 10 participating countries will homestay in five different Japanese cities. The Canadian delegation will stay in the city of Fukui. During their stay in Japan, selected delegates from each country will have the opportunity to meet with Japan’s Prime Minister Shinzo Abe and Japan’s Crown Prince Naruhito.

As the assistant national leader for the Canadian delegation, Kobayashi, along with the national leader, Henry Tsang from Montreal, will meet the prime minister.

“I think it’s such an honour to not only to be able to be in his presence, to get the opportunity to thank him for being such a global leader and to sticking for something he believes in,” says Kobayashi. 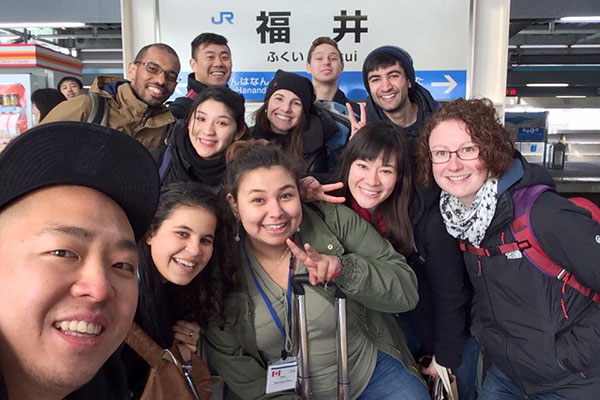 The 12 Canadian delegates during their travels in Japan. Photo courtesy Kevin Kobayashi.

The Canadian group’s other assistant leader, Stephanie Shyluk from Saskatoon, with Tsang, will meet the Crown Prince.

After their time in Fukui, the participants board the ship, called the Nippon Maru, in Yokohama. They will spend 5 weeks on the ship, making stops in Vanuatu, Solomon Islands, Fiji and New Zealand. The participants will return to the Yokohama port on Mar. 3 where they will fly back to Canada.

The program is an opportunity for Japanese youth to meet and hear the perspectives of youth from around the world, an opportunity that many do not get, coming from a homogeneous country, says Kobayashi, who taught English in Japan for three years.

“I think in Canada we know so many people who have come from all over and go all over and the fact of the matter is that not all countries get the opportunity to do that, so SWY is an excellent venue for people to not only explore the world but to gain different perspectives, and to gain insight into what other people are thinking and why,” Kobayashi.

“It gives you a sense of what you can do, and what effects and change you make in the world,” says Husain.