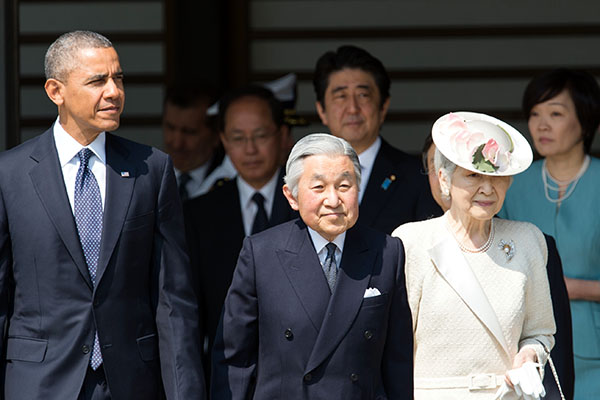 
In a rare video statement, Emperor Akihito spoke candidly about his declining health, hinting his wish to step down as emperor. What will this mean for the future of monarchy in Japan? Photo courtesy: U.S. State Department Flickr.

TOKYO- In a video address released on Aug. 8, 2016 Japanese Emperor Akihito addresses his declining health, hinting his wish to step down from the throne.

“Even under such circumstances, it is my hope that by thoroughly reflecting on our country’s long history of emperors, the Imperial family can continue to be with the people at all times and can work together with the people to build the future of our country, and that the duties of the Emperor as the symbol of the State can continue steadily without a break. With this earnest wish, I have decided to make my thoughts known,” said the 82 year-old emperor.

Akihito assumed the throne in 1989 and should he step down, he would pass on his duties to the next in line, his eldest son, Crown Prince Naruhito.

Not since Emperor Kokaku in 1817 has a Japanese emperor abdicated their duties while alive. However, before the Meiji Restoration (1868- 1912) abdication was quite common. In fact, it was more common for emperors to renounce the throne than die upon it. Countless Japanese emperors gave up their throne for reasons such as age, health, or merely the stress of the job.

In his book Splendid Monarchy, University of Toronto professor Takashi Fujutani, argues that the current role of the emperor is actually a lot less “traditional” than one would assume.

“This emperor was a product of the late nineteenth and early twentieth centuries,” he writes. “Throughout most of history, the life of the people had little to do with the emperor.”

Everything changed during the reign of Emperor Meiji from 1868-1912. Also known as the Meiji restoration, this time saw significant political change, including changes to the laws surrounding the monarchy’s role in society. These new laws did not include provisions for abdication. All emperors since have died on the throne and the current Imperial Household law would have to be changed in order for Akihito to abdicate.

It is much more uncommon for the Pope to resign, and yet that is what 85 year-old Pope Benedict XVI did in in 2013, to due to old age. Benedict was the first Pope to abdicate by choice since Pope Celestine V in 1294, who only served as Pope for five months.

In Europe, it is much more common for imperial rulers to renounce the throne.

In 2013, Queen Beatrix of the Netherlands gave up her throne at age 75. She was crowned in 1980, after her mother abdicated. Beatrix is the third Dutch queen to step down since World War II.

In the same vein as Akihito’s televised address, Juan Carlos, the King of Spain announced that he wished to abdicate the throne in 2014 at the age of 76. “A new generation must be at the forefront… younger people with new energies,” the Spanish king said in the televised address.

Since the Meiji period, the Japanese emperor has served as both the head of state and the highest authority of Shinto religion. Previously, the emperor took on a predominantly religious role.

After the American occupation of Japan in World War II, new laws were put in place that further changed the role of the emperor, starting with Akihito’s father, Hirohito. According to Alexis Dudden, a Japanese history expert at the University of Conneticut, American occupation, much like the Meiji period, completely changed Japanese society and the role of the emperor within it.

“A decision was made to reorganize Japanese society,” she said. “Critically the emperor was no longer a god and would therefore be accountable as a human being and could live as a human being.”

“A decision was made to reorganize Japanese society,” she said. “Critically the emperor was no longer a god and would therefore be accountable as a human being and could live as a human being.”

In his New Year’s Day rescript in 1946, Emperor Hirohito, Akihito’s father, famously renounced his divinity, and publicly established himself as a human being. 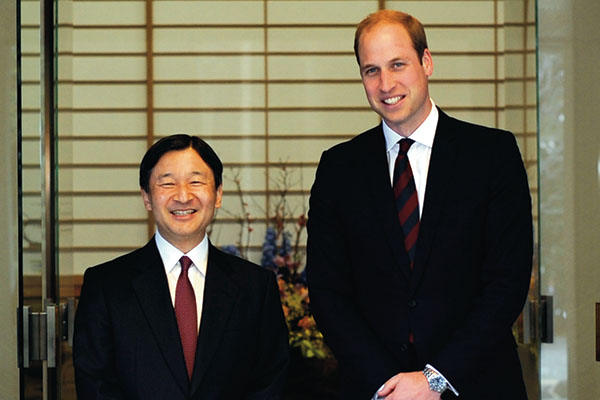 Should Akihito step down, he would pass on his duties to the next in line, his eldest son, Crown Prince Naruhito, pictured here with Prince William. Photo courtesy: Wikimedia Commons.

However, abdication is not mentioned in the 1947 Imperial Household Law, which still stands as law in Japan today. Therefore the laws would have to be rewritten to allow Akihito to do so. Since the Imperial Household Law, the emperor has been “the symbol of the state and of the unity of the people,” with a similar figurehead role as the Queen of England.

Satoru Yamamoto, a former senior official at the Imperial Household Agency, once said in 1984 that emperors are not allowed to abdicate under Imperial House Law because the law works to “stabilize the status of the emperor.”

Although the Imperial Household Law currently does not allow for Akihito to step down, a Kyodo News survey found that 85 per cent of Japanese people believe that the emperor, who has had recently had heart surgery and prostate cancer, should be able to abdicate.

According to Dudden, prior to the mid-nineteenth century, very few emperors lived into their 40s.  Japan now has the highest life expectancy rate in the world, the World Health Organization found that the average Japanese citizen in 2015 will live to 83.7 years-old.

Devin Stewart, an expert on contemporary Japanese society at the Carnegie Council for Ethics in International Affairs, spent four years living in Japan, conducting interviews with over 200 citizens to learn what their socio-political beliefs and priorities are. Stewart says that longer working lives have put a significant amount of stress on Japanese people, including Emperor Akihito.

“One of the biggest preoccupations among Japanese citizens, especially adults of working age, is striking a more reasonable work-life balance,” Stewart tells Nikkei Voice in a phone interview.  “This relates directly to the topic of the emperor being able to abdicate because he’s an old man who is looking for a work-life balance. It’s not a coincidence.”

“He’s working very hard for a man his age. On the one hand, we should take his statements at face value. He’s saying ‘I’m old, I’m tired,’ he’s not saying ‘I’d like to play golf.’ He’s saying ‘I really can’t do this schedule that is expected of me.'”

“Retiring with dignity is one of the other expressions I’ve heard over and over again in my interviews,” he says.

Dudden asserts that Akihito has a very “nine to five, businessman-like job,” when compared to his father Hirohito. “He’s working very hard for a man his age. On the one hand, we should take his statements at face value. He’s saying ‘I’m old, I’m tired,’ he’s not saying ‘I’d like to play golf.’ He’s saying ‘I really can’t do this schedule that is expected of me.'”

“It is, for a man his age, a rigorous schedule. He’s had operations, he has health issues and yet there are other dimensions to what he’s doing, I think. He is emphasizing very strongly his actual existence as a human being,” she says.

In a press conference on Aug. 8, the same day that Akihito released the video, Prime Minister Abe addressed the emperor’s statement. “I would like to take seriously the fact that the emperor addressed the nation,” he said. “Given the age of the emperor and the burden of his duties, I believe we need to think what grievance it causes him and what we can do.”

Prime Minister Shinzo Abe and his Liberal Democratic Party want to change the constitution to change the role of the emperor from a shōchō or “symbol” to the genshu “sovereign head.”

In Akihito’s video address, he referred to himself as a “symbol of the state,” at least seven times, which further solidifies what he truly believes the role of the emperor should be in Japanese society.

“I think that this whole emperor story is a reflection of big, broader changes happening in society and demographics,” says Stewart.


[…] The group starts their trip by flying to Tokyo on Jan. 17. From there, the 10 participating countries will homestay in five different Japanese cities. The Canadian delegation will stay in the city of Fukui. During their stay in Japan, selected delegates from each country will have the opportunity to meet with Japan’s Prime Minister Shinzo Abe and Japan’s Crown Prince Naruhito. […]


But when Hesei ends what will the new Age be called?

How is the name of each Age decided?


But when Hesei ends what will the new Age be called?

How is the name of each Age determined?


How long is his leadership period?