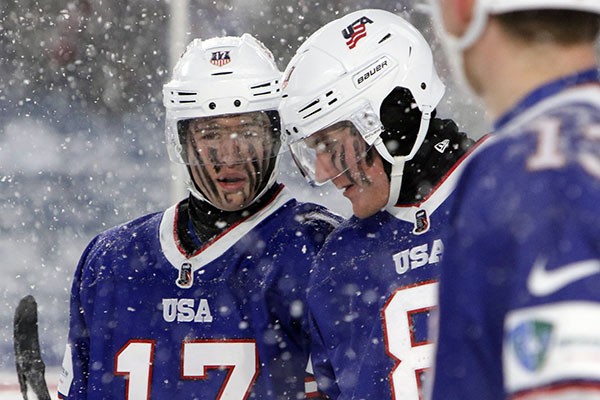 Over 44,000 roaring fans filled the seats at New Era Field in Buffalo, N.Y. to watch the World Junior Championships.

It was a preliminary game, but a much anticipated rematch from last year’s Gold medal game in Montreal where Team USA beat Team Canada in shootout.

With sub-zero temperatures and a snow flurry as thick as fog, fans excitement and team rivalries heated up the stadium. 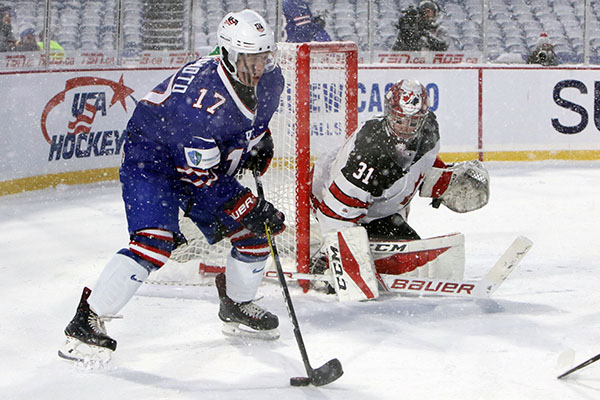 On Team USA was Edmonton Oiler’s first round pick in 2017 and Gosei, Kailer Yamamoto. At 19 years-old, Kailer is already a veteran of international play, having three competitions already under his belt including silver at the 2015 Under-17 World Championship, 2015 Under-18 Ivan Hlinka Memorial Tournament (where he was tied for top scorer) and bronze at the 2016 Under-18 World Championships.

With camouflage paint striped down his face, skilled forward Yamamoto was ready for battle.

At every commercial break, volunteers would help remove the constantly falling snow with shovels, wheel barrels and garbage cans.

Between periods, the Zamboni would scrape, rather than flood, the ice as the water would freeze too quickly and lead to less than desirable ice conditions. 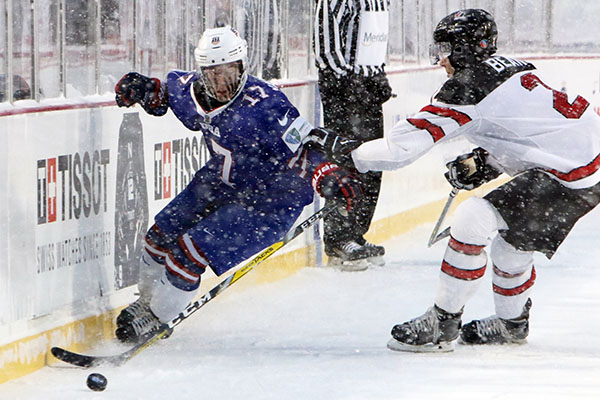 The second period would see Team USA get on the scoreboard with a power play goal of their own, but Canada would match it just over a minute later to maintain a two goal lead.

It wasn’t until the third period that the United States turned up the heat, scoring two goals in 34 seconds catching the Canadians on a mental lapse.

Overtime solved nothing and in the shootout, Team USA would complete the fairytale comeback out-scoring Canada 2-0 in the best of five.

Though Yamamoto didn’t factor in on the score sheet, he was on the ice for all three of the American goals and logged almost 22 minutes of ice time over 27 shifts.

Canada would eventually win the tournament over Sweden with a 3-1 victory, crowning their 17th gold medal, over four times more than any other team currently competing in the tournament. Team USA eventually took home the bronze beating the Czech Republic 9-3.