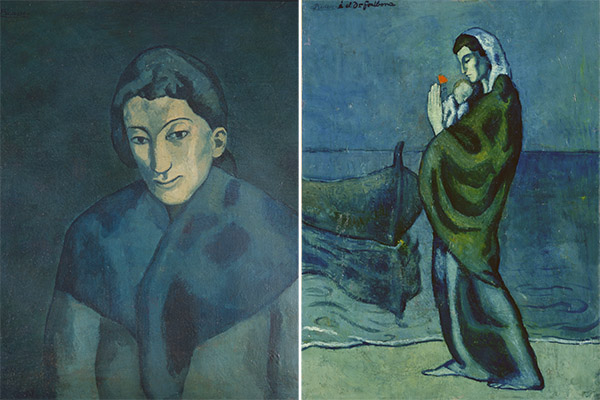 TORONTO — When entering Picasso: Painting the Blue Period at the Art Gallery of Ontario, it is easy to see where the exhibit gets its name. Recognized by Picasso’s dominating use of the colour Prussian Blue, the exhibit focuses on the early works of famous modernist painter Pablo Picasso, created between 1901 to 1903, called the Blue Period.

Characterized by Picasso’s socially and politically charged works, the Blue Period forces viewers to grapple with uncomfortable issues of poverty, labour unrest, and gender inequality. The exhibit explores how a young and hungry Picasso was inspired by, borrowed from, and transformed subject matter and motifs from his contemporaries and predecessors to develop his signature Blue Period style.

The exhibition gathered over 100 pieces, including 92 Picasso paintings, to prove this. These paintings include five rare and crucial Blue Period pieces from four Japanese institutions. The five loans travelled from the Hiroshima Museum of Art, Mie Prefectural Art Museum, Pola Museum of Art in Hakone, and the Asahi Beer Oyamazaki Villa Museum of Art in Kyoto. Running at the AGO until Jan. 16, Picasso: Painting the Blue Period, the exhibit was co-organized by the AGO and The Phillips Collection in Washington, D.C. 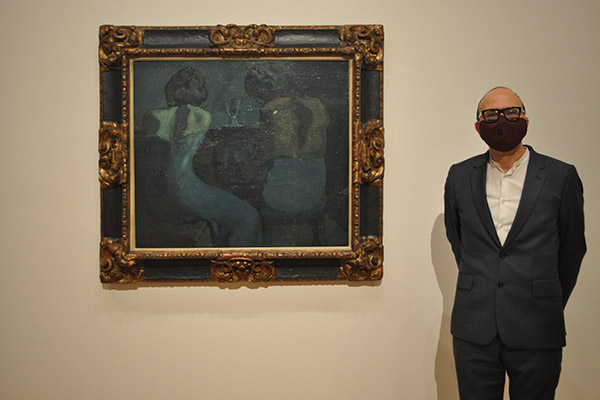 Picasso is one of the most thoroughly studied modern artists, so exhibit curators Kenneth Brummel of the AGO and Dr. Susan Behrends Frank of The Phillips Collection set out to re-examine the artist’s works in a new and innovative way—art conservation science. Art conservators used image spectrometry to x-ray paintings to reveal another image painted beneath. The AGO suspected its Picasso Blue Period painting, The Soup, may be hiding secrets underneath its surface for nearly 30 years. Visible even to the naked eye were colours that did not fit into the rest of the painting, peeking through small cracks in the top layer of paint.

The exhibit is framed around three paintings from the Blue Period in the AGO and The Phillips Collection and examines, through new information gleaned from the paintings below, how Picasso’s artwork transitioned and developed during the Blue Period.

“In this exhibition, we based our checklist on what we were able to uncover under these paintings, and we used a full battery of techniques to uncover the underlying compositions,” says Kenneth Brummel, associate curator of modern art at the AGO.

A defining feature of the Blue Period was Picasso’s stark reflections on the impoverished and marginalized of society as he travelled from Spain to France and back again. Towards the beginning of the Blue Period, Picasso visited the Saint-Lazare women’s prison and hospital in Paris. He met women arrested for being sex workers without permits or accused of spreading venereal diseases. Many women were pregnant when arrested and gave birth in the dirty hospital prison, explains Brummel. These women became the subjects of many of Picasso’s paintings in the Blue Period. 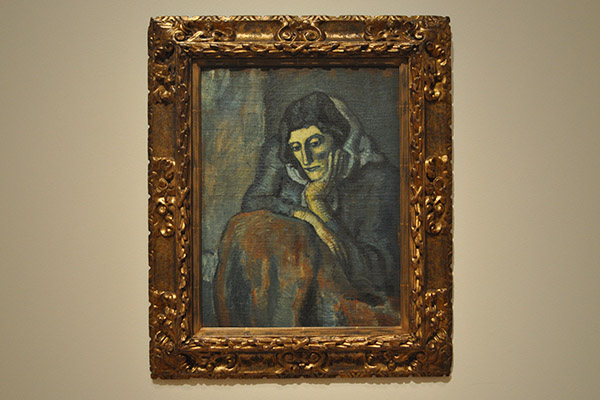 Picasso painted the women crouched over in humbling positions, shrouded in blue robes and shawls, and holding their swaddled children, likening them to the Virgin Mary. This imagery can be seen in pieces like Crouching Woman, on loan from the Asahi Beer Oyamazaki Villa Museum of Art.

“Picasso is likening a crouching beggar woman in the streets of Barcelona to a figure of melancholia, a thinker, a woman who is capable of thought and creativity. But also to a secularized Virgin Mary, who is worthy of your respect and devotion,” says Brummel. “He’s using form to communicate emotion and try to induce compassion and sympathy in you as a viewer for her. Of course, these works did not sell, and Picasso’s relationship with his agent became very strained.”

This painting is a particularly rare loan, the last time it was shown in public was 1936, explains Brummel. Crucial to telling the complete story of Picasso’s Blue Period was including the loans from the Japanese institutions, which fill in the gaps.

“These five Japanese loans were just so critical, not just because they are strong Blue Period works, but they [contextualize] our paintings,” says Brummel. 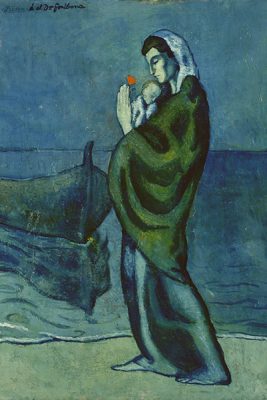 Five Japanese loans in one North American exhibit is very uncommon and was a result of goodwill, mutual trust, respect, and reciprocal work between Brummel and his Japanese colleagues. Brummel brokered a reciprocal loan arrangement with a fellow curator at the Aichi Prefectural Museum for Woman with Blue Shawl, lending out the AGO’s The Soup.

During multiple visits to Japan over the last seven years, Brummel worked closely with Keiko Imai of the Pola Museum of Art. Imai was looking to uncover the underlying composition in the painting, Woman and Child by the Sea.

Brummel arranged and travelled with scientist John Delaney, senior imaging scientist at the National Gallery of Art in Washington, to examine the painting from the Pola Museum. In exchange, the Pola Museum agreed to lend Woman and Child by the Sea to the AGO for the exhibit. The piece was pivotal in contextualizing the AGO’s painting, The Soup.

“Imai Keiko and her colleagues in Hiroshima, they want to understand their paintings, they want to do the research, and it was just a happy coincidence that I fell on their doorstep,” says Brummel.

“It’s a true partnership, and I think what’s phenomenal about this is that it takes Picasso studies and makes it global. It takes Picasso studies, and it doesn’t just limit it to Europe and North America. Because you have this high concentration of important Picassos in Japan, we’ve been able to give our Japanese colleagues access to the technology that John Delaney has refined so that they can engage in similar work.”

Picasso: Painting the Blue Period runs until Jan. 16 at the Art Gallery of Ontario. For more information visit www.ago.ca/exhibitions/picasso-painting-blue-period. 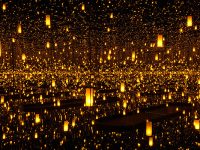 An eternity in mirrors: Yayoi Kusama Infinity Mirrors opens at AGO
March 12, 2018 Ai Weiwei’s According to What?, asks visitors to question the authority of meaning
August 15, 2013