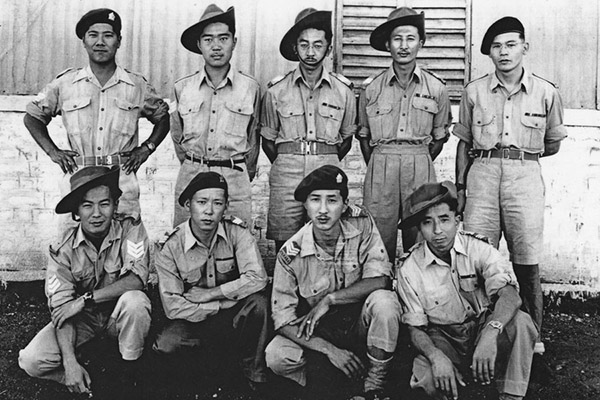 TORONTO — The other day I experienced a food delight. Yup, with my gohan (steamed rice), there was nice cold tofu cut up in small blocks that I lightly touched in shoyu to enjoy.

Tofu is one of many Japanese goodies that I’ve been eating since I was a young child in Vancouver. In the Kitsilano Japanese community, there was a tofuya-san (maker) a block away from where we lived. I’d go down the lane often carrying a pot with water to put the tofu into.

For some reason, Betty and I hadn’t eaten tofu for some time. In our many years together, she’d become familiar with this Japanese foodstuff, too. So last week she had bought some tofu she found at our local supermarket. Sushi is also offered there as many Toronto stores do these days. And eating the tofu was refreshingly tasty and got me thinking about other such Japanese eating experiences I’ve never forgotten.

For instance, when I was in the Canadian Army, the food was healthy, but like many other Canadian Nisei, we naturally missed meals with steamed rice.

During 1945, with the war still on against Japan, a group of us attached to a British secret service operation as interpreters was crossing India on a train from Bombay (now Mumbai) to Calcutta (now Kolkata). Unfortunately, our dinners during the three to four day trip were the same each day. What’s worse, the “meat” was corned beef in those unusual cans. Put me off corned beef forever. And in India after having all this British army food, many of us JCs kept wanting rice desperately. No. Not with curry.

One unexpected venture with a Chinese restaurant near an army camp in India we tried was quite memorable. This happened after the war was over, and our group of JCs was returning home. We were in a camp not far from Bombay, waiting until a ship leaving Asia would have room for us. Needing to eat steamed rice badly, we asked around. One British soldier told us about a Chinese restaurant a few miles away. So we rented a horse-drawn wagon and down we went.

The building was unmistakably Chinese, with that bright red colour and a high staircase to be climbed to the restaurant. As the wagon unloaded us, an Asian fellow in civilian clothes was partway down that staircase, and as we neared him, he started to welcome us in Chinese. So we stopped, shook our heads, and when the fellow asked in English, “Who are you?” One of our gang yelled, “Japanese Canadian!”

“Oh,” he said, then came down to welcome us with, “Irrasshai, Irrasshai.”

He led us inside the restaurant and seated us after connecting some tables together. Then he went into the kitchen and out came what seemed to be the entire staff—those with white chef hats and others. Obviously to see us “Japanese” in this part of India. I asked the welcomer in Nihongo where he learned the language, and he said he’d worked in Yokohama before the war.

We all had a good time there and the Chinese dinner was also most enjoyable. Afterward, as we talked about this experience to our hakujin mates at our camp, we were told there were Chinese restaurants all over India. Happily, that was true, and even the British lads were taking advantage, though not as often as we wanted to.

Then when we left India on our way home, the Australian steamer took us from Bombay to Southampton. From there we were taken to a nearby Canadian Army camp. Again, this meant more waiting time for a ship crossing the Atlantic to have room for us. Among our JC group was Jin Ide from Hamilton, whose wife was Scottish and had relatives up in Aberdeen. So he asked Fred Kagawa, who was from London, Ont. and me from St. Thomas if we’d like to visit Scotland, too.

Yes. Then we got our passes and went north on the famous Royal Scot train to Glasgow. There the three of us Niseis—Fred, Jin, and me, were walking through the city, passing many factories. And I recalled that Jock, a Scot whom I got to know in India, once told me that Glasgow wasn’t much of a place, while Edinburgh, the capital, had much to see and enjoy. And suddenly in Glasgow, we three Niseis in uniform heard whistling. Looking up, we saw many young ladies with kerchiefs on their heads saluting us. So we stopped to wave back to them and thought Glasgow wasn’t so bad after all.

That night, as we were in bed at the YMCA, I felt sort of hungry, so put a coat on over my pajamas and with boots on went out the door. I’d noticed a sidewalk stand earlier about a block away. And when I Iooked in the dark, it was still there all lit up. So off I went and ordered some french fries. It was served in a newspaper holder shaped like a large cone. I happily ate chip by chip, walking back to the YMCA building. Tasted delicious, too.

The next day, Jin led us to Edinburgh. There he found a way to explore Scotland’s castles, etc. Then Jin booked a cruise through three Scottish lakes, called ”lochs” up there. So off we went on Gare Loch, then Loch Lomond, and finally Loch Long. A pleasant time through the Scottish wilderness. I think we all hummed the Loch Lomond song (“You take the high road, and I’ll take the low road, etc.”) when we were cruising on it. Then it was further east to the Firth of Forth Bridge. There Jin said he would have to go north a bit now to visit his relatives in Aberdeen. Fred and I wished him a happy visit.

As Jin left us, Fred said to me, “I’m kind of hungry, but I’m tired of going to pubs. Could we find something different?”

Well, as we went a block or two from the Firth of Forth, there was a pub. But next door was a Chinese restaurant! So we were able to satisfy ourselves with the rice and goodies we vitally needed before going back on the train to Southern England and eventually the ship Ile de France taking us homeward to Halifax.

Yes, even back in the late 1940s in different parts of the world, it was proved to us that Chinese restaurants were the saving grace.

By the way, another happening I also have never forgotten occurred in 1942 to 43, when I was among the JC men sent to a particular road camp in the so-called Revelstoke-Sicamous chain. As you know, we were deprived of so much when forcibly moved away from our homes and communities during the Second World War. But at our Yard Creek camp, one happy exception was that we had steamed rice with our supper two or three times a week. And we didn’t mind that the rest of those meals were yoshoku, as western food is called in Nihongo.

At our camp, the chef was a hakujin as in other camps, but the second chef was Ken Nakashima, a Nisei from Chemainus, B.C. So the regular gohan (steamed rice) was one of his special contributions to liven up our daily lives. And it helped us survive our forced stay at a remote camp in inland B.C.


What a delightful story, Frank. Good thing there were a number of Chinese restaurants around at that time where you could enjoy Asian food, even in India. I’m not a big fan of corned beef, either. But Wayne and I LOVE Japanese food, the non- fusion dishes, of course. And now there are quite a few Japanese restaurants in Kingston.
Good to see you are still writing and sharing your fascinating stories. Wishing you and Betty the best of health.


Frank – it was great to read something by you after all this time. I am sorry that you do not like corned beef very much. Maybe you should try some, or perhaps some pastrami or smoked meat, at a good Jewish deli. I can give you a few recommendations in the city. All the best to you and Betty!!


Thank you Frank for sharing this wonderful memory. Good food always lifts the spirits! Jin Ide was my uncle so it was particularly meaningful. I remember him as someone who would be up for such fun and making the best of the circumstances.