Posted by Luke Galati
The documentary, Hafu premiered at the Japanese Canadian Cultural Centre in front of a packed house on Saturday, July 26, with the film’s co-director Lara Perez Takagi in attendance.

The film follows the lives of five people who are half Japanese, or ‘hafu’, living in Japan and shows the experiences that come with being mixed race in Japan’s homogeneous society.

If the standing ovation wasn’t enough of an indication, the movie was received tremendously well by the audience leaving several people asking the film’s co-director, “Where can I buy the DVD to show my kids?”

By highlighting the experience of five hafu’s, all with vastly different stories, this film’s characters help viewers connect with their struggles no matter your ethnicity.

“Even people who aren’t necessarily Japanese or have anything to do with Japan feel very close to the film, they feel that they can relate to it,” the documentary’s co-director, Lara Perez Takagi said.

Someone who waited in line to speak with the director after the screening told Perez Takagi that, “Somehow, if you’re a part of any minority, you can relate to this film.”

“Our initial intention was sharing the unheard voices of half Japanese people living in Japan, and then somehow, one way or another we ended up touching more communities out there and we reached out to a wider, broader audience that we weren’t expecting,” Perez Takagi said.

Japan’s population is becoming more and more diverse with every one in 49 babies being born from a mixed race family. In cities like Osaka and Tokyo, the rate of international marriages is now over seven per cent.

This is a doc that not only features touching stories about how being hafu has impacted their lives, but also opens dialogue and sheds light on the pressing difficulties that mixed race Japanese people face.

Whether via the stories of a boy being bullied at school because he’s half Mexican, or a man named Ed that starts his own community called “Mixed Roots Kansai”, it becomes evidently clear that one of the main thesis’ of this biographical film is that Japan isn’t very embracing towards its mixed race citizens.

After all, the final image on the screen is, “It’s time for Japan to embrace its diversity.”

The movie left an impression on Conner O’Brien, 19, who is half Japanese and half Scottish and Native American.

“It made me think a lot about my identity and who I am. It got me thinking about maybe going to Japan one day for myself,” he said.

Ayako Moldenhauer, who was also at the premiere said that the film was, “Amazing and impressive.”

She said that it really resonated with her because she has two half Japanese, half Canadian children of her own.

Two days before the movie, she came back from Japan, where her children were attending a Japanese elementary school.

She said that her children had a similar experience to the kids in the movie being called “American” since they look different and speak English.

Moldenhauer’s big take away from the film was that, she wanted to express to her kids that they are lucky and shouldn’t be ashamed that they have a double ethnicity.

Moldenhauer said that her children might not be able to find themselves as Japanese and Canadians, but they have a chance to learn both languages, both cultures and both experiences.

“I just want to tell them, my kids, that you’re lucky, so enjoy. That’s what I learned from the film,” Moldenhauer said.

Perez Takagi has now learned to embrace the mentality that Moldenhauer is trying to instill into her children.

“I myself went through different phases where I was neglecting my Japanese side or my Spanish side because I didn’t feel comfortable with the culture,” she said.

“Now I feel like I’m so lucky I can embrace all of my cultures, I just want more actually,” she said.

In the end, she said that if she could give other hafu or mixed people advice, it would be to, “Just be comfortable with who you are and know there’s always someone out there who is like you, so don’t feel like you’re the only person.”

Perez Takagi finished by saying that her goal is simple. “We just want to break down stereotypes and create an awareness.” 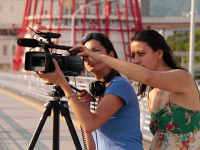 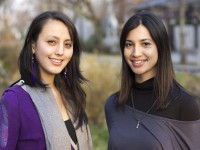