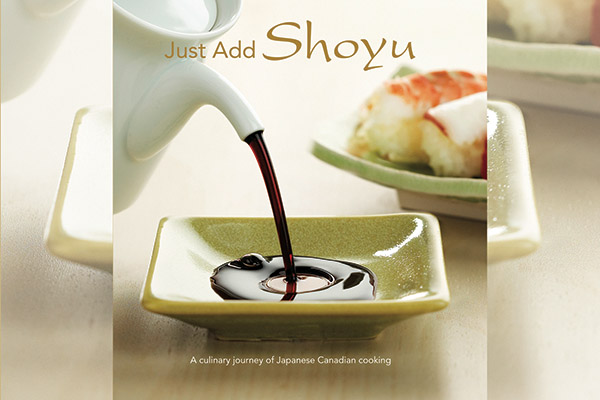 
Telling the story of Japanese Canadians through good food. Plus a recipe for Greenwood Karinto.

TORONTO — Most people think of Just Add Shoyu as a collection of Japanese Canadian recipes, but it is so much more. Just Add Shoyu is not your ordinary spiral-bound collection of community recipes. It is a beautiful hardcover book that, as one writer says, “connects me to a time and place that reminds me who I am and where I came from.”

Just Add Shoyu was the brainchild of Russell Onizuka and Theresa Sano, wanting a book that captured the feeling of sitting around the kitchen table, enjoying Japanese Canadian comfort foods, reminiscing about food, and sharing stories that glimpse into their family’s history. They wanted a book that told about Japanese Canadians’ early years in Canada—stories connecting family and food, and especially stories and firsthand accounts from the senior members of our community.

Just Add Shoyu is a book that shows, through stories and recipes, the evolution of Japanese food and recipes to Japanese Canadian comfort foods we recognize today. How, when one ingredient was not available, Japanese Canadian inventiveness and ingenuity found ways to recreate these ingredients, alternatives that only slightly changed flavours or recipes, or create new recipes all together, using very Western foods like wieners. This book showcases some of our mothers, grandmothers, and great-grandmothers’ recipes, with incredible photographs and personal stories of our history. 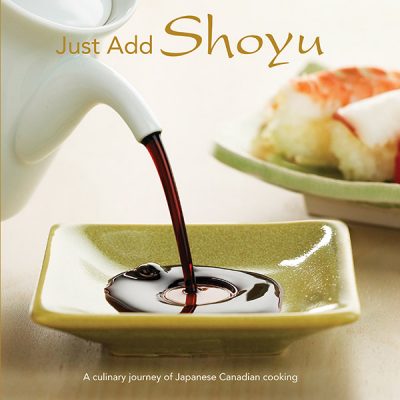 The call for recipes and stories began in 2006, and the initial response was less than overwhelming. Slowly recipes trickled in until finally, approximately 500 recipes were submitted. They were not 500 unique recipes though. Some were the same recipe that had been handed down through generations or shared with friends. Some were only slightly different, some were unique family favourites, and some reflected their geographic origin. Whatever the case, their subtle and not so subtle differences from traditional Japanese food deemed them Japanese Canadian comfort foods.

However, the stories were unique. Some explained the origin of the recipe and paid tribute to the creator or the capabilities of specific people who made it. They showed the inventive and creative ways people prepared foods they were hard-pressed to find in this new country. How new recipes like brown chow mein emerged after tasting Chinese chow mein. But most importantly almost every story shared a glimpse into family life and the connections food made with an event, a moment, a family ritual.

A large and extensive committee of volunteers that included JCCC community volunteers, many of whom were on the JCCC Heritage Committee, and professional creative designers and artists, food stylists, food photographers, production assistants, videographers, and writers were behind the making of this book. Many seniors were involved in the project, enhancing it as they shared stories that gave us firsthand accounts and explained things like why someone would have a “favourite rock” for making tsukemono.

The photoshoot itself was an amazing experience. The volunteer team cooked non-stop and each dish was styled by Meaghan Baron and set up and photographed by Vince Noguchi, Brian Sano, and Eric Graham over four days. This was an amazing feat as usually food photographers shoot three or four dishes a day, but for this, they shot up to 20 dishes per day.

And the work did not end there. A team of reviewers and editors went through every recipe to ensure accuracy, clarity, and consistency of information and instruction. Story submissions were also reviewed and edited, and additional material was written to pull each section together. Then our wonderful creative team of Heather Cooper and Eric Graham worked their magic to create an amazing tribute to Japanese Canadian food, its history, and the stories that connect us.

When finally published in 2010, Just Add Shoyu surpassed our expectations. The photos were beautiful, and the stories and history of our Japanese Canadian comfort foods brought back memories of sitting around a kitchen table with friends and family.

The year following its publication, Just Add Shoyu was shortlisted for a Canadian Culinary Arts Award in the cultural food category. This very unexpected honour meant our book was presented at a wonderful gala alongside books from notable cookbook authors, culinary institute directors, and renowned chefs. The final icing on the cake—now anyone can find Just Add Shoyu in the Canadian Culinary Arts Award’s archives at Guelph University and when they do, we hope they will hear their own family food stories around their kitchen table.

This recipe isn’t the Japanese way of making karinto, but during the war, ladies in Greenwood made up the method and it was to die for! The Japanese karinto in no way measures up to the “Greenwood Karinto!” Anyone who grew up in Greenwood still talks about it—the mayor’s grandchildren and even Caucasian people.

A few ladies were so good that every Halloween about 100 kids would dash to their homes for the delicious treat. The best ones were made by Mrs. Mukuyama, Mrs. Nitsui, and Mrs. Suzuki. The rest of us made it, but not as well. Remember, this was just after the war and parents didn’t have a lot of money to buy expensive treats. 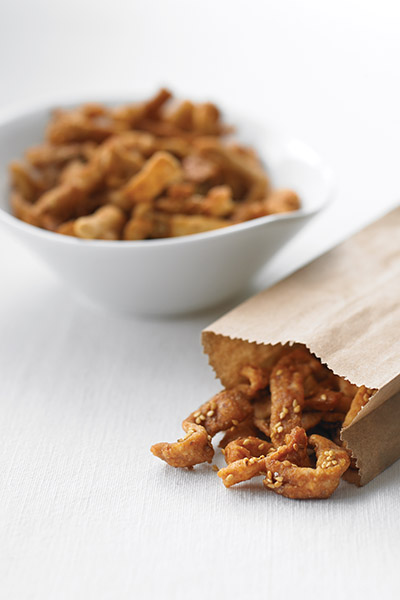 Use a heavy-bottomed pot deep enough to hold 2 to 3 inches (5-7.5 cm) of oil plus karinto, to avoid oil splashing over sides. A wide-surfaced pot allows karinto to cook without touching and sticking together.

In pan, combine shoyu, sugar, vinegar, and goma and bring to a boil. Add a dot of butter to the sauce while it is boiling. Turn off heat and immediately pour over crispy karinto. Mix well. Spread layer of karinto evenly on baking sheet. Place in oven on middle rack for 1 hour to allow karinto to dry out. Stir often to prevent burning. Let karinto cool before serving.


Wonderful article! Thanks so much! Is this cookbook still available? My mother was in the Lemon Creek camp during the war and I’d love to find some of her recipes!


Just made this for my Dad as a Christmas surprise. He fondly remembers getting this as a treat as a kid, as do I.


Where can I purchase the Just Add Shoyu cookbook? I live in the US