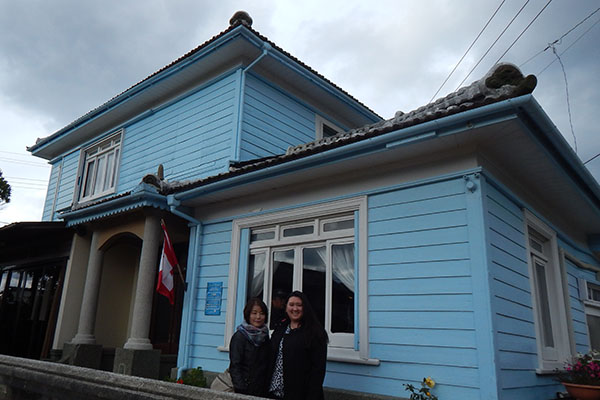 
The Canada Museum in Mio, Wakayama prefecture, is dedicated to telling the history of Japanese emigrants in Canada.

MIO, Japan — There is a small seaside town in Japan called Mio, with roots connecting to the Japanese Canadian community that run deep in the town’s history and identity. Mio is also my ancestral home and thanks to a trip organized by the Ministry of Foreign Affairs of Japan, I was able to see the place my family left over 100 years ago.

In December, I was invited to visit Japan with a delegation of third and fourth generation Japanese Canadians to learn about Japanese culture and bring those lessons back to Canada. It was an incredible, whirlwind week-long adventure. We explored Tokyo, Kyoto, Yokohama and Osaka, visiting temples and shrines, eating delectable foods, meeting with Japanese government officials and even having tea with a Japanese princess. It was an unbelievable trip and one I will continue to share in follow-up columns. 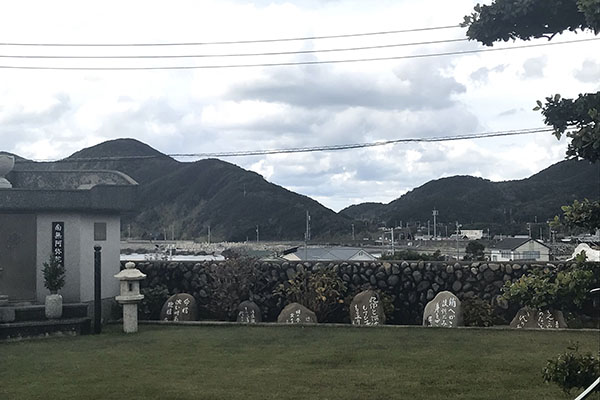 These stones on Hozenji Temple’s grounds are engraved with short poems.

A day trip had been arranged for me to visit Mio with a translator and guide. I was unsure of what to expect. As the day to visit got closer, I learned that the rest of the delegation would be spending the day in Osaka, while I would have to leave at 7:30 in the morning to take a three hour car ride to Mio. I started to regret having to go, but visiting Mio ended up being the most meaningful part of my trip.

Part of Wakayama prefecture in the Kansai region, Mio is a small coastal town, about a two and a half hour train ride southeast from Osaka. Mio’s connection to Canada began in 1888, when Gihei Kuno arrived in Steveston, B.C. and saw how fruitful salmon fishing in the Fraser River could be. He returned to Mio, which was a poor fishing village at the time and encouraged others to work in Steveston. Men would work Steveston and send money back home. Others would return, and build houses with Western influences, built out of concrete, with basements and brightly coloured exteriors, earning Mio the name, “American Village.”

Today, Mio is not a place you will find in Japan travel guidebooks, but many Japanese Canadians know the town. In the 1940s, there were around 2,000 immigrants from Mio alone living in Steveston. Many current residents in Mio have some sort of connection to Canada. As a result, there are touches of Canada spread throughout the town. The local restaurant is called Steveston, serving Japanese comfort food, as well as western cuisine. There is even a Canada Museum, dedicated to the history of Japanese emigrants to Canada. 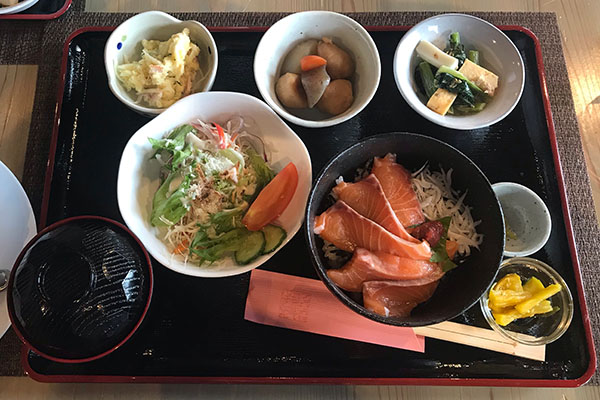 Lunch at Steveston Restaurant, a blend of Japanese and Western style foods.

Painted bright blue, the museum was once the home of Suguru Noda, born in Canada in 1923. He returned to Mio in 1928 and built a house that was the ultimate dream for migrants in those days. Nisei Tameo Noda, who played for the Asahi baseball team also lived in the house. 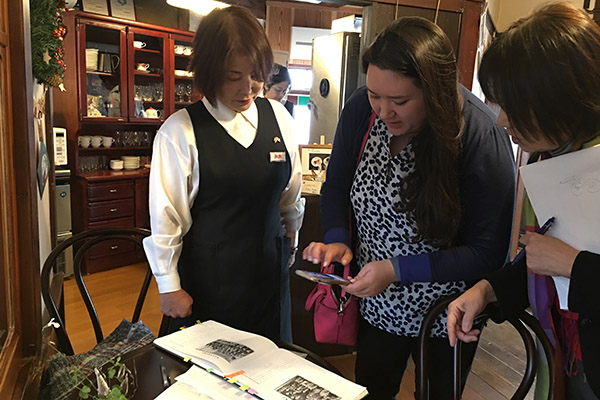 Going through old yearbooks at the Canada Museum with the museum director, Takae Mio.

The museum’s director, Takae Mio, also has a Canadian connection. Her mother-in-law was a Nisei who lived through Japanese Canadian internment. She has the acknowledgment letter signed by former Prime Minister Brian Mulroney, when the Canadian government apologized to Japanese Canadians in 1988, in the museum. 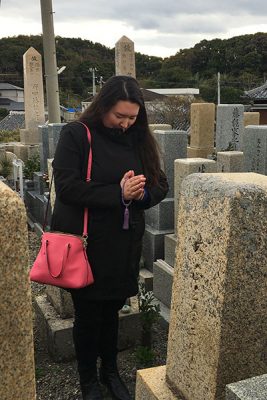 My great great grandfather, Bunichi Hamade, was born in Mio in 1876, and immigrated to Steveston in 1902, where he worked as a fisherman. His adult daughter, Hana, and her husband, Matsunosuke, followed him to Canada shortly afterwards. The family, including their Canadian-born children, was later interned in Lemon Creek.

After the war, Bunichi returned to Mio, hurt and angry with Canada for confiscating his fishing boat and taking away his freedom. The rest of the family urged him to stay, but his mind was set, though he quickly regretted his decision. Japan had just lost the war, food was scarce and life was hard. He died in Mio in 1954 and was buried in Hozenji Temple.

Over 65 years later, I stood in front of Bunichi’s grave. The cemetery is elevated so you can see the ocean and the mountains. I could understand why so many Mio emigrants felt Steveston could be their new home.

The museum director lit incense and put rosary beads in my hands and my guide told me to say a prayer. I immediately felt overwhelmed, unsure what to say. I bowed my head and thanked Bunichi for coming to Canada. I also thanked the generations of my family between Bunichi and myself for the sacrifices they made and the hardships they faced building their lives in Canada. I have lived a warm and happy life because of them. 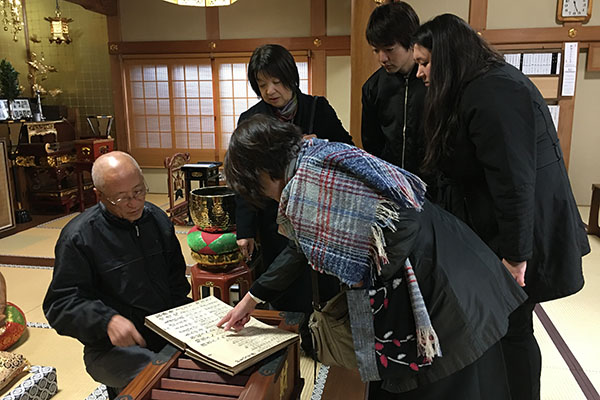 Meeting with the priest at Hozenji Temple.

As we left, I thanked the priest for taking care of Bunichi’s grave and the words got caught in my throat and I suddenly felt overcome with emotion. I have no family left in Mio, and other than my cousins who visited last year, no one visits Bunichi’s grave. Yet his grave was so well cared for, it was clean and the grounds were well-groomed. This priest, half way around the world, was looking after my great great grandfather in his final resting place. I know there are other Japanese Canadians’ ancestors buried there, it is touching to know someone is looking after them, they haven’t been forgotten or left behind.

I didn’t know what to expect when I went to Mio, but it was an experience I will never forget. It reinvigorated my Japanese Canadian identity. Mio has so many connections to Japanese Canadians weaved into the fabric of its identity, not only because of its history, but because of the people within it who keep those connections alive.

Memoir intertwines mother and daughter’s lives in the face of racism, sexism, and the internment ‹ Nikkei Voice | The Japanese Canadian National Newspaper


[…] mother, Sawae Nishikihama (nee Yamamoto), was born in the small village of Mio, in Wakayama prefecture, in 1913. Sawae’s parents valued education and sent her to Wakayama […]


[…] In Maru: Immigration Stories, Dayanara created three manga comics based on real stories of Nikkei’s immigration experiences. These stories were a Japanese picture bride coming to Canada to meet her husband for the first time, based on a JCCC board member’s grandparents; a grim battle between two Nikkei communities in Brazil at the end of the Second World War; and a fisherman immigrating from Mio, Japan to Steveston, B.C., based on Nikkei Voice editor’s great grandfather. […]


Hi, to the people who share my DNA from Mio and other parts of Wakayama.

My grandfather (Mr. Nishi) left Mio approx in 1904 with some of his friends, and they went to Mexico to work on the railroad for 4 years. It was an extremely difficult contract job, and they survived Mexico with the diseases, and hard labour work…

and approx in 1908 – 1910 made their way up to the USA border (probably at Texas), and according to my Dad, the young men went north through California.

They were exhausted and hungry, and knocked at a homestead in California. A woman let them in, and she fed them cooked beans from the fireplace stove. Her husband came home, and scared them off with a shotgun.

They kept making their way north to Steveston Village and became Fishermen. Later, he married a “Post Card Bride” from Mio, who arrived on the ship.

My father (Mutsuo Nishi) and his 6 siblings were born in the wood building, the “Japanese Hospital” in Steveston Village. His father sent the wife and children to Japan before WW2 started, because there was racism and rumours of what was to happen.

My father had endured terrible life in Japan, for 10 years, during the war era, and having a different citizenship, as the enemy of Japan (Canada). His mother had a nervous breakdown after she arrived back to Japan, cold house, little money, war, lack of food.

My mother’s (Yaeko) older 4 siblings were also born in Steveston Village. This family also went to Japan just before WW2 started, so they did not go to the Japanese Internment Camps in Alberta. She was born in Mio after her parents repatriated to Japan.

Yaeko was sent to Hokkaido by her mother, as a child maid (domestic houseworker), for a family of a Dentist. She was about 8 – 10 years old at the time. She survived the war in Japan, by living in Hokkaido with this family. She told me she had metal spikes on the bottoms of her ghetta shoes for the winter ice on the ground.

My mother always liked to watch ballet, opera and beauty pageants fashion clothes on TV, when I was a kid in Toronto growing up.

My parents did not speak English, even after living in Canada for decades. My father could read and write in basic English, but did not speak to me in English.
They spoke in a Wakayama dialect.

That is the story of my late parents.

I experienced racism from certain tough boys growing up, while in Public School on my street in Scarborough, and in the 3 high schools I eventually attended (Scarborough and in Etobicoke) in the 1970’s.

I grew up and eventually attended college and university and worked and got married.

I visited Japan for the first time at the age of 58, due to meeting a retired, female Japanese Teacher from a University in Tokyo, while she stayed in an AirBnB in a condo building, where I lived before.