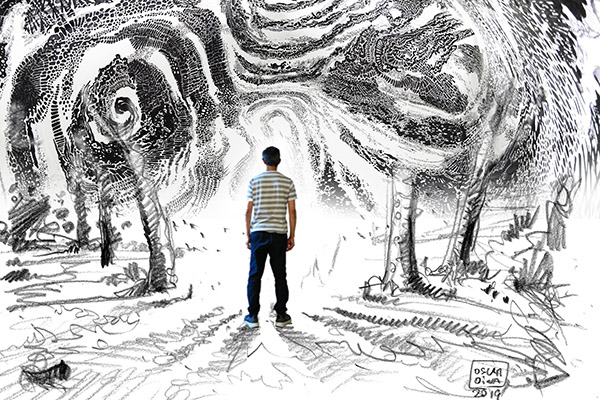 Oscar Oiwa, Dreams of a Sleeping World, rendering, 2019. This is a rendering of the mural Oiwa will create at the Pacific Asia Museum at the University of Southern California.

The mural will be part of Oiwa’s solo exhibition, Dreams of a Sleeping World, at the University of Southern California’s Pacific Asia Museum. Created on an inflated nylon dome, spanning 800 sq. ft., the mural will fill an entire auditorium at the museum. Every inch of space, from the ceiling to the floor, will be covered by intricate, hand drawn designs by Oiwa.

The final result will create an otherworldly dreamscape that visitors can enter. Using approximately 120 Sharpie permanent markers, Oiwa will create the mural with the help of one assistant and four Roski School of Fine Art MFA students. The entire process will be filmed and shared on the museum’s Facebook page, where viewers can watch Oiwa’s artwork come to life. The entire mural is drawn freehand, Oiwa explains to Nikkei Voice in a phone interview. 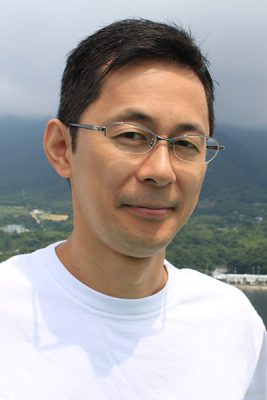 “I make the drawing directly on the balloon, I don’t sketch, I don’t use a projection, nothing,” explains Oiwa. “It is a little bit complicated, I need to take care, because I use black paint marker directly on the surface. I cannot make mistakes.”

Drawing the 800 sq. ft. mural by hand takes a lot of time and labour, and other artists may turn to digital means to create this kind of work, either through projections or by creating the piece and enlarging it on the computer. Oiwa choses drawing by hand as a way to reconnect with the past. He has been drawing by hand his entire life, like how human kind has been drawing since they could hold tools, explains Oiwa.

Reconnecting to the ways early cultures and civilizations created artwork, like cave drawings, Oiwa takes his markers to the wall. Oiwa has been creating artwork his entire life, starting as a schoolboy in Brazil, making drawings for his school newspaper.

Oiwa’s parents immigrated to Brazil from Japan in the 1950s, during a wave of Japanese immigration to South America. Oiwa was born in Sao Paulo, Brazil and graduated from the School of Architecture and Urbanism at Sao Paulo University in 1989. While in university, he attended the Art Biennial, which brought art from all over the world to Sao Paulo and was his first introduction to Japanese contemporary art, Oiwa says. 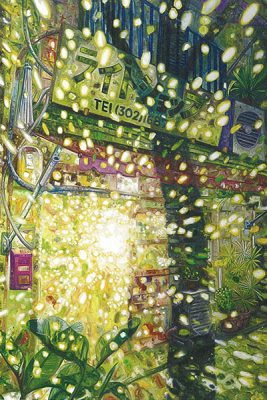 He moved to Tokyo after graduating, where he began to work as an artist. After living in Japan for 10 years, Oiwa then moved to New York City in 2003, where he still lives today. His work has been exhibited around the world, from North and South America, to Asia and Europe.

Oiwa’s cultural experiences has given him a unique perspective. He has moved through different cultural environments as an adult, and was able to see them from the outside, which comes through in his work, explains USC PAM Curator Dr. Rebecca Hall.

With this new exhibition, Oiwa asks if we are sleepwalking through contemporary society and how do we to wake up from that, explains Dr. Hall. Inside his 360 degree mural, he has created a dream world of his own design that he encourages visitors to step into and explore.

The title of the exhibition, Dreams of a Sleeping World, pays homage to other works of Oscar’s with the same name. Award winning American composer Chad Cannon, was inspired by 10 pieces of Oiwa’s work, and composed a musical piece based on them, also titled the same name.

Also in the exhibition will be a few of Oscar large, colourful oil paintings of landscapes that include the sea, city and forest. These paintings are bursting with colour and light, that visitors will walk through, before entering the massive 360 degree mural, which is completely black and white.

This dreamscape becomes a transcendental space, where visitors can step inside and enter another world, and encourages people to contemplate their own, Dr. Hall explains. Inside the dreamscape, visitors can block out the noise of everyday life and the outside world and explore the one Oiwa has created.

“I think because he has so much detail, it is just almost the joy of looking, and then what kind of contemplation that creates in your brain,” says Dr. Hall. “Oscar’s work is incredibly deliberate, all of the detail and attention that comes into making [his artwork], it’s kind of Oscar himself.” 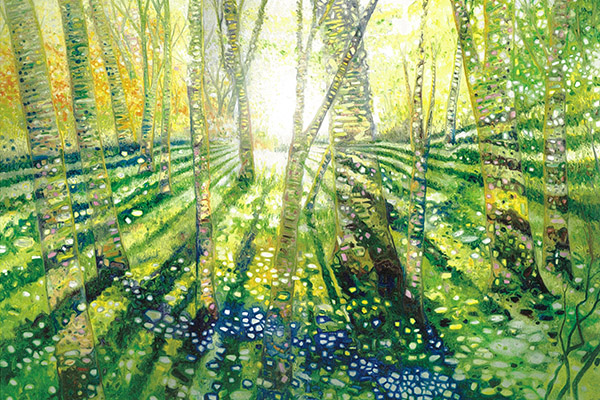 This is the first time Oiwa’s work will be exhibited on the West Coast, and he says he hopes people will come out to see it.

“I’m curious how people are going to react to this exhibition. The people in each [place] react different, but I hope different people like my work,” he says.

Dreams of a Sleeping World runs Jan. 10 to Apr. 26, 2020 at the USC Pacific Asia Museum. For more information click here.

Watch a video of Oscar Oiwa creating Dreams of a Sleeping World below:

The creation of "Oscar Oiwa: Dreams of a Sleeping World," has begun! The artist will be working on the 360 degree immersive installation throughout the next few days, join us for a Live Stream at 11am PST tomorrow, 12/13! 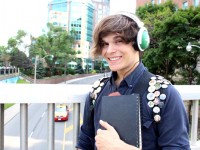 Meet Carlos Sulpizio: a Canadian artist who can’t get enough of Japan
July 11, 2014