An image taken of the outside of Taco Bell’s first location in Shibuya district in Tokyo. Photo courtesy: Taco Bell Japan’s Instagram profile

If the lineup outside of Taco Bell’s Shibuya franchise is a bellwether for anything it shows that there’s an appetite for the second coming of the American fast food chain’s offerings in Japan.

In the 1980s, Taco Bell, which serves Mexican-inspire fast food, opened locations in Japan, but failed to stay open mostly due to additives discovered in its food. At the time, these additives were restricted by the Japanese government and the chain closed its doors.

Taco Bell’s fresh start this week saw more than 200 people line up in Tokyo for over two-three hours to get a taste, according to website Entabe. According to a Taco Bell representative, they chose Shibuya due to the high number of young Japanese people living in the area.

“Shibuya has so much energy, it’s very youthful, and you know our brand is a very youthful brand,” Melissa Lora, president of Taco Bell International, said in an interview with Reuters.

“So we thought Shibuya would be the perfect area to introduce ourselves to the Tokyo market.”

Customers who waited in the long line said it was well worth their time. However, you have to wonder why Taco Bell has waited so long to return to Japan.

There have been a number of recent issues of food safety and hygiene at McDonald’s restaurants in Japan that sent a chill through fast food consumers in the country.

Meats past their expiration dates, unsanitary objects found in meals, and a potato shortage has resulted in the number of McDonald’s patrons decreasing hurting sales and the company. However, McDonald’s failings open a window for other restaurants as faithful consumers move to new chains for a quick bite to eat.

Yum Brand, which owns Taco Bell, certainly made a point of advertising the return of Taco Bell in Japan with a strong social media campaign and videos promoting its menu.

Recently, Kentucky Fried Chicken, which is also owned by Yum, went through a similar tainted meat scandal as McDonald’s with a key supplier sending them tainted chicken.

Taco Bell has used social media to get the word out about the reopening and it seems to have worked as Twitter flooded with images and thoughts on the opening day.

Below is a Tweet showing images from the opening day with a line going out the door and down the road.

Witness the Taco Bell fiasco that is currently happening in Japan. It's mostly foreigners in the line. #TacoBellJapan pic.twitter.com/5QP56xSP5l

This image shows the interior of the Taco Bell location in Tokyo, Japan. The look of Japan’s franchise is much different than what we see in North America.

And here’s a quick look at the menu at the new Taco Bell location in Tokyo. 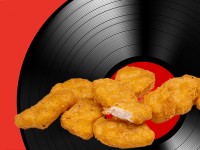