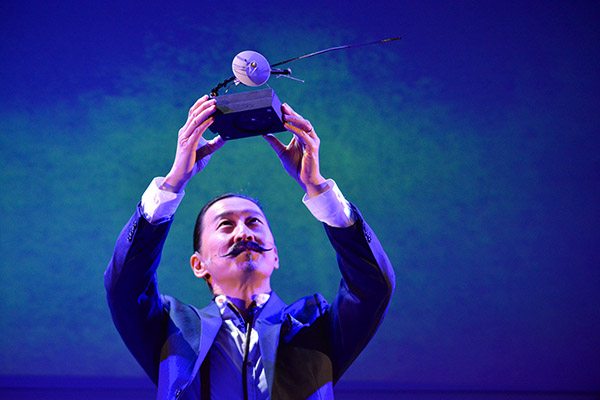 Tetsuro Shigematsu performs in 1 Hour Photo. The cinematic adaption of the play will be presented by Surrey Civic Theatres on April 23 and 24. Photography by Raymond Shum and Photo Design by Terry Wong.

VANCOUVER — Tetsuro Shigematsu‘s award-winning play, 1 Hour Photo, originated from hours of recorded interviews at the kitchen table of the man whose life is at the centre of the play, Mas Yamamoto.

What came from the interviews were stories of love, loss, injustice, and triumph. The play explores the major currents of the 20th century, told through the lens of Mas’ life; from growing up on the banks of the Fraser River, to being interned in Lemon Creek and meeting his first love, to helping build the Distant Early Warning Line in the Canadian Arctic during the Cold War, to operating a chain of one-hour photo development shops in Vancouver in the 80s.

“In so many ways, given the love story, the experiences, the depression, and the triumphs, Mas’ story is such a profoundly human one, that in a way, represents us all,” Shigematsu tells Nikkei Voice in an interview.

The Vancouver Asian Canadian Theatre (VACT)’s 1 Hour Photo is finding its second life with a cinematic adaptation presented online by Surrey Civic Theatres on April 23 and 24, followed by a live talk with Shigematsu.

A finalist for the 2019 Governor General’s Award for Drama, the story is uniquely told through miniature models that Shigematsu navigates with a handheld camera and projects on a screen behind him. Historic Super 8 film footage shot in Lemon Creek, black-and-white photos, and recordings of interviews with Mas all interweave together to tell the story of his life. 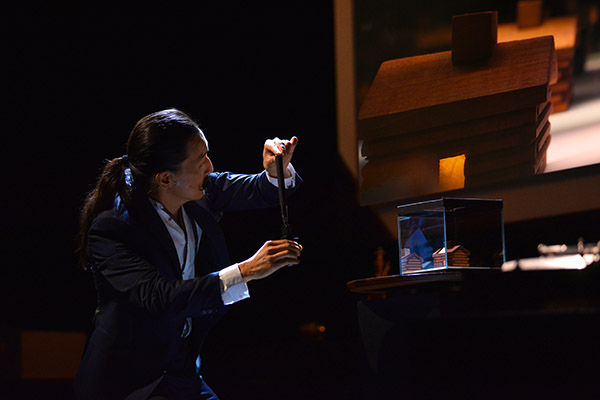 Tetsuro Shigematsu tells Mas Yamamoto’s story through miniature models that are projected onto a screen. Photography by Raymond Shum and Photo Design by Terry Wong.

“It is a very rich, multimedia experience for all the senses, and I think the cinematic adaptation captures it really well,” says Shigematsu. “I think it’s a really beautiful way to experience the entirety of one person’s life.”

The play has slightly changed from its first run in 2017 to adapt to feedback. Originally the play explored and compared the lives of both Mas and Shigematsu’s father. Now the play has been streamlined to just delve into Mas’ life.

“We realized Mas’ story is so epic—it’s almost incredible how much he’s lived in one life—so we realized we’d be missing nothing if we focused on his life and times and his personal experience,” says Shigematsu. “It’s a much more focused journey that we take our audiences on.”

The play was set to go on tour in 2020. Theatres booked and the show ready to go, when the pandemic hit, it all came to an end. Producing artistic director Donna Yamamoto—who is also Mas’ daughter—was faced with the decision; cancel the tour, or try something more imaginative. VACT collaborated with Vancouver-based production company Brightlight Pictures to produce a 75-minute cinematic adaptation of the play that audiences can enjoy from the safety of their homes. Each partnering theatre will have a window of time to present the play to their audiences, starting with Surrey Civic Theatres.

Filming the play was one of the biggest challenges Shigematsu has faced in his career as a performer. The entire experience was new and unfamiliar, like working around film cameras the size of Harley Davidson motorcycles, with large lenses that he could see his reflection in, says Shigematsu.

However, missing the feeling and experience of live theatre, where Shigematsu can sense and respond to an audience, was the most challenging part. Shigematsu adapted by imagining his friends were sitting in the theatre to help him remember that eventually there will be a real audience watching the filmed version of the play. Bringing 1 Hour Photo to a digital platform also means it can now reach audiences across Canada and is not limited to people living around the presenting theatres.

“The conundrum of this art form is knowing that the best thing about theatre is also its worst thing. There are few things more intimate as being in the same room as another person, breathing the same air but at the same time, it’s exclusionary—friends and family in other cities, across the country, around the world, would love to see the show but they can’t,” says Shigematsu. “So the idea that people across Canada and beyond will be able to experience Mas’ story is so heartening to me.” 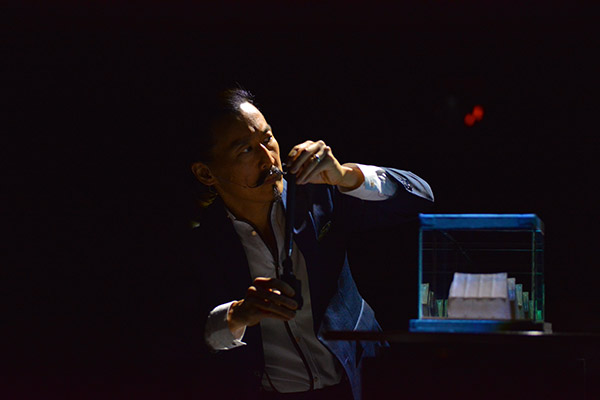 Tetsuro Shigematsu tells Mas Yamamoto’s story through miniature models that are projected onto a screen. Photography by Raymond Shum and Photo Design by Terry Wong.

Mas’ story has resonated with many Canadians, and not just of Japanese Canadian heritage. At the heart of Mas’ story is one of a man who, when faced with hardship, roadblocks, and challenges, had the vision and the courage to continuously reinvent himself, says Shigematsu.

“To experience this level of setbacks, [from] dark chapters in our Canadian history, but then to have this level of human resilience, to prosper and then to give back, I think Mas represents the very best of what it means to be Canadian,” says Shigematsu.

The time spent interviewing Mas and sharing his story has also changed how Shigematsu approaches challenges in his own life. The darkness and depression Mas experienced because of the racism and injustice he endured during and after the Second World War did not define his life. His story is a reminder that life is longitudinal and ongoing, and “who we today is not necessarily who we will be 10 years from now,” Shigematsu says.

As 1 Hour Photo began from conversations with Mas, Shigematsu hopes the play inspires audiences to ask questions and discover the stories belonging to people in their own lives. Stories are sustenance for the mind and soul and help foster understanding for the people around us. Everyone has a story, says Shigematsu.

“I hope that people will take the time to sit down with a member of their family and ask them questions about their past because we are surrounded by remarkable stories that have the power to give us strength, to inspire us,” says Shigematsu.

“That’s probably my favourite thing to hear when people see the show, that they’ve been inspired to have those conversations,” he says.

“To know where you come from and to realize that your own life isn’t individual at all, but part of this rhyme scheme of events and people, and that there are all these echoes. We’re just part of this longer continuum, it’s really humbling and awe-inspiring.”

Both performances include an after-show chat with Tetsuro Shigematsu. Tickets are Pay What You Want, with a suggested price of $15. To purchase tickets, visit www.tickets.surrey.ca.