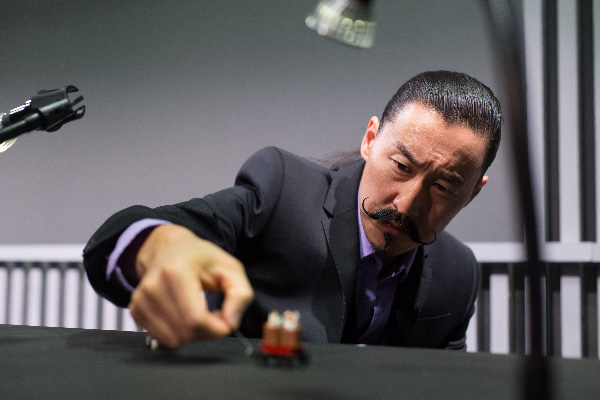 Tetsuro Shigematsu’s ‘Empire of the Son’ tells the story of the relationship between him and his father as two generations of radio broadcasters. Photo by: Kayla Isomura

It’s a rare moment for Tetsuro Shigematsu to cry, but during his world premiere of Empire of the Son he did exactly that.

The one-man show, which premiered with an extended run at The Cultch in Vancouver, B.C. last month is a powerful reflection on family and culture.

It’s an emotion-filled piece that chronicles Tetsuro’s relationship with his late father, Akira.

Akira never really expressed his love for his son, which left Tetsuro with his own emotional turmoil that resulted in an inability to cry. He wonders who began this cycle and when it will end. And the audience learns that it was Tetsuro’s son who broke his inability to cry in a series of candid videos where the actor can’t seem to stop.

Empire of the Son explores its concept through audio recordings of his parents, live video and projections, and Tetsuro mimicking his father in dialogues.

The final months of Akira’s life, who died on September 18, 2015, are revealed as the closest Tetsuro came to expressing his love for his father as he carried him from his bed to the washroom and back. Tetsuro speaks on the opportunities he missed to tell his father he loved him and how he felt, which is a revelation that leaves the audience silent.

As he grieves for his father, the audience becomes embroiled in his powerful emotions. They are moved by sorrow, but also by the laughter throughout the entire run of the show. 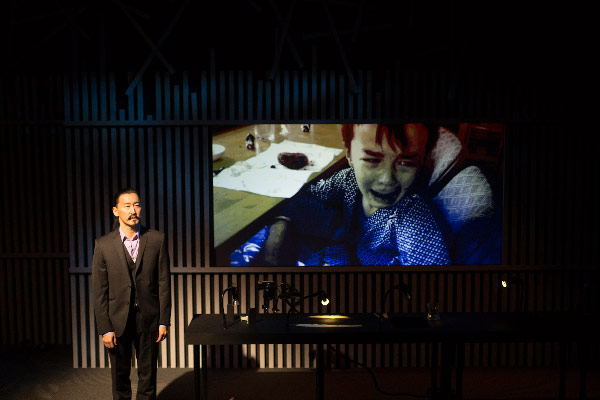 Tetsuro Shigematsu’s performance is both powerful and emotional as he stands alone on stage. Photo by: Kayla Isomura

Cultures clash when Tetsuro probes his father for stories about his life. Often Akira’s responses come with a long pause, followed by brief and unexciting responses. Akira lived in “interesting times,” while Tetsuro grew up in the relative peace of Montreal’s suburbs. Evidently a modest man, Akira survived the bombing of Hiroshima, watched Marilyn Monroe sing happy birthday to the president of the United States and even had tea with the Queen, but he would never reveal that without significant prodding.

And while Tetsuro’s storytelling is phenomenal – lyrical and charming, with the ability to have the audience weeping in one moment to smiling the next – the intricate set designed by Pam Johnson quickly became a highlight for me and a distinguishing draw of the show.

Miniature objects line the long table on stage. Without context, it would be difficult to understand how they belong in Tetsuro’s story with some objects being more obscure than others.

Behind the table, a camera projects these objects onto a screen behind. The objects came alive as Tetsuro performed with telling of the anecdotes behind each of them.

Using live projection added complexity to the performance, but it was not without its problems. The camera ceased to project mid-show. It was a quick fix for Tetsuro, but watching a miniature object from afar is hardly feasible.

In his script, Tetsuro draws parallels of his experiences with that of his family. While Tetsuro worked as a broadcaster for the CBC, it was never intentional and it only happened after his father’s career ended.

In another parallel, his daughter had never heard her grandfather’s stories of Hiroshima, but dreamt of her family skating on Grouse Mountain before a solar flare destroyed the Earth. Is it something internal? Something innate within their ancestral memories?

Overall, the script offers a strong dialogue that will have the audience reflecting on the relationships in their own lives. For Japanese Canadians, Tetsuro and Akira’s relationship isn’t only relevant to Nisei, but to Sansei and Yonsei alike.

The term “Shikata ga nai” (“nothing can be done about it”) came to mind when Akira chose not to intimately detail his experiences with his son about Hiroshima or how he engaged with his own father, who was a prisoner of war. This is a sentiment that I often hear in the Japanese Canadian community, and with Tetsuro questioning his family’s own values around emotion and his father’s past, I can only be reminded of the questions I hear Yonsei ask their own grandparents about the past today.

Empire of the Son is a deeply personal account of Tetsuro’s family. I commend him for letting us in so soon after his father’s death. I also wonder how the show differs from its original script had Akira been able to attend or join Tetsuro on stage.

The show allows you to be immersed in Tetsuro’s world and mourn his father with him, as Empire of the Son reminds us that it’s okay to grieve, to love and to live.

“We are just so bowled over by the response to Empire of the Son,” Shigematsu said in an interview with Nikkei Voice after his show’s premiere.

“I think what the show’s success represents is that people will come to the theatre when they recognize themselves on stage and our audience is very diverse. To me it’s a tremendous affirmation that if Japanese Canadian tell their stories people will respond.”

Shigematsu claims that they are also breaking box office records with their sold out premiere and second run.


[…] a former CBC broadcaster-turned playwright and actor, made waves with his first one-man show, Empire of the Son. In this play, Shigematsu dove deep into his distanced and rocky relationship with his late […]


[…] in 2017 to adapt to feedback. Originally the play explored and compared the lives of both Mas and Shigematsu’s father. Now the play has been streamlined to just delve into Mas’ […]