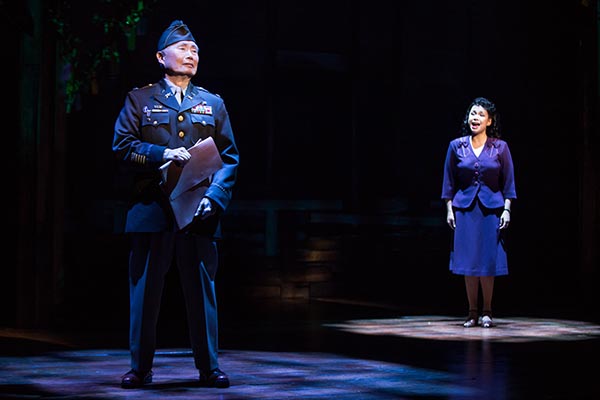 George Takei’s ‘Allegiance’ previewed at the end of October at the Longacrew Theatre on Broadway in New York. Photo courtesy: Allegiance

At the end of October, I had the privilege of attending a preview of Allegiance at the Longacre Theatre on Broadway. The final content and design of the show are still being fine-tuned, so I am unable to provide a full review of the production; however, I can certainly share my point of view regarding the significance and the potential of the production.

I was more than a little apprehensive about the idea of an internment musical, but after witnessing the approach the team behind Allegiance has taken, I am of the firm belief that the production may represent the greatest opportunity of my generation for the Japanese American community to deliver the internment story to the widest possible audience.

George Takei has over 9 million Likes on Facebook. Few in history have been able to directly market an audience like he can, and he’s been tracking the progress of Allegiance for his social media audience since he opened his twitter account in 2011 (currently at nearly 1.8 million followers). That is an unprecedented advantage for advance publicity for a Broadway show.

Based on his own brand recognition, Takei may be able to initially pack in the curious, but will his audiences leave the theatre with a lasting memory of what the internment was all about, or will their experience be merely about their fleeting proximity to “Uncle George”?

That question was the source of my biggest personal apprehension about the show: What if the audience made the effort to attend and the show missed the mark? What if the musical form took away from or trivialized the internment experience? 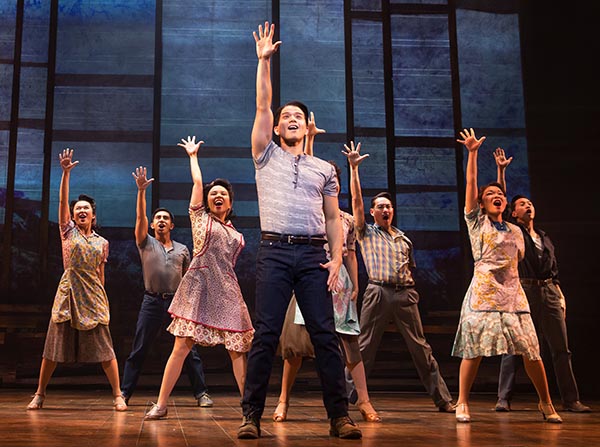 Young and veteran actors come together in this stage show to talk about the Interment and examine what happened to Japanese Americans. Photo courtesy: Allegiance

With its access to a diverse audience through Takei, Allegiance represents a make-or-break moment for the dissemination of the U.S. internment story. It simply must be “done right”, balancing history, community sensitivity and commercial appeal.

As I was waiting for the show to begin, I reflected on the fact that there isn’t much “new” that I’ve experienced with regard to the recalling of internment history in many years.

The curtain rose and I was quickly transported into the internment process. What a strange feeling.

Although the outcome of the J.C./J.A. internments was very different with regard to the treatment of property and the post-War treatment of “evacuees”, the process of the interments was similar enough that J.C.’s witnessing the show will easily see their ancestors on the stage throughout the production. I experienced more than a few moments of being deeply moved, empathizing with the characters as if they were my own family. My gosh, the affectations and approach to life between pre-War J.A.’s and J.C.’s was similar.

Where good theatre holds the possibility of transcending the stage, I was amazed at how quickly Allegiance demolished the barrier between the audience and the performers. By the end of the first act I already felt that, on a personal emotional level, the production was entirely successful. Keep your eye on the reviews after the formal opening of the show on November 8th. I suspect that the critics will be pleasantly surprised. 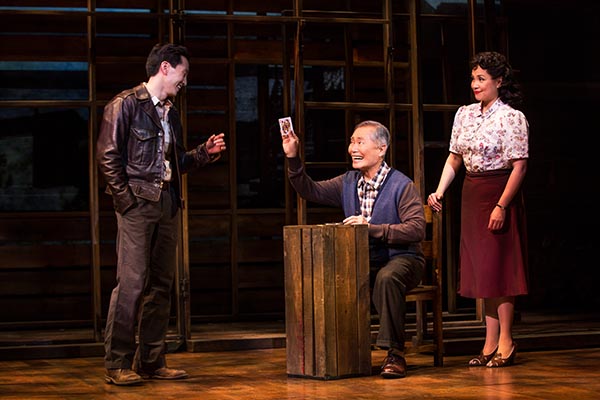 And reviews so far have been very positive about the show that stars Telly Leung, George Takei, and Lea Solonga. Photo courtesy: Allegiance

I strongly recommend that all J.C.’s make the effort to witness the production in person for the rare opportunity to come as close as humanly possible to experiencing the internment chapter of our shared J.C./J.A. history. At best you’ll commune with “family”. At worst you’ll witness an unprecedented social media phenomenon first-hand coupled with two hours of solid Broadway-caliber performances.

In stewarding the production from its unlikely concept to its Broadway opening, George Takei has come to personify the spirit that drives the J.A. family at the centre of the show: Gaman. Takei has persevered with patience and dignity in the face of seemingly insurmountable obstacles to deliver the story of the J.A. experience in a form accessible to his wider audience.

I have hopes that the production will leave a lasting legacy that all of those working to preserve the Japanese North American story will benefit from.

Chris Hope is the writer and director of Hatsumi – One Grandmother’s Journey Through the Japanese Canadian Internment. His current production, The Wrecking Crew, is shortlisted for nomination for the Grammy award for Best Music Film.

‘To Be Takei’ shines a different light on actor and social activist George Takei
May 8, 2014


[…] Arima’s musical, Allegiance, tells a story based on true events, of the Kimura family, who are forced to leave their home for an internment camp after the bombing of Pearl Harbor. While one brother wants to prove his patriotism by fighting for America, his sister protests the treatment of Japanese Americans by the country they’ve called home their entire lives. […]