TJFF Review: ‘What a wonderful family’ 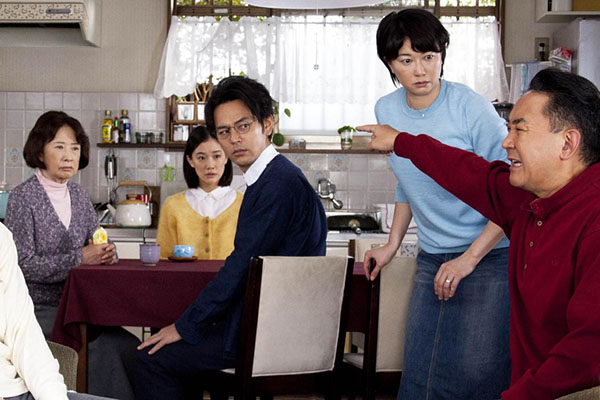 Years worth of drama bubble over in this Japanese film about family. Photo courtesy: TJFF

What’s left unsaid between family members can simmer for years. It’s often thought that keeping a lid on things is best, but when something devastating happens there’s a tendency for grievances to boil over.

And that’s exactly what happens when Shuzo Hirata’s (Isao Hashizume) wife asks for a divorce… as a 50th anniversary present.

The bombshell request sends the family, who mostly live under the same roof, into a panic and the film explores what happens when bad blood starts to air.

Director Yoji Yamada (Nagasaki: Memories of My Son and Tokyo Family) and writer Emiko Hiramatsu (who worked on the same films) bring about a real sense of family drama that can often be as hilarious as it is awkward to watch.

The eldest son is a bumbling mess, the daughter and middle child decide to get a private detective involved, and the youngest brings home his girlfriend who gets stuck in the middle of the family drama. It’s a like watching a shinkansen crash in slow motion, but there’s a strong message to the film.

Is the idea of marrying into a family archaic? How much power does the patriarch of a family hold? Is divorce so wrong in this day and age? A family meeting halfway through the film really drives home the themes the film tackles, but viewers might be a little irked, as I was, at Hirata’s often stolid response to criticism.

What the film reminded me most of was a video clip from a Japanese reality television show that went viral back in January. In it, a real husband and wife spoke to one another after for the first time in 20 years. The family’s three children watch as the husband comes clean saying that he stopped speaking to his wife because he was jealous of the attention she gave to their children.

Their emotions boil over leading to a messy reunion, but what they gained was communication, understanding, and empathy. This is something that the cast of What A Wondeful Family also discover and it’s just as messy as the real thing.

Luckily, the film is getting a sequel in 2017 and the plot of the film also tackles some interesting topics too.

Nikkei Voice is presenting What a Wonderful Family at this year’s Toronto Japanese Film Festival, which will play on Saturday, June 18 at 1 p.m.