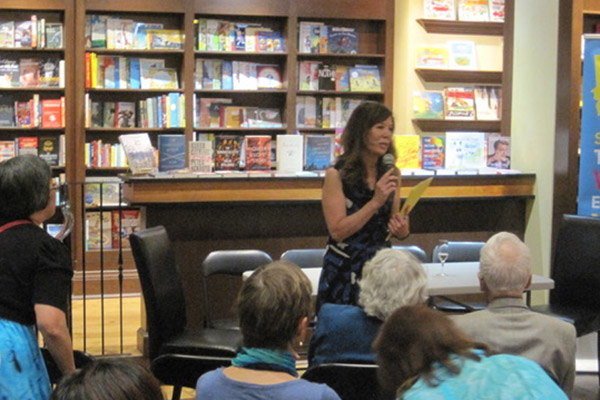 TORONTO — Author Kim Moritsugu is tucking a seventh book under her belt, after releasing The Showrunner at a book launch at Ben McNally Books on June 7.

The book lifts the curtain on Hollywood television production, giving readers a glimpse at the scandalous drama and action behind the scenes. A suspense fiction, the story follows three ambition women working on one TV show; the two show creators and a young actress looking to revive her stalled career and the lengths they will go to reach their goals.

The rights to Moritsugu’s book have already been swept up by White Pine Pictures, a Canadian independent film company for a scripted TV series.

“I could instantly see this being adapted into a riveting dark TV drama that would take viewers behind the curtain of the industry, while also engaging them with relationship-based storylines of strong leading women; something we’re finally seeing come to the forefront of production,” said Karynn Austin, vice president of scripted development at White Pine Pictures.

Moritsugu sat down with Nikkei Voice at the Brickworks in Toronto to discuss her writing process and how she created her latest book, The Showrunner.

Nikkei Voice: How did you get your start in writing?

Kim Moritsugu: It was a long time ago! I was working in a corporate job for about 15 years and went to school while I was working, but by the time I finished my MBA I realized I no longer wanted to do it—it took me seven years part time.

I was a middle manager. I decided I didn’t want work in business at all. I wanted to write fiction. I started to do it, a little bit on my own, but then my job got re-located to Sault Ste. Marie, Ont. Because I worked there 15 years, I got a severance of a year and a half so I thought, this is it: I’m going to take this year and a half and write that novel … and that turned into five years. At the time, I had two small kids—my youngest was a year and a half. My husband was doing alright financially, so he said to keep at it, and five years after I quit the job, my first novel was published.

NV: Did your father (Frank Moritsugu) influence your writing career in any way?

KM: Not really. He is a journalist. When I was in my first year of university I wrote for the student newspaper, at the university of Waterloo, but I found I wasn’t interested in non-fiction; it was too much research, too much fact-checking. I wanted to do the more creative stuff. So, certainly there was a writer in the family, but my parents split up when I was 10 and he re-married—so there was always writing there, but I turned away from the journalism approach, and more towards the creative side. 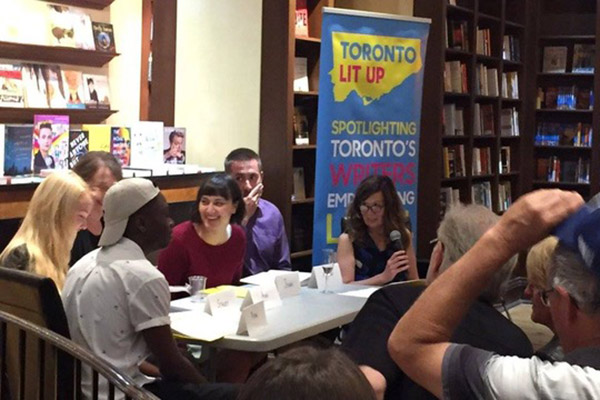 NV: How would you describe your books?

KM: The first one was a romantic comedy and the second was a domestic comedy, but lately I’m veering toward crime fiction, and I’m quite intrigued by suspense.

I’ve looked at psychological thrillers—I read a lot of them—but I don’t like the idea of women being brutalized by men, and I don’t want to write about that, but it’s hard to do a psychological thriller without that. So I think suspense is the way I want to go, but I don’t like the page turners—I like a slower build, so that’s what I’m kind of looking at now. I have become more interested in the crime thing lately. This book [The Showrunner], my seventh, is mild suspense, and my next one will be a suspense too. So I am veering in that direction.

NV: Is there a common thread across your seven books?

KM: They are all about women—strong, opinionated women. The books are from a mixture of genres, from literary fiction to commercial fiction. I tend to have a fairly distinctive voice, so I think that means they’re not for everyone; some people don’t like that voice but then some like it a lot. I’m a bit all over the map, so I can’t quite break into that mainstream market, because I’m too quirky. And also that voice may not be conventional enough, although my first book, The Glenwood Treasure was probably the most conventional, but with the rest of them, I tended to veer off in my own direction.

Also, there’s humour in them—The Glenwood Treasure probably had the least humour which made it more conventional. 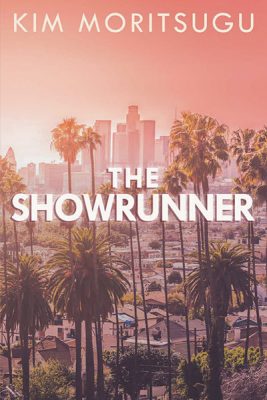 The cover of Kim Moritsugu’s newest book, The Showrunner.

NV: How do you come up with the plots for your novels?

KM: God knows. I don’t like to write without knowing where I’m going, so I definitely come up with a concept. In some cases, it may take me a year to come up with one and the plot before I start writing. I sit down and figure out who’s my main character, what’s her issue, who are the other characters, what’s going to happen, what’s the main character’s occupation and how that informs how the plot unfolds.

So in the case of The Showrunner, I wanted to write something in that suspense line. I choose the TV milieu because I thought it would give good opportunities for people to attack each other. I mentioned I don’t like to do research, and since I am such an avid—a selective avid—TV watcher, I found myself writing about how that thing works. There’s so much information about TV online. Ten years ago, nobody knew what a showrunner was, now showrunners are famous, in their own right.

All that information was becoming available and people were interested when I went on community forums for TV shows: people really wanted to know what was going on behind the scenes. People talked about what they would do if they were running the show.

NV: How much research do you do?

KM: For this book, I did do quite a bit of location scouting. My husband and I go to California every year for a couple of weeks in the winter, so I made him go with me. I said, “we’re going to go check out if this place would be a good place to kill somebody.” And I did a lot of reading and watching of videos. In the book, there’s a part where they do a Paley panel (Museum of Broadcasting, where media professionals talk with the public), so I checked out that kind of stuff just to see how that is done.

NV: What are some challenges you find in writing?

KM: I guess I find, now that I’ve done so many books, that the first one was easier because I had not written anything before so I could write about whatever I wanted, and now, I don’t want to repeat myself. Sometimes I go through my books and I find I have repeated a phrase or something, so that’s a challenge. And I’ve become more self-critical, since I’ve had people criticize me in the form of reviews. But beyond that, I’ve really slowed down.

When I was first starting out, I could write a 1,000 words in a day, no problem. I could even write 3000 in a day, but now, as we get older everything takes longer. And I definitely prefer editing, or revising, to writing the original thing. Because once you put one sentence down, you’re sealing off possibilities; the next sentence has to follow the one before it, so you know whether you want to go off in this or that direction. 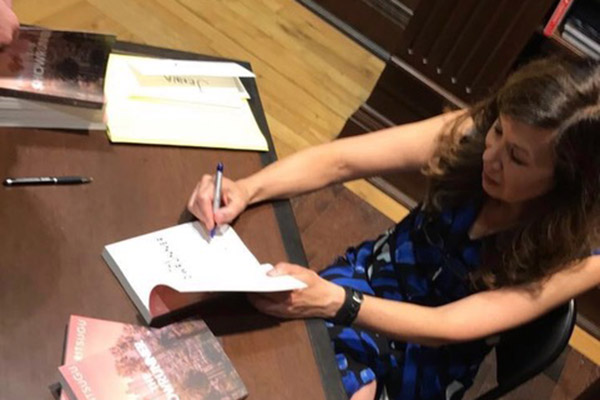 Kim Moritsugu signing copies of The Showrunner at her book launch at Ben McNally Books on June 7.

NV: What are you working on now?

KM: I had a project that I was thinking about and have done a small amount on, but then [The Showrunner] was optioned for a TV series.

I thought it would be one season, whether it was 10 episodes or more, but the woman who optioned said, there could be another season with more, new characters, so I thought I could write a sequel, which was certainly not my intention when I began. So I’ve been thinking more about an extension with two of the main characters, but actually the two wouldn’t be the main characters in the new story, but they would appear, so the universe would continue but the story wouldn’t focus on those two. The TV option is a long shot, but I don’t mind the idea of staying in this milieu.

NV: You are involved with teaching and mentoring writers at the Humber School for Writers. What advice do you have for beginner writers?

KM: One of the first things I say, is read the genre you want to write, so that you’re familiar with what’s going on, and read like a writer.

For instance, I’m trying to do suspense, so I’m trying to read all the current thrillers and see how they do it; what they withhold, what their structures are. Another thing is, take criticism. What I’ve found over the years with students, some people, they’ll take heed to what I say, and others don’t … I have a list of tips I give my students, like don’t use too many adverbs or adjectives at the sentence level and some students ignore it.

Now, I’ve read published work that also ignores this, but people have a tendency to overwrite. They need to cut their sentences and cut their words; just be more economical.