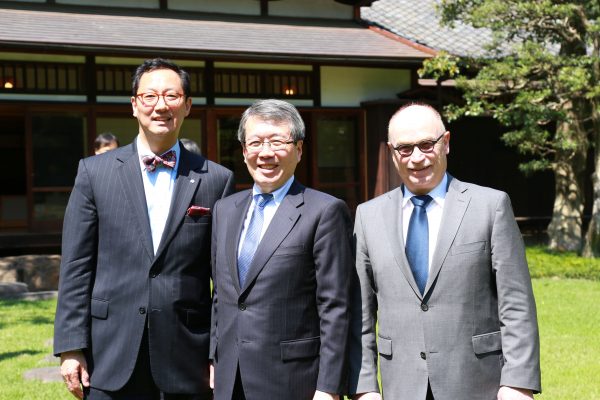 TOKYO — The University of Tokyo has signed a partnership with the University of British Columbia and Max Planck Society of Germany to further quantum research and innovation. Photo credit: UBC

UBC President Santa Ono was in Tokyo to sign the agreement on April 25 along with UTokyo President Makoto Gonokami and Max Planck Society President Martin Stratmann.

The partnership will form the Max Planck – UBC – UTokyo Centre for Quantum Materials, an expansion on the partnership that was established in 2010.

“The signing represents the culmination of decades of informal collaboration and will create one of the world’s foremost centres for research in this field,” Dr. Ono wrote in a blogpost about his trip to Tokyo.

The international partnership is an agreement between the three research institutions for joint research collaborations. Each group has committed to providing exchange opportunities for scientists and students to study at each other’s facilities in Vancouver, Tokyo and Stuttgart.

“I very much look forward to new research collaborations with friends and colleagues at the University of Tokyo, and to a unique partnership with leading scientists on three continents,” said Bernhard Keimer, director of the Max Planck Institute for Solid State Research and co-chair of the new partnership.

“I am excited to see that UTokyo is now part of the Center for Quantum Materials. I believe it will be the strongest partnership in quantum materials research and encourage new generation in this field,” said Atsushi Fujimori, professor of physics at UTokyo.

UTokyo has been a longstanding academic partner for UBC and this new partnership adds to the list of initiatives between the two schools since 1978.

UTokyo is also one of UBC’s most prestigious academic partners. UBC is also one of the most popular exchange destinations for UTokyo students, says Dr. Gonokami.

Dr. Ono, who is the first Japanese Canadian UBC president, also met with the new ambassador of Canada to Japan, Ian Burney and Princess Takamoto while in Tokyo.