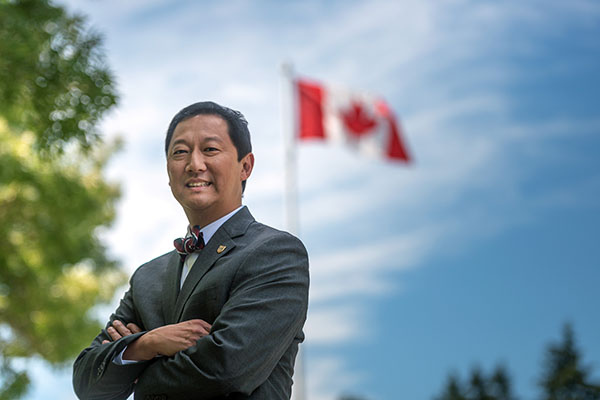 
Dr. Santa Ono, who is named after a Japanese folk story samurai, is the first Japanese Canadian president of the University of British Columbia. Photo credit: Paul Joseph/UBC.

TORONTO — In a heartfelt homecoming, Dr. Santa Ono returns to Vancouver as the first Japanese Canadian president at the University of British Columbia.

Dr. Ono, whose parents emigrated to Canada from postwar Japan, was born in Vancouver at St. Paul’s Hospital, while his father worked as an assistant professor of mathematics at UBC. Dr. Ono was inaugurated as president of that very same university at the end of November.

“I was very young when I left, but this was my birthplace, and birthplaces have a lot of significance in someone’s identity,” says Ono in an interview with Nikkei Voice. “It was very emotional to myself and my family for me to come back to my birthplace, it was really my life coming full circle.”

Leaving Vancouver when he was just a year old, Dr. Ono grew up in mostly Baltimore and Philadelphia. He completed his undergraduate studies at the University of Chicago and earned his PhD from McGill in Montreal, where he also met his wife, Wendy Yip. Together the two have two daughters.

Returning to Vancouver, Dr. Ono reunites with a vibrant Japanese Canadian community. He says he has felt the support of the community.

Dr. Ono leaves his post as president at the University of Cincinnati, where he was inaugurated in 2012. It was a decision that did not come easily after building strong relationships with the students, faculty and Cincinnati community.

“The students, faculty, staff well as community members really expressed to me in a very touching way that I meant something to them and one of the most important things for me to say is that I felt the same way about them,” says Dr. Ono. “That relationship still persists today. I still root for Cincinnati, the city, the teams, and the university and it’s a relationship that from my perspective, will be lifelong.”

He’s eagerly looking forward to building a relationship like that again, but this time in Vancouver. Dr. Ono says he is attending every event he can and meeting as many people as he can, students, faculty, Vancouverites and excitedly, members of the Japanese Canadian community. 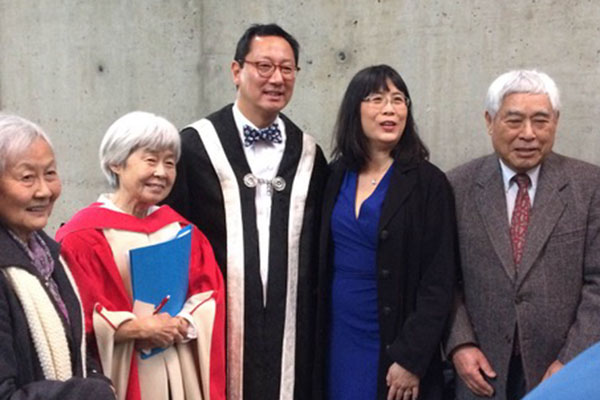 Dr. Ono comes with strong academic credentials, leaving his position as president at the University of Cincinnati where he had worked for the last six years. While there, he was recognized by Inside Higher Education as America’s most notable university president in 2015. Dr. Ono has also worked at Emory University, Harvard, Johns Hopkins University and University College London.

Popular and beloved at the University of Cincinnati, Dr. Ono had amassed 77,000 followers on his Twitter account during his six years at the school. He used it as a way to communicate easily and freely with his students and faculty.

In his six months at UBC, he has already built a strong foundation of 12,000 followers on his new @UBCprez twitter handle.

“[Young people] view the world through the lens of social media,” says Dr. Ono. “Social media is dialogue, you have an opportunity to not only send something passively to them, but they can reply almost in real time to something that you say, so it’s very, very useful in building a relationship with many, many people.”

Making himself accessible to students is how  Dr. Ono wants to lead UBC, through a method called servant leadership. He stresses that by leading with humility and respect, embedding himself within the organization, and working with faculty and students will help the school grow and progress.

“I try very hard to interact with staff members and students in a way that you are not only within those groups of people, but you are also very cognizant of their needs and of opportunities to serve them better.”

In his already packed schedule, he’ll be teaching at least a half dozen courses each year; in medical science, history of education and leadership. He says he hopes to teach even more courses as time goes on. 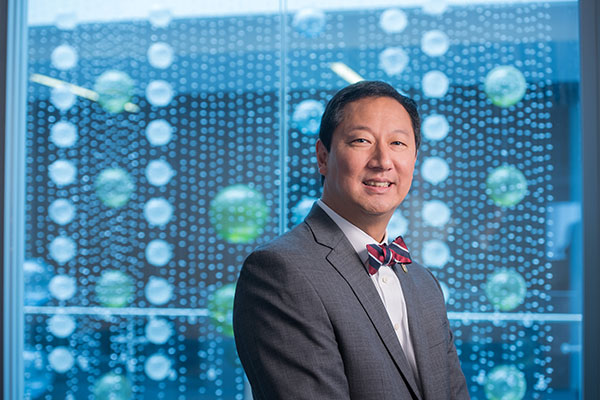 “I try very hard to interact with staff members and students in a way that you are not only within those groups of people, but you are also very cognizant of their needs and of opportunities to serve them better,” says Dr. Ono. Photo credit: Paul Joseph/UBC.

Dr. Ono’s appointment at UBC is also a symbolic homecoming for the Japanese Canadian community. In 1942, 76 Japanese Canadian students were pulled out of school after the bombing of Pearl Harbor, and placed in internment camps.

Dr. Ono recently made a strong statement in response to the executive order signed by President Trump, enacting the travel ban on seven predominately Muslim countries in hopes of ensuring history does not repeat itself. Seeing similarities in the current treatment of Muslim Americans to Japanese Canadians and Americans years ago, Dr. Ono put together a task force and set aside $250,000 to assist students affected by the travel ban.

Another issue important for Dr. Ono, is building upon and improving support for students and faculty’s mental well-being. A year ago, Dr. Ono publicly shared his battle with depression and anxiety as a high-achieving student.

“I’ve been very heartened by the fact that when I did make that statement it became worldwide news,” says Dr. Ono. “Even today, over a year after my being opened about that I’m being asked on a regular basis to speak about student depression and anxiety and mechanisms to support youth at risk, I’m asked to speak about that all over the world.”

He points out that a major barrier for young people searching for help is the stigma around mental illness. The best way to combat that obstacle, he believes, is to speak out.

Dr. Ono says he hopes that by sharing his own experiences and showing that there are people who are functioning at a very high level because they got the help they needed, and that more students will ask for help when they need it.

“It’s a dream come true for me to be at UBC and one aspect of that dream come true is to essentially be reunited with the Japanese Canadian community here,” says Dr. Ono. “I look forward to growing and enriching those ties while I’m here as president.”


[…] at the festival, says Chen. There was always a line up to a half-hour long, and even UBC president Dr. Santa Ono tried out a sushi costume with his […]