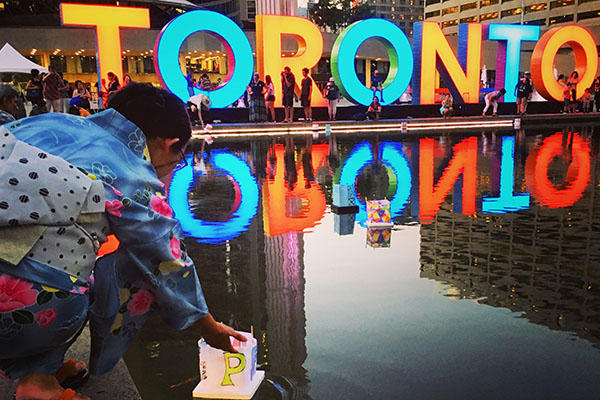 Only weeks after the UN ratified a treaty to outlaw nuclear weapons, the Toronto Hiroshima Nagasaki Day Coalition is organizing the 72nd commemoration of the atomic bombings of Hiroshima and Nagasaki at the City Hall Peace Garden on Aug. 6. The commemoration will follow the theme of “Humanity First: Ban the Bomb!”

On July 7, 122 countries voted in favour of the text of the UN treaty, with one opposed. Under pressure from the U.S. government, Canada, along with the nine nuclear weapon states and their allies, unfortunately boycotted the UN treaty negotiations in New York.

The ban treaty will come into effect after it has been ratified by fifty countries.

“I never thought I would see this moment,” Hiroshima survivor Setsuko Thurlow stated following the vote at the UN conference.

“This is the beginning of the end of nuclear weapons.” Addressing the leaders of the countries of the world she declared, “I beseech you, if you love this planet, you will sign this treaty.” She received a standing ovation after her address. 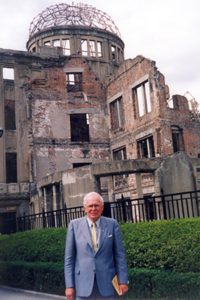 Douglas Roche in front of the ‘A-Bomb Dome,’ the nearest building to the blast to survive the bombing in Hiroshima, Japan.

The keynote speaker at the Aug. 6 commemoration at Toronto City Hall will be the Hon. Douglas Roche, former Senator, MP, and Canadian Ambassador for Disarmament.

“The total of 15,000 nuclear weapons possessed by nine states, all of which are in the process of modernizing their nuclear arsenals, is a monumental risk to humanity,” Roche has warned.

The annual Peace Garden commemoration begins at 6:30 p.m. with live music by the Isshin Daiko Musical Ensemble and Grammy-nominated flutist Ron Korb. The Pax Christi Chorale and the political satirical group, the Raging Grannies, will also perform. Mayor John Tory will issue his Hiroshima Day Proclamation and Setsuko Thurlow will read excerpts from the city of Hiroshima and Nagasaki Peace Declarations.

At the close of the commemoration, Ron Korb will lead the audience to a lantern ceremony in the City Hall reflecting pool. Origami paper crane and lantern making will begin at 4:30 p.m.

From Aug. 3 to 9, the Hiroshima Nagasaki Day Coalition will also be holding a large exhibit of paintings by survivors and photographs of the Hiroshima and Nagasaki atomic bombings inside the Toronto City Hall Rotunda, 100 Queen Street West. The coordinator of the exhibit is Taro Shibahara. 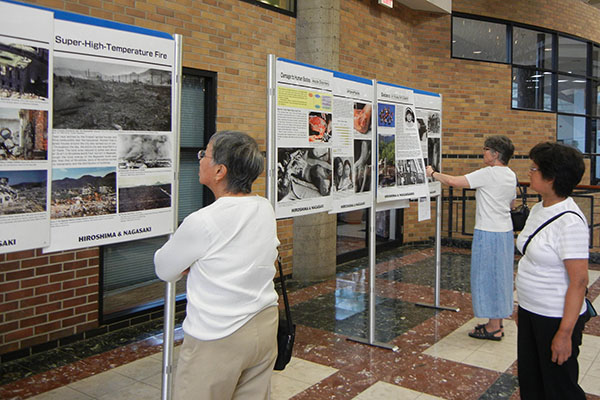 “As my wife and I are from Nagasaki, we were impressed because so many Torontonians, especially senior activists, gathered and were working together to have the commemoration and the poster display. Soon after, we started helping out. The exhibit underscores the devastation of nuclear weapons,” he said.

Roche is encouraging Canadians to continue to work for the total abolition of nuclear weapons.

“The worst mistake we can make at this juncture is to lose confidence in our ability to effect change,” he said.

In his latest book, Hope Not Fear: Building Peace in a Fractured World,  he affirms that, “Peace builders, so long thwarted by the rich and powerful, are starting to influence the course of history. The peace building process is an act of hope we dare not give up.”

To volunteer for the exhibit, please contact Taro Shibahara, tettaro@gmail.com.

For further information about the Toronto City Hall commemoration, visit the website: www.hiroshimadaycoalition.ca