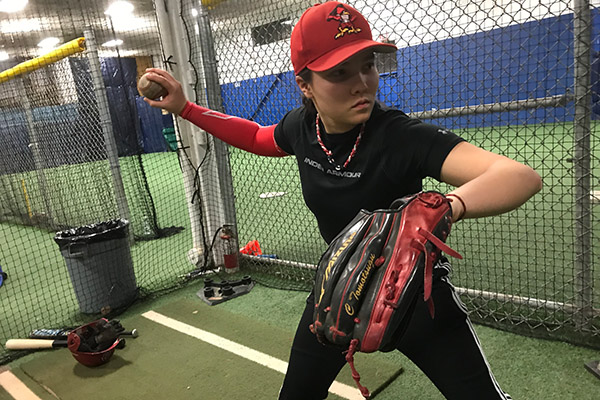 TORONTO — When she starts her 12th baseball season in May, Caitlin Tomotsugu can proudly call herself a bonafide “veteran.” All at the young age of 17.

That in itself is impressive. But with Tomotsugu there’s more. She’s an excellent student, with mostly straight A’s in all subjects; she’s already been accepted by three universities for the next academic year—Ryerson, McMaster and Ottawa.

She doesn’t spead all her time buried in school work. She is passionate about playing baseball. Tomotsugu plays for two teams in York Region, the midget-level Richmond Hill Athletics girls’ team and the Thornhill Reds boys’ team. Tomotsugu emphasizes that she plays “baseball” and not softball, as most people assume. She joined the boys’ baseball team, because her brother, Brodie, played on the team.

“I wanted to be like him and I stayed because I fell in love with it,” says Tomotsugu.

Tomotsugu has been one of the best in her sport. She’s already won three national championships with the under-16 and under-21 teams.

She’s also found the time to help younger girls who are coming into the sport. Tomotsugu works part-time on weekends as a coach for girls ages four to 16, as a way “to keep girls involved” in the sport, she explains.

“I never had a program like this when I started out,” says Tomotsugu. “We never had role models.” 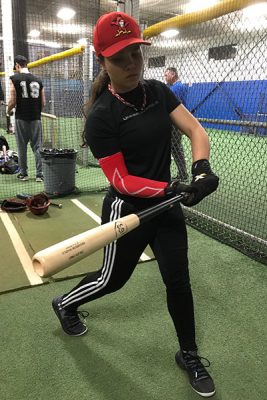 Tomotsugu is a pitcher and outfielder who’s known for her speed on the field. With both her teams, she has been training indoors twice a week since December, with hitting, pitching and fielding drills, to ready herself for the upcoming season. Tomotsugu says she’ll be pitching more this season, so she’s developing her slider to go along with her best pitches, fastball, curve and changeup.

Standing only 5’3” and 130 lbs. Caitlin understands she might be too small to play baseball in university, so she might have to switch to ladies fastball or start looking for off-field opportunities.

This March, Tomotsugu was invited to the inaugural Major League Baseball (MLB) Grit tournament in Texas for elite North American players, 18 and under. Tomotsugu and 60 other young female prospects were flown to Arlington’s Globe Life Park, home of the Texas Rangers, for games, presentations and training. The program introduces young players to college recruiting possibilities as well as off-the-field job opportunities.

Several women have developed non-playing careers in the sport, such as Kim Ng, MLB’s senior vice president of baseball development, Ashley Bratcher, senior director with USA Baseball and Katie Pothier, vice president with the Texas Rangers. The women met with the up-and-coming players to explain their careers in baseball off-the-field.

Baseball is Tomotsugu’s priority and if playing possibilities crop up over the next few years, she says she might go in that direction.

While there is the Ontario Women’s Baseball League, which is currently the longest standing all female baseball league in Canada (formed in 1996). There is currently no national women’s league. A women’s league is something Tomotsugu hopes to see for Canada in the future. There could be a possibility of playing in Japan.

“Maybe they have a league there,” she says.  “I could maybe play there if I really wanted to pursue that.”