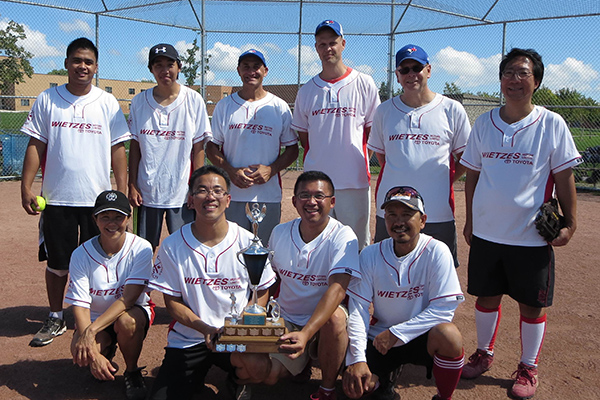 After finishing the regular season atop the standings with 8 wins and only a single loss, Wietzes Toyota captained by Tod Nagamatsu remained the hot team on it’s way to capturing the J.C. 3-Pitch Championship.

The semi-finals pitted HollisWealth, led by Paul Takasaki against Back2feet captained by Glen Kawaguchi & Mike Ogino) and Hoult-Hellewell Trophies (Jon Nagamatsu & Rob Takimoto) against Wietzes Toyota. HollisWealth defeated Back2feet 26 – 25 with a walk off homerun by Marc Okada in the bottom of the 7th inning. Wietzes Toyota built an early lead an hung on to defeat Hoult-Hellewell 34 – 29.

In the finals, a combination of good hitting (HollisWealth) and poor fielding (Wietzes Toyota) staked HollisWealth to an early lead. But in the end, the solid top to bottom line-up of Wietzes Toyota prevailed and allowed them to comeback for a 35 – 33 win, crowning them as 2014 J.C. 3-Pitch Champions.

The J.C. 3-Pitch League would like to acknowledge and thank it’s sponsors (as listed in the standings below) for their continued support of the league. For more information on the JC3-Pitch league, please check out the JC3-Pitch website. www.jc3pitch.co